Hopefully, this is a hint to Indian that it should produce something other than a cruiser. 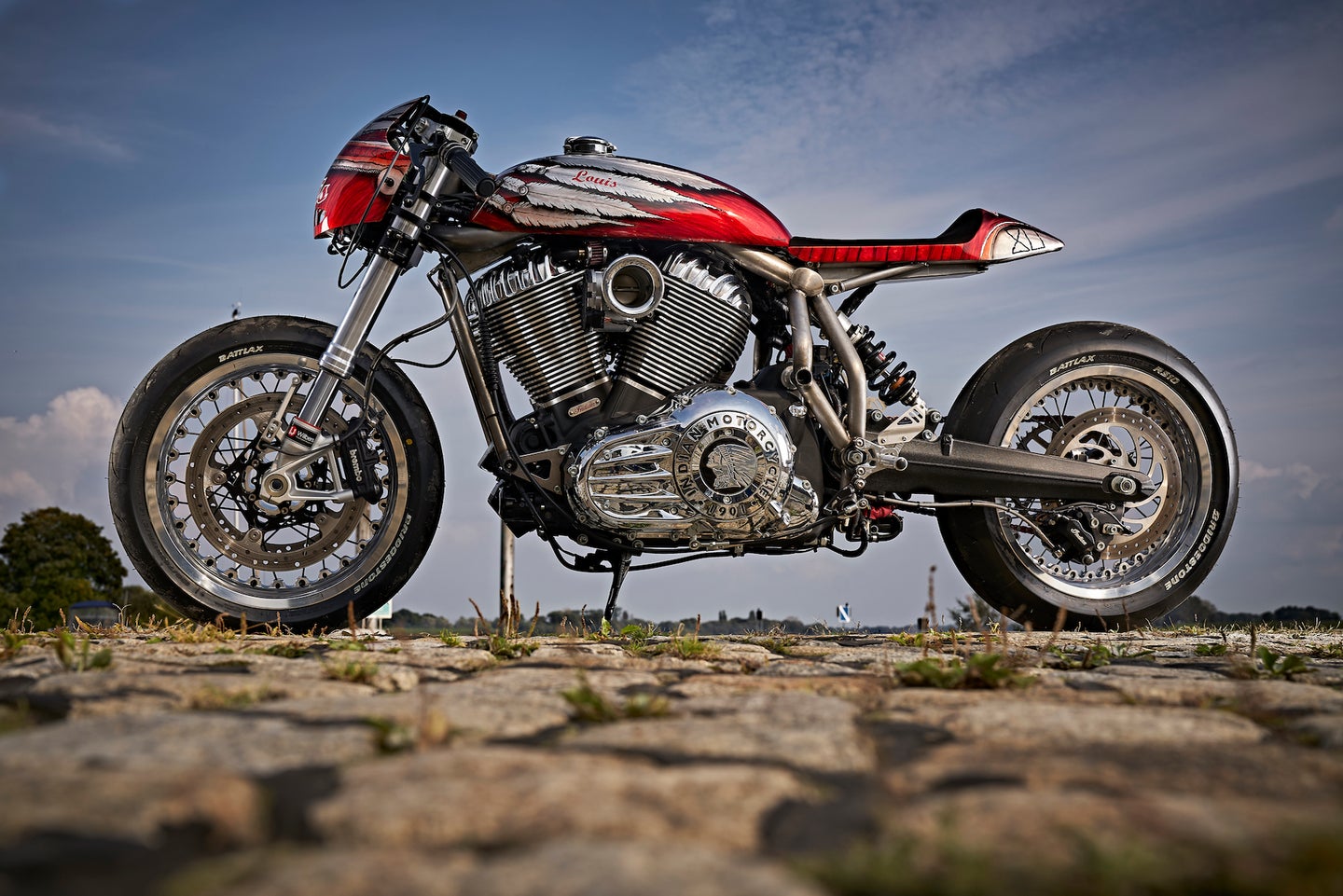 The only thing better than a manufacturer coming up with a really beautiful motorcycle is a custom builder getting its hands on one and making something totally unique. Detlev Louis Motorrad, one of Europe’s top motorcycle clothing and accessory brands, celebrated its 80th anniversary by building a custom Indian Chief Vintage cafe racer and calling it “Engina.”

"Last September, Europe’s market leader for motorcycle clothing and accessories, Detlev Louis Motorrad transformed an Indian Chief Vintage into the hot-blooded café racer, Engina, in celebration of the company’s anniversary," said an Indian Motorcycle representative in an email to The Drive. "Since then, the café racer has been crushing the competition at bike shows all over Europe, winning several awards along the way. The bike was designed by Louis’ gearhead crew comprised of world-renowned customizers, and has been meticulously crafted to harness the full power and performance of the Indian Chief Vintage."

Just about everything on Engina is completely different from a stock Chief Vintage. It has a custom tank, seat, and front cowl with a red and white paint job with feathers reminiscent of the Indian headdress logo. The name “Louis” is painted on the tank and the cowl as some light branding for Detlev Louis Motorrad.

While the Thunder Stroke engine looks only lightly modified from the outside, some pretty serious work was done to it so it could compete (and win) in sprint races. Engine specialist Ulf Penner outfitted the Thunder Stroke with hotter camshafts, a revised airflow system, upgraded heads, and new engine mapping. The result is almost 70 percent more power with all of that might going through an STParts header and a Shark silencer.

The bike is held together with a lightweight UNO frame with an upside-down front fork and a Wilbers rear shock. This frame really gives it that cafe racer aesthetic making it look completely different from a stock Indian Chief. Stopping power comes from Brembo brakes fitted to custom Kineo rims.

This is much more than just a cool looking build for Louis to show off. This thing is winning several sprint races and custom shows around the world. It won a podium place at the Custom Show Emirates in Abu Dhabi, snagged a trophy at the Custom Show in Dortmund, and it won Best Streetbike at the Berliner Motorrad Tage show in Berlin.

Could this be a hint that Indian Motorcycle is thinking about building a production cafe racer? It’s hard to say, but we sure hope so.