"Best in class" has always been a silly war of semantics. Here's how that war is waged. 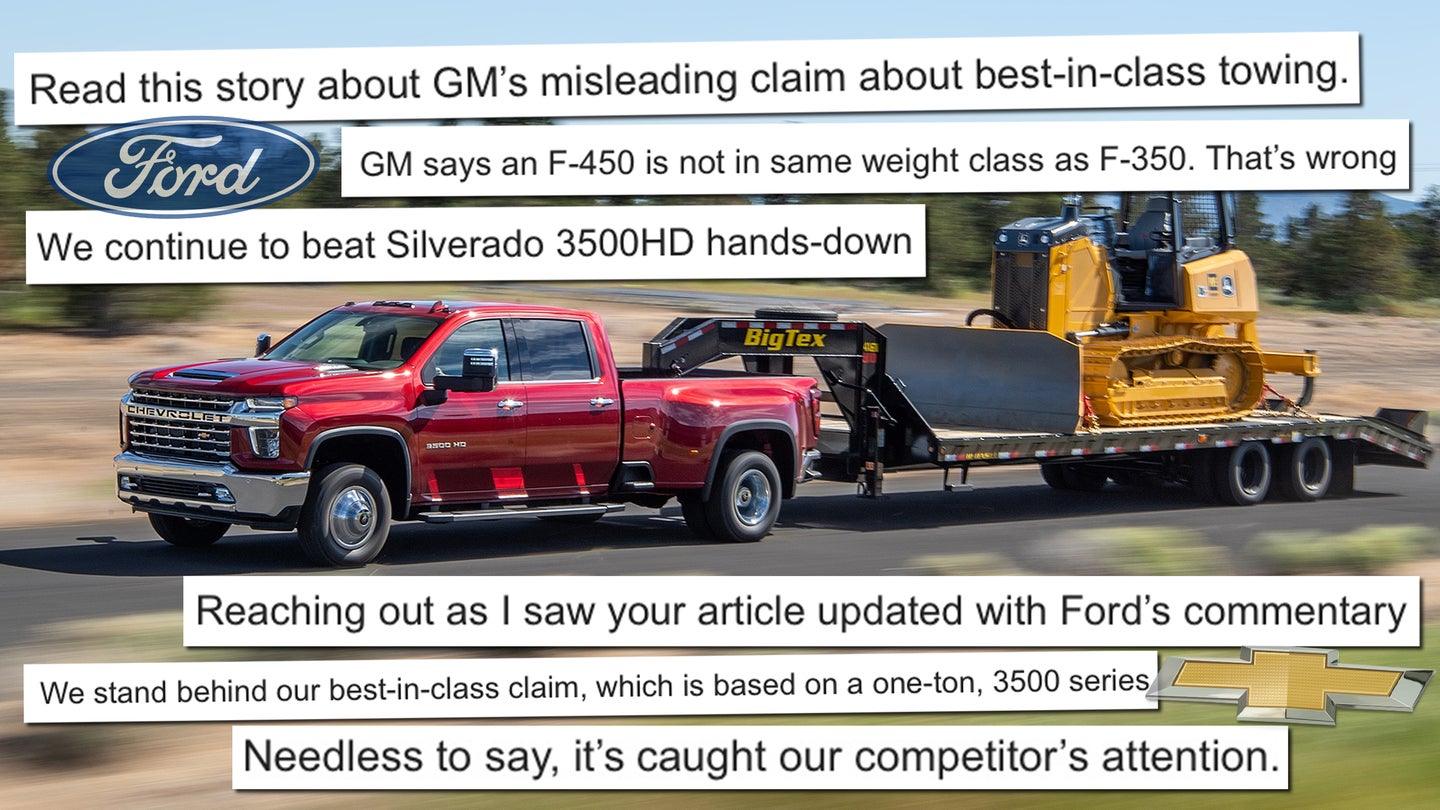 Some marketing terms should always be taken with a grain of salt, and perhaps the worst offender is "best in class." The problem is, which class? Fortunately for us, Ford and Chevy have been debating just that on the grand stage that is The Drive's email inbox.

Earlier this week, we covered the new 2021 Silverado 3500 HD's 36,000-pound maximum tow capacity. It's a modest increase of 500 lbs over last year's model, but enough for Chevrolet to stamp a "best in class" claim on it. Side note: That's enough to haul roughly 36 chunky pre-hibernation Alaskan bears, so we're super here for the upper level of this war of pickup stats.

We didn't dwell too much on that "best in class" claim because of the marketing-fluff nature of it, so we compared it to the meatiest iterations of its primary competitors in our piece: the Ram 3500 HD and Ford F-350 Super Duty. Sure enough, those pickups haul 35,100 lbs and 35,750 lbs, respectively.

Yet less than a day after we wrote about Chevy's shiny new towing figure (again, this was a press release issued to the entire industry), a Ford representative sent us an unsolicited email to say that Chevrolet's best-in-class claim is wrong—at least, according to the GVWR truck classifications used by the U.S. government.

GVWR stands for "Gross Vehicle Weight Ratings," which refers to the maximum weight the truck can handle, including that of the truck itself, its cargo and its passengers, but excluding trailers. If you've heard of Class 1, Class 2 (which is typically broken up into 2a and 2b based on an EPA threshold), Class 3, and so on—those are talking about different GVWR ranges. Jalopnik has a full rundown of what weights fall into what class here, if you're curious.

"GM says an F-450 is not in same weight class as F-350," the Ford spokesman wrote in an email to The Drive. "That’s wrong and misleading. We classify using government standards just like they do."

He's got a point. Technically, the Ford F-450—with a max tow capacity of 37,000 pounds—is a Class 3 truck, despite having the number 4 in its name. By the GVWR standard, it's in the same class as the Silverado 3500 HD. Since 37,000 is higher than 36,000, the Chevy isn't best in this class, at least by that standard. GM never said how it defined the "class" in its announcement, but we decided to update the article based on Ford's formal response:

"The Ford F-450 pickup and Silverado 3500HD pickup are both Class 3 trucks topping out at 14,000 pounds GVWR. We continue to beat Silverado 3500HD hands-down with max towing up to 37,000 pounds. We will continue providing this information to consumers shopping for the most capable truck, despite Silverado’s misleading claims, and will focus on delivering the best capability for truck owners instead of claims gamesmanship."

You'd think the 1, 2, 3, etc. at the front of the numbers roughly correspond to their GVWR class, but somehow the pickup version of the F-450 only has a GVWR of 14,000 lbs—falling just short of the Class 4 threshold. (The F-450 Chassis Cab is built a bit differently, though, and falls into Class 4.) The Ford rep further pointed out that many Chevrolet Silverado 2500 HD trims also falls into a different GVWR class than its number would suggest:

Why Ford would want to note that some of Chevrolet's Silverado 2500 HDs punch above the weight class implied by their name while its F-450 pickup falls just short beats me, but hey, we're just the folks getting these unsolicited emails.

Roughly an hour after the correction went live Thursday evening, solidly into most folks' off-time, a Chevrolet rep hopped into my inbox to take issue with Ford's rebuttal. According to her, GM was using the old-school payload classes—as in, "half-ton" (in the Silverado's case, the 1500), "three-quarter ton" (2500) and  "one ton" (3500)—not GVWR:

For background, we know customers cross-shop by tonnage ratings, not GVWR classes, so we compare apples-to-apples for clarity and transparency with our customers.

Furthermore, reputable automotive media (such as yourselves, along with TruckTrend and TFL Truck) always do head-to-head comparisons based on vehicle tonnage, which consistent with GM’s methodology, and so there is an even playing field on the features and capabilities being tested.  We’re unsure why Ford is straying from the industry-accepted classifications.

The bottom line is, GM’s pickups have gained considerable share this year and the Chevy Silverado HD has played a big role in that thanks to its capability. Needless to say, it’s caught our competitor’s attention."

Originally, "one ton" referred to the weight of a pickup's payload, which refers to the amount it can haul in its bed. Yet pickups have long since exceeded these capabilities, so much so that Jalopnik referred to the "half-ton"-style nomenclature as "archaic and misleading." Folks don't assume an F-150 will only haul half a ton in its bed anymore. They're going to skip right to the stat sheet for that info.

Still, the GM representative has a point in referring to payload classes, as that general division between models that roughly coincides with the first number in the name of the truck has stuck around. We even cross-referenced the Ram 3500 HD and Ford F-350 Super Duty in our article as yes, those are the usual comparos when pickup shopping.

Technically, both are right about having the best truck in a class, albeit using different, slightly overlapping classifications. Let's be honest, too: If I was in their shoes, I'd be vigorously combating the other manufacturer's truck stats with what my marque does better. It's their job, after all.

Moral of the story? Take every "best in class" claim with a grain of salt. Manufacturers need to be more specific about these "best in class" claims or else we're going to groan at them like we do whenever a new press release calls something "dynamic." A few more clarifying words could've spared our emails a proxy war of PR teams over the hotly contested King of the Tow Stats title.