The Definitive List of New Cars With AC Outlets

You think it’s a throwaway convenience—until you really need it. 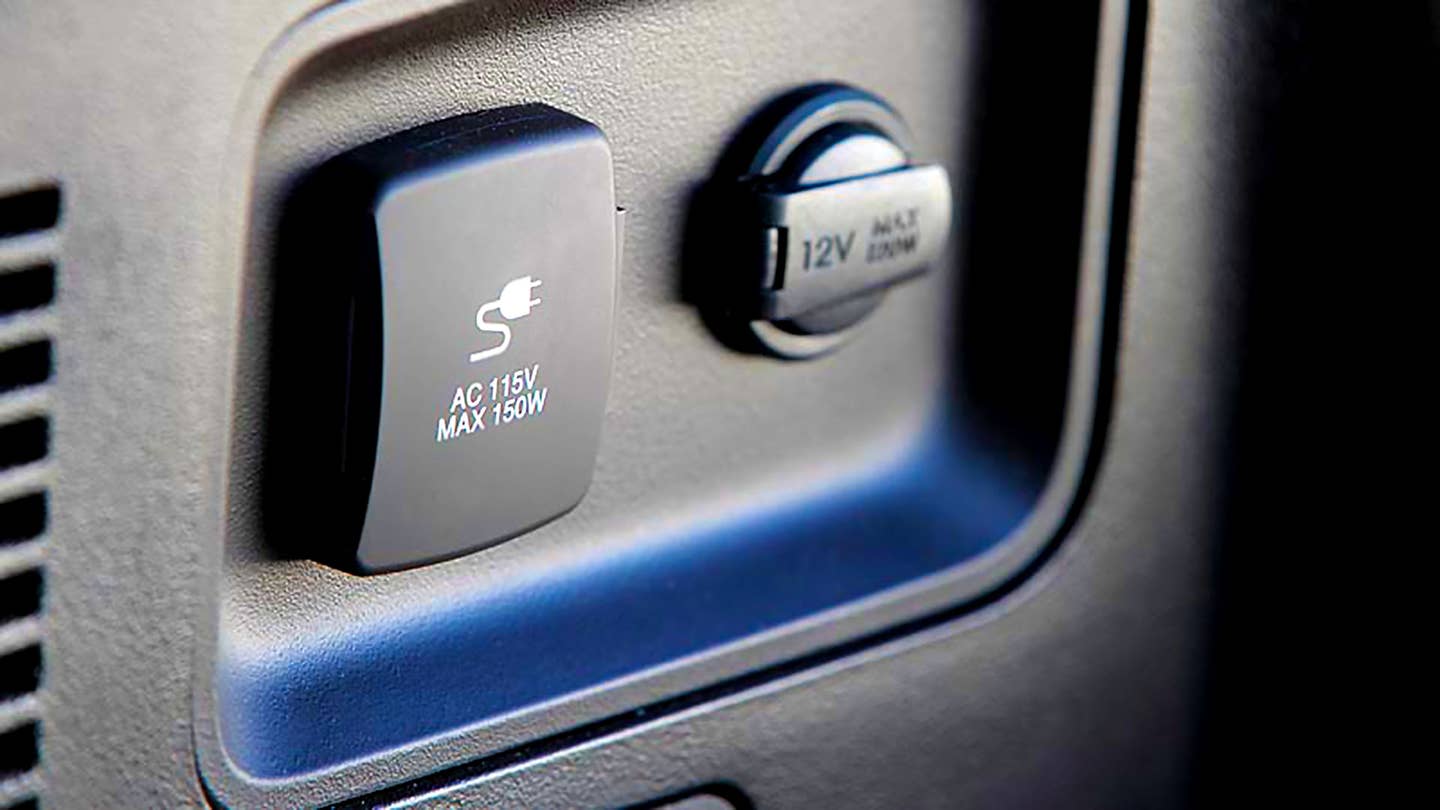 I’m no engineer, or historian, but it’s my understanding that electricity was harnessed by humans for household use at around the same time as the automobile began its path toward ubiquity—near the start of the Twentieth century. This means that for well over one hundred years, these twin signifiers of modern life—the car and the current—have existed on parallel developmental planes.

I recently spent a week in the new Cadillac CT6, the back seat of which came equipped with not only WiFi and an array of USB ports, but a bona fide 110 Volt outlet, the three-prong variety capable of accepting the kind of plug typically attached to one’s necessities: cappuccino maker, hair iron, vintage globe lamp, and laptop. Thus endowed, the gorgeous, Italian-esque leather back seat of this superlative cruiser acquired ability to act as a mobile office, and truly walk Executive Realness.

This made sense to my Manhattan luxury-livery brain, since this is just the kind of lengthy, fancy-pants vehicle in which a busy person like me might be chauffeured about, and in which I might need to plug in my computer, or quickly charge my phones, tablets, and supplemental batteries en route to the airport or a day of meetings. Yet in my experience, I’ve found that it's still a rarity to come across a high-end car that takes advantage of the wizardly alchemical means necessary to transform “car electricity” into “normal electricity.”

To test my theory, I performed a definitive investigation of American-market vehicles with AC outlets, contacting just about every manufacturer that sells a production vehicle here. As it turns out, my instincts were correct: The capacity seems reserved mainly for work trucks, party vans, and anything intended to schlep kids and their conjoined electronic devices. And there are good reasons for this.

“AC outlets were originally put in SUVs and minivans and crossovers so that kids could plug in their gaming consoles,” says AutoPacific industry analyst Dave Sullivan. “But the bigger use for them has turned out to be pickup trucks and vans. As lithium ion batteries have become more prevalent, and more capable in terms of being used by professionals in power tools, there’s more need for them to be able to be charged at a work site, and to give you the ability to charge between driving around to different jobs.”

This explains why brands like Nissan, Honda, Toyota, Dodge, Lexus, Infiniti, and Acura reserve these outlets solely for their people- and business-haulers, and almost everyone else clusters their plugs in these vehicle types. It’s where they find their ideal use case. Yet, as these types of vehicles proliferate and continue to broaden their appeal, it seems likely that consumer applications of in-car alternating current will follow suit. Trucks have always been bestsellers in the American marketplace, but crossovers now outsell sedans. And as Americans get used to an in-vehicle convenience, it tends to snowball throughout the market. Witness the spread of cup-holders, USB ports, and rear-screen entertainment.

Certain brands outside of this realm have an intrinsic image that lends itself to the proliferation of AC outlets. Jeep owners need plugs for compressors, jack hammers, and Jeep-branded boom boxes, so they’re perhaps the only marque to make AC outlets available across their entire range. Interestingly, Kia also gives their consumers credit for embracing the great outdoors, and perhaps a bit more electrically.

“Kia has found that owners use their vehicles more frequently for activities that can require an outlet, such as camping, tailgating, and outdoor activities,” says Steve Kosowski, the brand’s head of long-range product strategy. “They need power for lighting, music, and powering items such as a blender or pump for an air mattress.” A blender and an air mattress? Maybe I should be driving more Kias? Oddly enough, Subaru doesn’t offer a single plug in any of their cars, stranding their own active lifestyle consumers in making frozen acai margaritas and sorel smoothies with a shitty USB-powered mixer.

The rest of the general car market offers slim pickings for pluggings. Chevrolet and Buick each have two. Ford, Hyundai, and Chrysler each have one, as does VW. But in the luxury car segment, there’s almost bubkes. Mercedes is the only of the Germans triad to offer an outlet in a car, and the Italians and the Brits are entirely lacking. Lincoln will offer one on the Continental, if a tarted-up Fusion can really be considered a luxury car. Indeed, it's Cadillac that leads the luxe-plug pack with three automotive offerings.

This limited supply is based mainly in the fact that imported luxury cars tend to be global vehicles, and customization is expensive. “These high-end vehicles are sold internationally where there are different voltage requirements and different plugs, so it becomes difficult to meet all of those standards,” Sullivan says, noting that a DC-to-AC inverter is not a cheap component to engineer or integrate into a car’s limited real estate. “If you’re building just for the American market it’s easier, but most luxury vehicles are sold in so many countries, and often in such low volumes, that you can’t really do it.”

Even at the loftiest heights of the market, this electrical transmutation seems difficult. Rolls didn’t respond to my request to bespoke an onboard outlet for my Osterizer, but when I asked if the Flying-B brand would be willing to customize a Mulsanne thusly, spokesperson Erin Bronner, answered right away. “In theory all one-off requests go to our Mulliner bespoke division for consideration,” she said. “Often when we receive requests multiple times, that’s how our offerings grow as cost options. To my knowledge, we haven’t received this one yet. We have 12-volt outlets and USBs, but not household.”

In the meantime, leaps are being made in wireless charging for smaller devices. Sullivan says that Qualcomm jut announced a big advancement in speed, though he notes that even the fastest current wireless systems are still inadequate. “For example, if you’re using Waze and you’re charging your phone, it’s barely holding steady,” he says. His prediction is that the real differentiator will arrive in the broader adoption of the new USB-C standard.

“That will be strong enough to charge a laptop battery,” he says. He’s less certain about it’s ability to run a blender. “I’m not sure about that. Maybe?”

Of course, this means we’ll all have to adapt. “All of the manufacturers have finally agreed on the current USB standard. So if they change, you’ll have to get another cord.”

The Definitive List of U.S. Vehicles in which an AC Outlet is Available