Add Coronavirus to the List of Problems for Auto Shows

Also in Speed Lines: Harley’s CEO is out while Mercedes’ new boss braces for a bumpy road ahead. 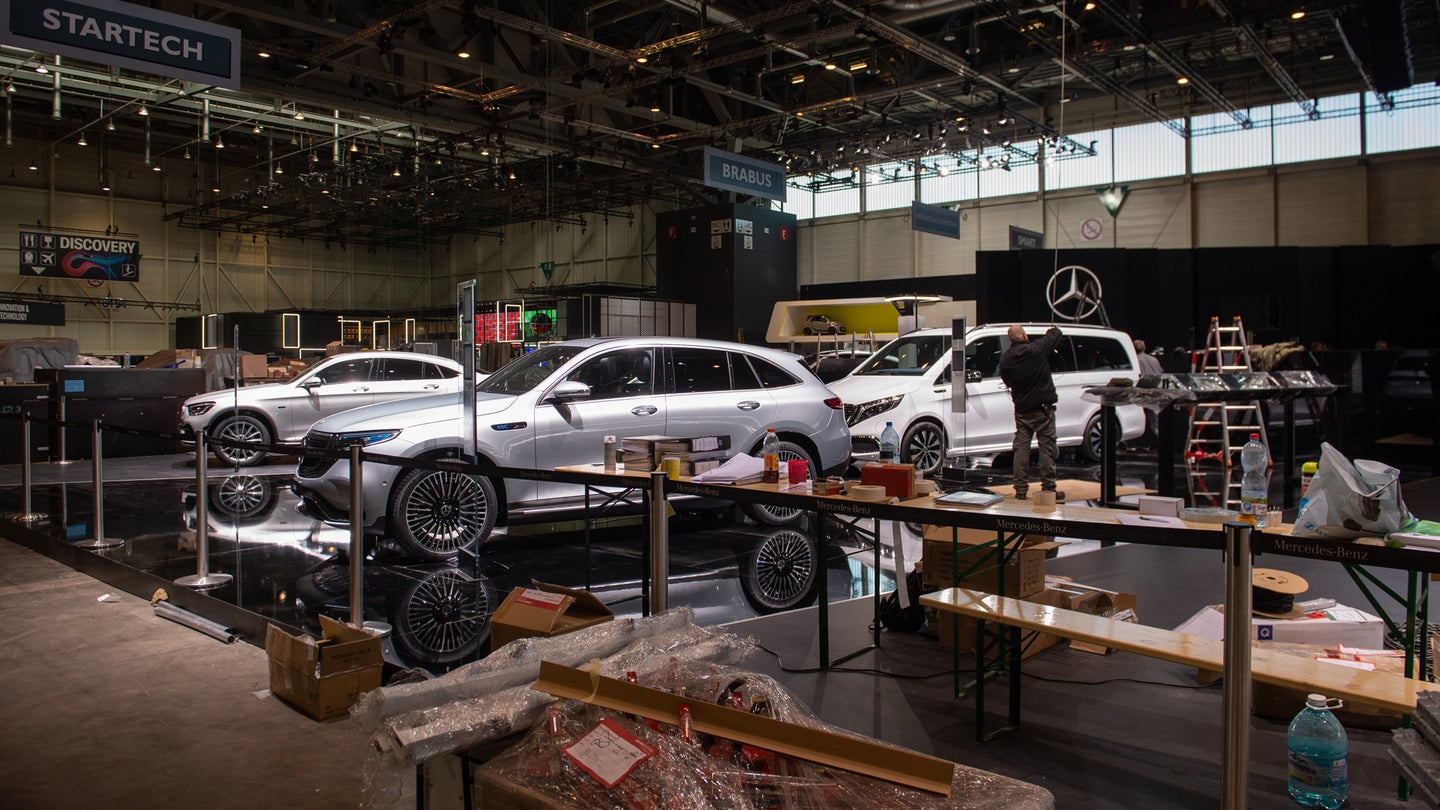 Welcome back to another edition of Speed Lines, The Drive's morning news roundup of what's important in cars, tech, and transportation. Today we're talking about the fallout from the coronavirus (again) and the headaches facing Mercedes-Benz's new CEO.

Coronavirus Is Bad News For Car Shows, Too

Indulge me as I put on my Old Man Hat for a second: one big thing that's changed in the decade or so I've been covering the auto industry has been the role of the auto show. Back when I was coming up, auto shows were a huge deal; all-hands-on-deck affairs that meant two or three days of hard news grinding, networking, and hors d'oeuvre-binging.

We often wore suits and ties, for some reason. I suppose we wanted to look nice for the cars.

But over the past few years, the importance of the auto show from a news perspective has greatly diminished. Citing rising event costs, an unwillingness to share the stage with competitors, a greater focus on standalone events and the ability to put news online instead, automakers are now significantly more selective about which auto shows they attend. Some have dropped them almost entirely. Auto shows are still fun and useful for civilians like you because you get to see a bunch of new cars in one place. For the news business, not so much.

So as we firmly enter the age of the auto show's decline, you can add one more factor to that: viral outbreaks. With the Geneva Motor Show officially canceled—not even postponed—thanks to the coronavirus, here's Automotive News on how this kind of thing is a blow the auto show doesn't need, emphasis mine:

Some automakers in recent years have been retreating from the expense and fuss of major auto shows from Detroit to Tokyo, events where attendance once was viewed as required for competitors showing off their latest achievements.

Even before the plug was pulled late last week, Geneva, Europe's leading annual car show, was already down on participants based on decisions by Ford, Jaguar Land Rover and Nissan to skip what would have been its 90th year.

An official with one large brand, who asked not to be identified, told Automotive News Europe that it spent approximately $6.6 million on its stand at Geneva, most of which was already built by the time the cancellation came.

I won't go so far as to say coronavirus is a "nail" in the auto show's coffin. But I do see a future where automakers look at this situation and increasingly decide these shows just aren't worth it.

Harley's CEO Is Out

If you've followed Harley-Davidson's troubles over the years—declining sales, an aging core buyer base, problems with tariffs, the same struggles with "mobility" that the car companies face—then this news shouldn't come as much of a surprise. CEO Matthew Levatch, who's been running the show since 2015, is out.

Here's Reuters on the situation:

Harley has failed for years to increase sales in the United States, its top market, which accounts for more than half of its motorcycles sold. As its tattooed, baby-boomer consumer base ages, the Milwaukee-based company is finding it challenging to attract new customers.

Levatich, who took the company’s reins in May 2015, bet on new launches, including of battery-powered bikes, to turn around the company’s fortunes in the domestic market.

The results, however, remained elusive.

Harley’s 2019 U.S. bike sales were the lowest in at least 16 years. Falling sales in the past 12 quarters have forced the company to limit production of its bikes to prevent price discount pressure and protect profit.

In 2019, Harley’s bike shipment volume in the United States was the lowest in at least two decades. Global shipments were the lowest since 2010.

I don't ride so I can't speak to this personally, but I do like the LiveWire quite a bit. But I think it's clear that one expensive, range-limited EV bike alone isn't going to carry this storied brand into the future.

We talk about the pivot to electrification a lot here on Speed Lines, and it increasingly feels like the ones leading the charge—that pun may or may not be intentional, I can't decide—are the German automakers. The Volkswagen Group in particular. This is largely due to two things: tighter emissions standards in key markets like Europe and China, and VW's costly diesel cheating scandal. But every automaker got wrapped up in that mess to one degree or another, so they're all having to go heavy on EVs.

At Mercedes-Benz, new Daimler CEO Ola Källenius' focus has largely been on cutting costs so that a shift to EVs can even happen in the first place. Things on the chopping block include jobs, car plants, a joint ride-sharing venture with BMW, downsizing the entire combustion-engine fleet, and more.

Plus, as Automotive News notes, the launch of the electric Mercedes EQC crossover—a car regarded by many reviewers as "fine but not revolutionary"—has not gone spectacularly well:

Källenius' first major project when he was development chief, the Mercedes EQC electric crossover, has been marred by production troubles.

After blaming the difficulties on a lower-tier supplier that failed to deliver components to specification, Källenius said the issue was resolved after vehicles were retrofitted with new parts.

But only 623 have been registered in Germany since the launch last spring, compared with 828 Jaguar I-Paces and 3,110 Audi e-trons over the same 10 months.

"They've gone nowhere so far when it comes to electromobility," said Stefan Bratzel, director of the Center of Automotive Management at the University of Applied Sciences in Bergisch Gladbach. "And that is a massive problem."

It's one Källenius is well aware of — and one he has pledged to fix: "This company is going to change fundamentally," he said.

Can Källenius become the turnaround artist the automaker needs? He has his work cut out for him.

In an era of tight new-car margins, retailers dream up ways to free up cash (Automotive News)

What to Do If You Think You Have COVID-19 (Lifehacker)

Where Is Jack Dorsey? Not in the Room as His Twitter Future Debated (Bloomberg)

Congratulations! You are the new CEO of Harley-Davidson. It's my call, and I'm putting you in charge. You have no say in the matter. So what do you do now that you're the boss?

The Chinese automaker has settled on a new approach to sell its latest SUV: Fear.