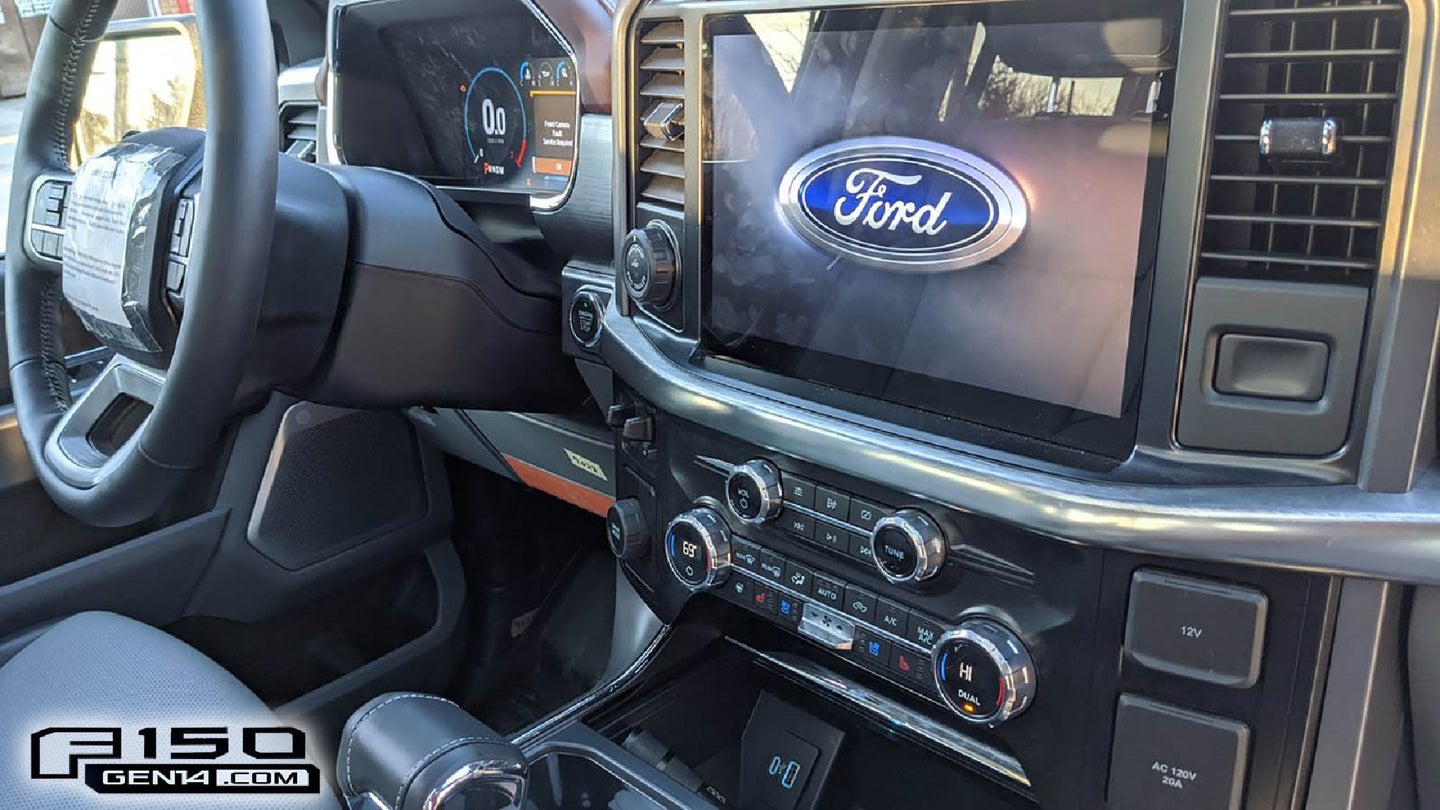 By now, you know the Ford F-150 has been the United States' best-selling pickup for decades—43 years running, to be exact. That's not to say it can't benefit from improvements, though, especially in departments like the interior where its rivals at Ram currently have the upper hand. This is an issue that'll be addressed with the 2021 Ford, which we've seen in camouflaged guise a time or two already. At last, if these spy photos of a supposed next-gen F-150 Lariat's cabin are anything to go off of, the future looks bright.

These images were originally uploaded to the F150Gen14 forum, along with some key components to point out. The most eye-catching detail is the infotainment screen, suspected to run an updated version of the Blue Oval's Sync system. In comparison to the outgoing model, the entire center stack is flatter, giving off a sleek look that matches the refinement these $60K pickups promise. The display is also larger, though not inconveniently so, promising a clearer view of the on-screen commands.

Physical stereo buttons can still be found underneath the screen, near the HVAC controls. There, it's a familiar button/dial combo to toggle the heater, air conditioning, aerated seats, and heated steering wheel.

The seats are only pictured in one photo, revealing a two-tone leather scheme.

The original poster notes that the 2021 F-150's interior features a stowaway shifter, though it's unclear exactly how this feature might work. There looks to be a button on the stalk which could theoretically collapse the shifter, helping it to sit flush with the rest of the console area.

Interestingly, to the bottom left of the screen, a rotator labeled "Drive Mode" is mounted to the dash. In previous models, users had to maneuver through several different screens to change between Normal, Tow/Haul, Snow/Winter, Eco, and Sport. This would cut out unnecessary steps and streamline the process significantly.

Another highlight is the fully digital instrument cluster, which is expected to be standard equipment on Lariat-trimmed trucks and up. There's the familiar speedometer and rev-counter, along with trip meters, temperature readouts, and, of course, the fuel gauge. Though these photos show the display in only one position, it can surely show customized parameters and control various vehicle functions.

The steering wheel is noticeably modernized as well. It's an oval, three-spoke design with plenty of buttons to keep drivers' hands at 10 and 2, and their eyes on the road. All in all, it's more evolutionary than revolutionary, though the update is still welcomed.

Like any contemporary vehicle at this price level, there's a bevy of charging outlets within easy reach of the driver and front passenger. Two USB plug-ins, a 12-volt, and an uprated 120-volt AC outlet are all mounted front and center.

Notably, there's no visible four-wheel-drive knob in these photos, though it's possible it could've been moved to the other side of the steering wheel for 2021.

Given the current state of the auto manufacturing world, it's hard to say when the next-gen F-150 will be revealed, let alone hit the road. When it does, expect it to pack an array of powertrain options including the usual V8, EcoBoost V6s and light-duty Power Stroke diesel. An all-new hybrid will also join the fray, supposedly incorporating an electric motor paired with a 3.5-liter, twin-turbocharged V6.

Kids Won’t Leave You Alone? Have Them Color These Ford F-150 Raptors and Mustangs