My sim racing career didn't take off the way I had hoped. But it did make me a better racer. 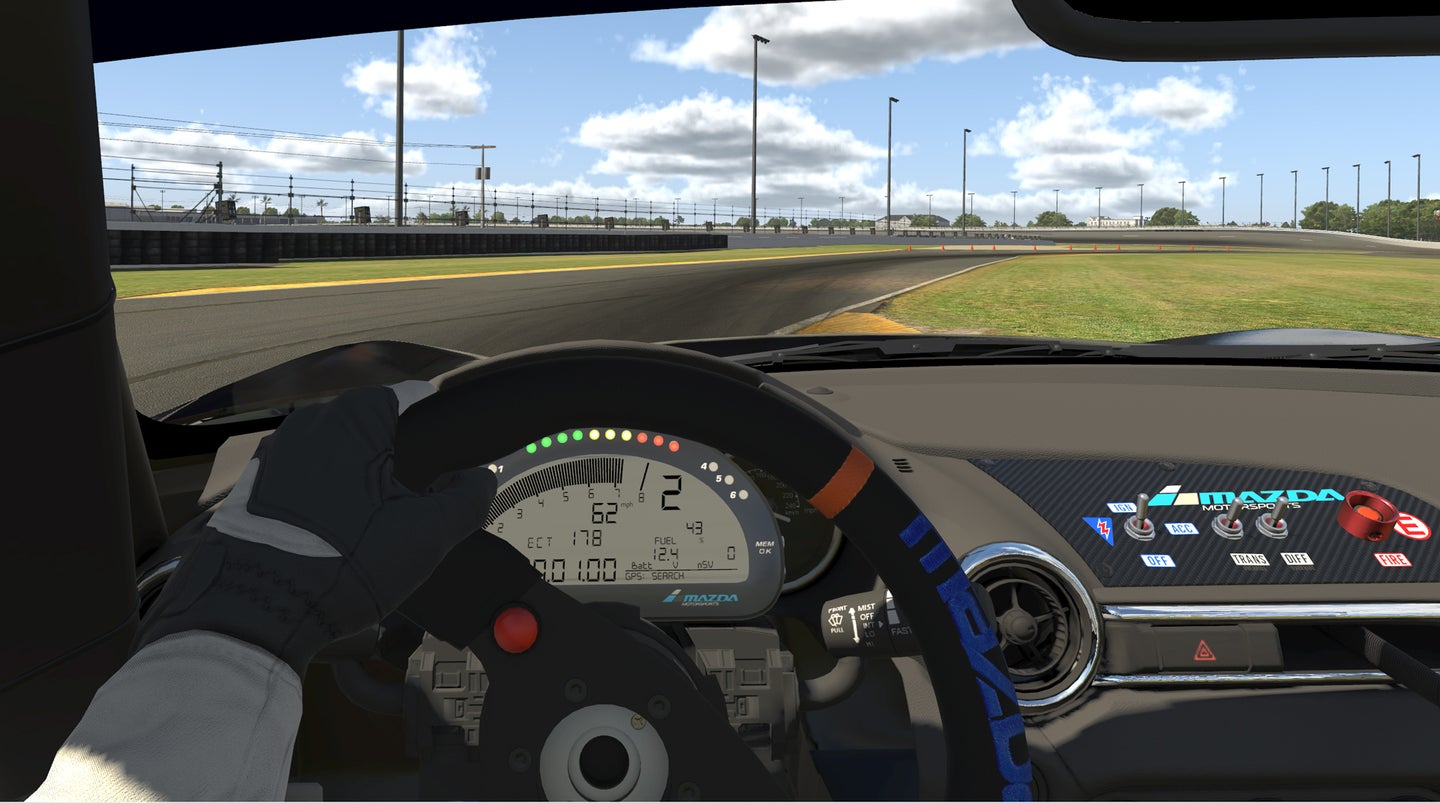 A few months ago—a few years ago, if we’re going by 2020 Time—I dove into the sim racing world headfirst. With real-world racing on hold at the time thanks to the coronavirus pandemic, I decided to do what many others in the world of speed were doing and built my own computer to dive headfirst into iRacing. I was fully committed to this plan. And then my phone rang.

On the other end was Alex Nelsen, team principal of NRG Motorsports, wanting to know if I’d be interested in driving for them in the World Racing League 14-hour endurance race at Daytona. And just like, that my dreams of global sim racing domination were put on hold.

OK, to be honest, that wasn't the only reason my plan for Sim Racing Glory was put on the back burner. It turns out that the top sim racers are really good. I mean really, really good.

My thoughts, when I jumped into the virtual world,  was that my almost 20 years of real-world motorsports experience would put me near the top of the leaderboard straight from the start. And cementing my fantasy was the fact I was able to progress up from a rookie license in a few short races.

But that's when reality jumped up and smacked me in the face.

Shortly after I moved up from my rookie license way back in March, I competed in the Roush Performance All-Star Race, held at iRacing’s hyper-accurate recreation of Road America. And Road America is a circuit close to my heart. Back in 2006, I got my first professional racing podium by holding off Randy Pobst for nearly 30 minutes. I also set the second-fastest race lap of that weekend. So my thinking was that jumping into the Virtual Road America should be a snap, and I'd be spraying virtual champagne by the end of the race.

Reader, this turned out to be false. Standing in my way of the aforementioned Sim Racing Glory was a bevy of Roush's top drivers. Guys like NASCAR drivers Greg Biffle and Trevor Bayne, and road racers such as Ford factory drivers Billy Johnson, Joey Atterbury, Jack Roush Jr., and Guy Cosmo. I’ve gone head to head with some of these guys in the real world, and thought I’d be able to hold my own here too. But what I wasn’t counting on was the sim racing ringers that also double as real-world drivers.

After qualifying P3 for the race behind NASCAR’s Austin Cindric and IMSA/SRO champion Kyle Marcelli, I managed to get up into P2 at the start and was already imagining how the podium would feel, but Austin had other ideas. Lap after lap Austin kept putting time on me and slowly but very surely he disappeared up the road never to be seen again.

I’m used to being within a second of any other pros in the field. But in this race, Austin was pulling away by over two seconds a lap. And that, my friends, is the annoying thing about virtual racing. There are some people who are just dialed into racing that way. Those guys are affectionately called “Aliens," and boy howdy, are they fast.

In talking to several of my real-world professional counterparts, they've all made the same comments on the main struggle that real-world drivers face jumping into sim racing. There is a way that you drive a car in the virtual world that doesn't quite equate to how you’d drive a car in the real world. There are things that I will do in the real world that would cost me a massive amount of lap time in sim racing.

For example, iRacing always favors the shortest path through a corner. While that is also true in the real world, this issue is that iRacing prioritizes it to a degree that you wouldn’t normally see, saving you tenths of a second instead of hundredths.

The way I look at it is that the simulation is programmed with an optimal, theoretical lap time that any individual car can do. It takes into account things like the line you drive through a corner, level of grip, the weight of the car, aerodynamics and so on. It adds all these factors together and calculates the best possible lap time that combination can achieve. The closer you get all of those factors to their respective optimums, the faster your lap will be.

To a degree, that's kind of how it works in the real world as well. However, that being said, things in the real world are a bit more organic, allowing for a more seat-of-your-pants style of driving than mathematical perfection. There are also numerous other infinitesimally small factors that all add up to go in quickly in the real world that just aren't replicated in the virtual world. That's not to say that sims don't do an amazing job of replicating what real life is in a race car but just that there is that last couple of percent of realism that they haven’t quite achieved yet.

To put that theory to the test, I accepted the offer from NRG to race their Toyota 86 at Daytona International Speedway. My only problem was the last time I was actually in a car at Daytona was over 15 years ago, and the car I was driving I had four times the horsepower that the Toyota has and substantially better aerodynamics.

As the pro driver in the car, a large part of my job is to get our two paying drivers comfortable in the car. To that end, we try to allocate most of the practice day sessions to allow those drivers to get up to speed. But because I hadn't been to Daytona in so long, figuring all of that out in such a short time and managing to stay on pace would be a real challenge.

That's where the sim comes in.

IRacing does an amazing job of laser-scanning all of the tracks in their simulation. It's so good that I can pick up subtle variations in the track or cracks in the road surface that I can use as reference points for my braking or apexes. Unfortunately what iRacing doesn't have is a virtual version of the exact car I was driving, the Toyota 86. However, the Mazda MX-5 Cup Car, that iRacing does have a version of, runs very similar lap times to the Toyota in the real world and isn't so far off in weight and power. I used the Mazda to help me get my virtual bearings.

Thank God I did that. My first four laps on track I stuck it into the tire barrier three times. Twice in my first lap. Not the most encouraging start but I was really glad I was crashing 1s and 0s and not actual racecars. As I started to put in some serious laps I got more comfortable with the car and my memory of the track started to come back. The Mazda isn't the easiest iRacing car to drive, either. It does some very twitchy things at the limit which makes it quite difficult to master.

The week before the race I put in about an hour or two every day and as the sessions started to pile up, my lap times dropped accordingly. When I started my training I could barely get the car below a 2:20 but as time went on I was able to get down into the low 2:11 range. Now that time is still two seconds off the “Aliens,” but super competitive considering my sim racing experience. (Or lack of it.)

As fortune would have it, when I checked in at Daytona I found my co-driver's travel had been delayed so that meant I was able to get the first few sessions in the car and take my time to get up to speed. But it turns out I didn't need a whole bunch of time after all as my training on iRacing gave me a huge head start.

Many of the reference points that the iRacing engineers had scanned on the track were still there in real life, meaning I could get up to speed substantially faster and with way more confidence. Enough confidence, in fact, that I was able to convert my virtual track knowledge into pole position in class by .2 of a second. Not too bad for an old guy 15 years removed from his last time at this track.

I really wanted to do a virtual/real onboard lap comparison, but the different car and the different tires (street tires vs. racing slicks in iRacing) made that idea kind of worthless. However, global pandemic permitting, I do have some potential opportunities later on in the year to run cars and tracks that do have an exact counterpart in iRacing. So as soon as I get back on track with one of them, I will make sure to post some in-car video. To be honest I am as curious as you probably are to see how close things shake out between the real car and the virtual one.

But for now, I can honestly say that simulations have gotten so good that it is a hugely valuable tool for any driver, professional or otherwise, to learn new cars and tracks or just to keep mentally sharp for your next track day while stuck at home waiting for the world to reopen. I may not be destined for the top of the podium in the virtual world like I thought I’d be, but I have a powerful weapon in my arsenal now to get even better at doing this in real life.