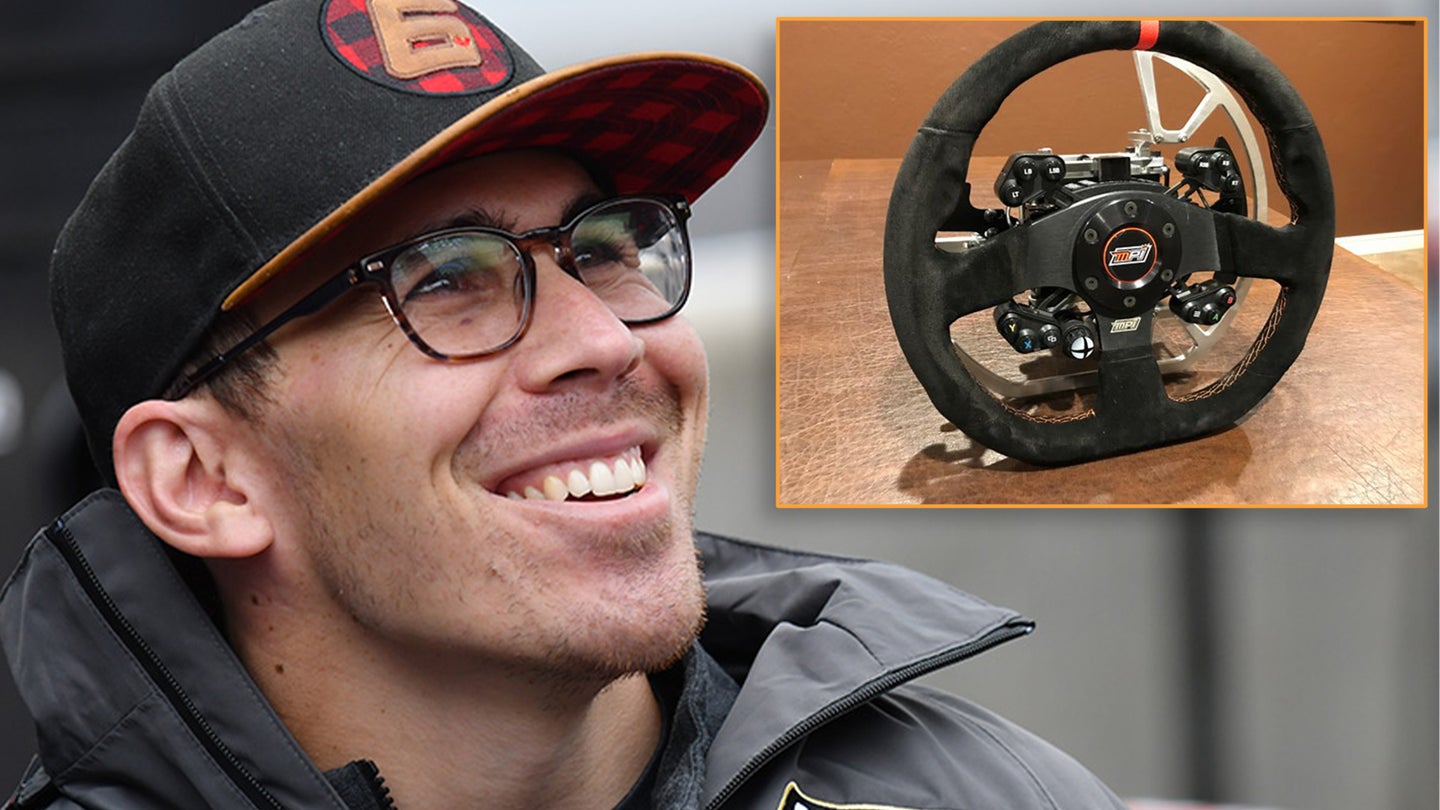 Pro driver Robert Wickens has managed a miraculous recovery since suffering a massive IndyCar crash at Pocono in 2018. The incident, which sent him and his Honda-powered racer tearing through the catch fence, left Wickens temporarily paralyzed from the waist down. Now, however, he's regained enough use of his legs to walk with assistance—a major sign of progress considering where he was not even 18 months ago. Still, a custom rig was in order to allow the Canadian his return to sim racing, and the solution is spectacular.

Wickens' bespoke steering wheel was built by IndyCar and sportscar racing veteran Max Papis, who owns a company called MPI Innovations that focuses on motorsports-grade driving equipment. Rather than competing with a normal setup including foot pedals for the brake and accelerator, the speedy 31-year-old can control the virtual car completely with his hands. This is thanks to a telescoping throttle lever mounted behind the wheel, along with a brake lever that's pressure-sensitive.

All in all, it's an exceptionally precise piece of equipment—as it should be, considering he'll be pitted against some of the series' best racers, young and old, during the IndyCar iRacing Challenge.

The trick piece of kit was slated to arrive in time for Wickens to take part in Saturday's IndyCar iRacing Challenge kickoff at Watkins Glen, though logistics issues prevented that from happening. Still, he has intentions of driving at the next round on April 2, set to be hosted at a virtual version of Barber Motorsports Park.

As for the rest of Wickens' sim racing setup, it looks like he's running a Sim Xperience force feedback rig. This comes into play when driving over bumps and apexes on-track, helping him to feel and adjust to the circuit as needed. Since there are no real G forces, equipment like this can help recreate the driving experience, aiding in some of the most precise calculations when it comes to driving lines and the like.

There's no doubt that Wickens has the pace to compete with IndyCar's top runners. Throughout 2018, his rookie year in the premier American open-wheel series, he wowed crowds and his competitors with how quickly he adapted to a new form of motorsport. He even nabbed pole position at his debut race, the St. Petersburg Grand Prix, and would go on to contest for wins until his horrific crash at Pocono. Still yet, he hasn't let that stop him from working toward a racing return.