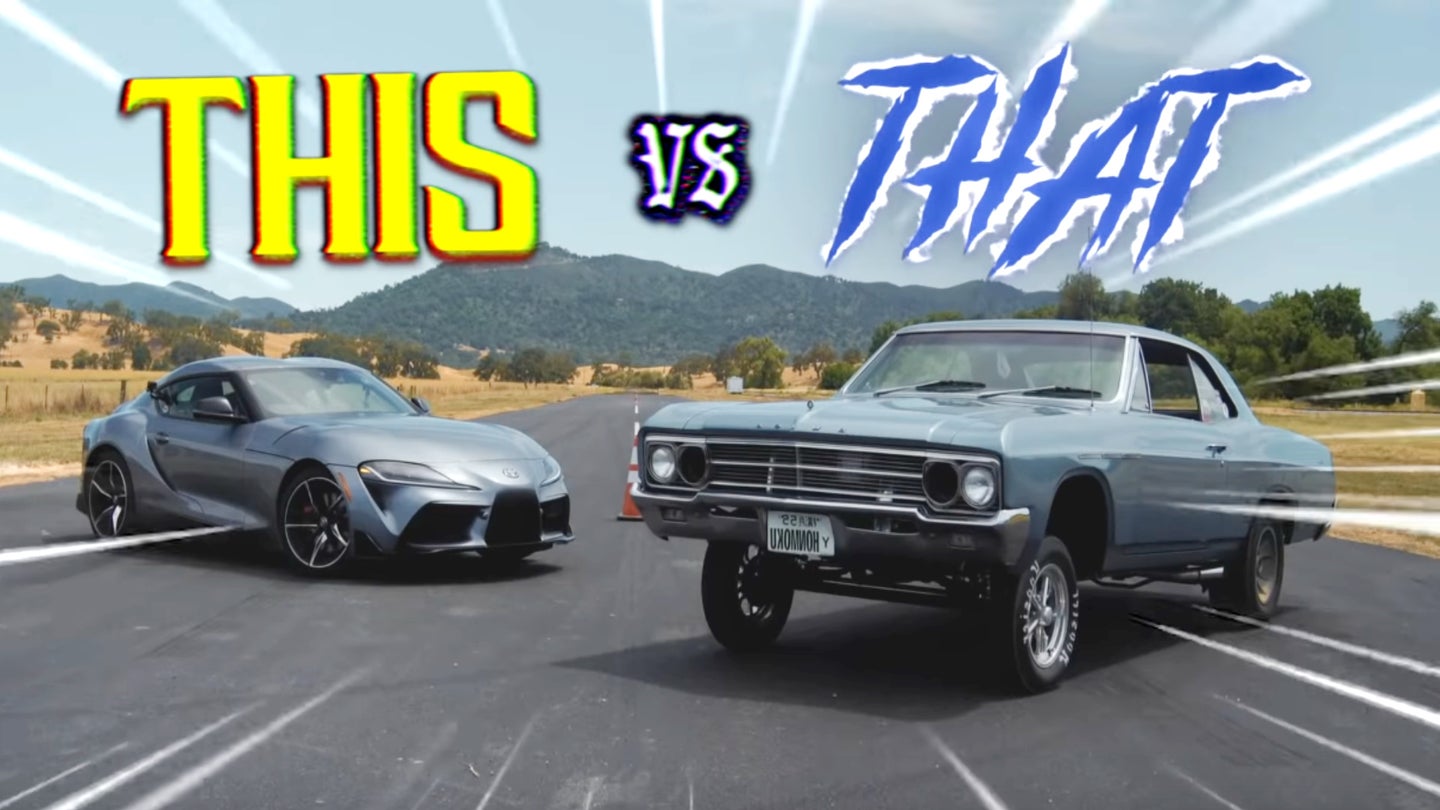 On its surface, this is a simple race between old and new. Vape pen versus hand-rolled cigarette. Power drill versus hammer. Hendrix against Skrillex. The point of Hoonigan's new This vs. That drag racing YouTube series is to entertain with seemingly-mismatched cars going at it in the quarter mile, but this inaugural contest between a tuned 2020 Toyota Supra and a jacked-up 1966 Buick Skylark gasser hot rod is a lot closer than you might expect.

Drag racing videos are staples of the car enthusiast internet, so I'm not going to pretend like you haven't seen something like this before. Especially since the new import vs old American muscle concept is familiar to anyone who remembers the Charger vs Supra race from 2001's The Fast and the Furious. Still, you have to admit that Hoonigan's got a good approach here for a fun shootout: The rules are loose, the surface is not prepped and the cars are fast.

Both cars are rear-wheel drive putting down around 400 horsepower. The Buick is rocking a four-speed M21 manual transmission against the Supra's high-tech eight-speed automatic. Under the Skylark's hood is a 150 shot of nitrous, and the Toyota's (BMW) engine has been tuned well past factory spec.

The main difference comes down to weight, and the Supra has nearly 200 pounds over "grandma's" 54-year-old Buick hardtop coupe. The Toyota weighs 3,400 pounds compared to just 3,260 pounds for the gasser. Surprised?

The nearly ten-minute video offers plenty of Hoonigan shenanigans if that's your thing, but we've cued it into about halfway through to get straight into the action. The crew is split on predicting a winner—without spoiling the result, I'll say that you might be able to guess it based on looks alone, though like the spec sheet suggests, it's pretty damn close.

Also, one of the biggest factors in this kind of casual racing format is going to be the person behind the wheel. Reaction times matter just as much as who's got more power and grip. But we're talking about a silly YouTube video here. The results are not being used for science or real bragging rights, so if you want to draw out some deeper meaning, you're kind of missing the point: To while away ten minutes with some tire smoke and loud noises.

Hoonigan plans to keep this going with more weirdo matchups. We'll be watching, because we could all use a little more mindless fun like this.