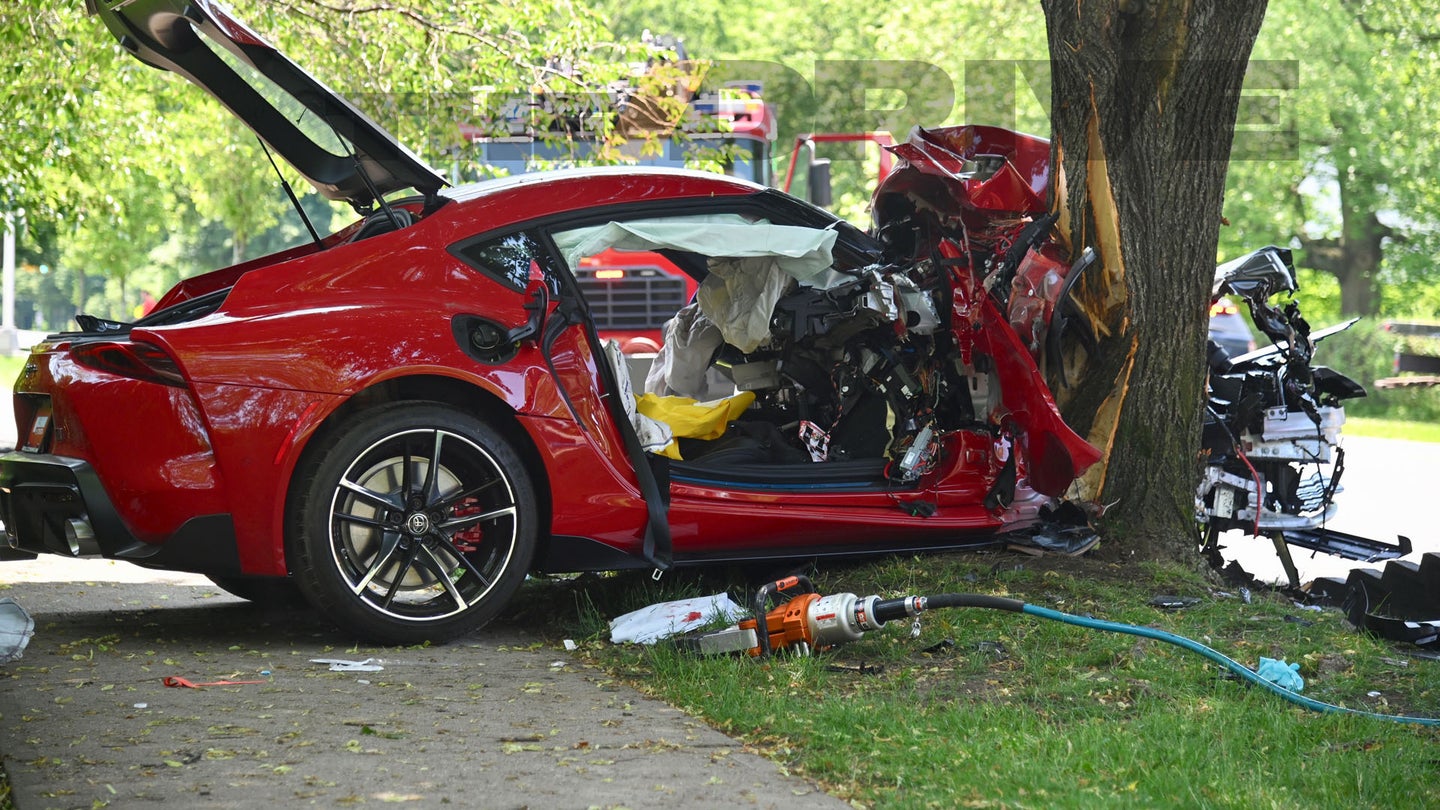 The test drive is one of the few, if not the only, enjoyable steps of buying a new car. After spending hours looking at pictures and watching YouTube videos about your next potential ride, you finally get to sit behind the wheel and hit the road for a few minutes. A brief stint to decide if the experience is worth a five-, six-, or maybe even seven-year loan, per se. Sometimes things go haywire, however, and as a result, the world is down a sports car after a test drive in Long Island, New York resulted in a brand new Toyota Supra being totaled.

The accident occurred last week on a straight stretch of Cathedral Avenue in Garden City, New York—roughly one mile away from Millennium Toyota. A dealership plate holder and vanity tag can be seen on the back of the car in photos provided to The Drive.

According to reports, two individuals took the Supra on a test drive around noon on June 9. Shortly thereafter, the driver lost control of the 335-horsepower sports car traveling northbound and struck a tree, sending suspension components flying more than 100 feet away from the site of the crash.

When questioned about the event, Millennium Toyota's general manager confirmed to The Drive that an accident involving a red Toyota Supra did occur on June 9. However, he declined to comment further on the crash out of respect for the individuals involved. It's unclear if either of the persons worked for the dealership.

The manager did note that the two individuals involved in the accident were "fine" and mentioned that there were no lost appendages.

In a separate statement, the Garden City Fire Department indicated that the passenger of the vehicle was trapped and required extrication via multiple tools. The passenger was then transported from the scene to a local hospital with "serious leg injuries."

Meanwhile, Facebook comments from locals criticized Garden City's infrastructure as being in poor condition. Some say it could've even played a role in the crash.

"I know that road like the back of my hand," reads a Facebook comment criticizing the condition of the stretch of road that the accident occurred on. "That road should never be used to test drive anything but an off-road truck."

What's surprising is that the dealership even let the Supra go out for a test drive. Many Toyota dealers flat-out refuse test drives for the $60,000 sports cars, and those that do permit them are often chauffeuring potential buyers in the passenger seat. It's unclear if this particular dealership's policies are different, or if the individuals involved in the accident are strictly dealership employees.

One thing is for certain: this was an expensive mistake.