We Entered an Old Subaru In a Rally For Math Nerds

TSD rallies are challenging and fun—if you can figure out the rules. 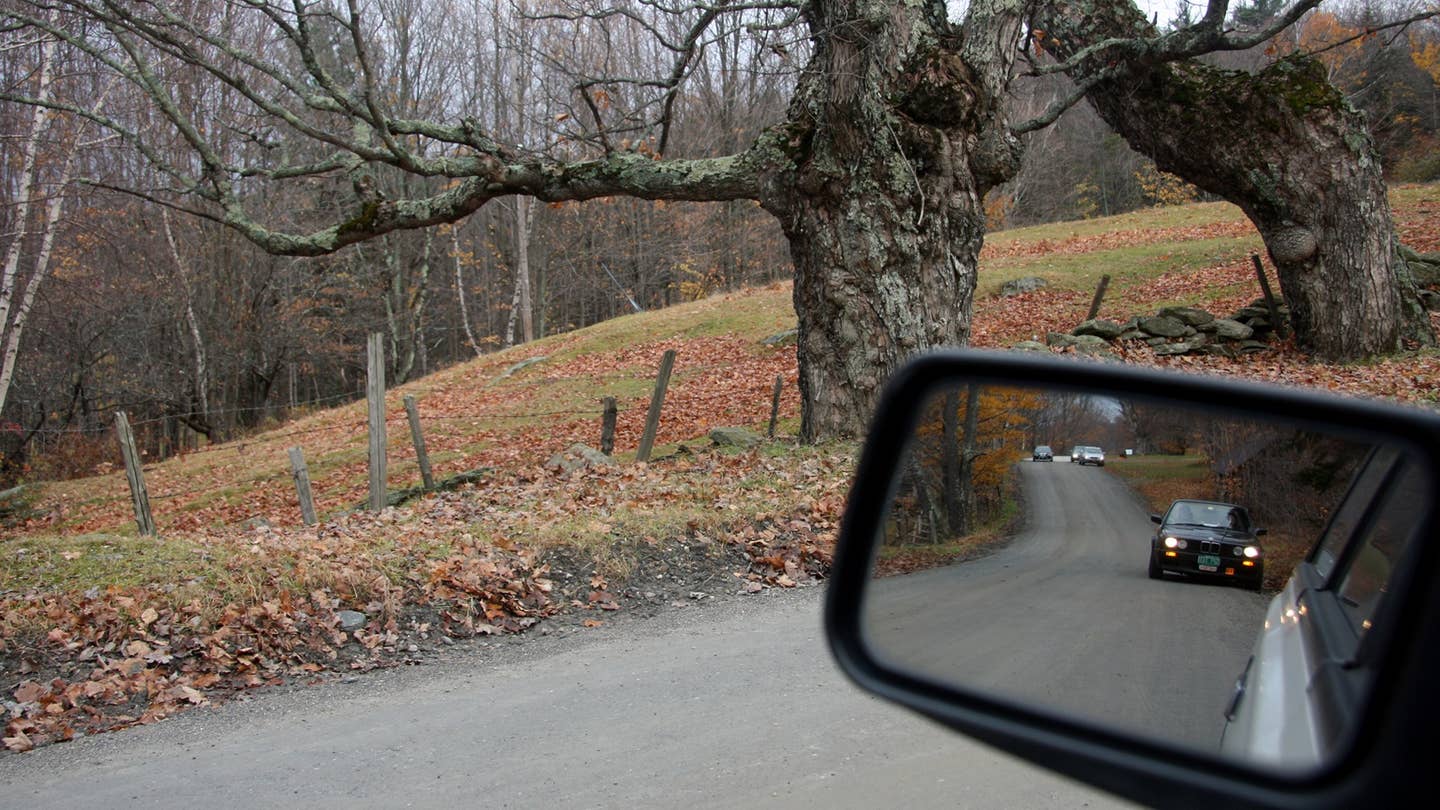 Sunlight stabbed intermittently through gaps in a flinty cloud layer blanketing the sky. When it did, the bright reds, bold oranges and crisp yellows of the fall foliage near Dover, Vt. was dazzling.

"Ok, drop your speed to 33—no, make that 32—at the 35 mile per hour sign... now," my passenger, a retired actuarial accounting consultant with an array of colored pens protruding from his shirt pocket, instructed. "We're looking for a 25 mph sign, where we'll drop speed to 23."

I did my best to follow his directions to the letter as I guided my 1987 Subaru wagon along a series of mostly dirt roads in the 50th annual Covered Bridge Rally, an SCCA sanctioned time-speed-distance event. My co-pilot, Clyde Heckler, said he had been doing rallies like this for decades, and his knowledge of the Byzantine rules governing time, speed and distance showed it.

If you're not familiar with the format of a TSD rally, it's fairly simple, if only superficially. You get a book full of instructions, there are a handful of random checkpoints and transit sections along the course and you have a very specific amount of time to get from point A to point B, point B to point C and so on. For every hundredth of a minute early or late you are at each checkpoint, points (demerits) are added to your overall score. The best score to get is zero.

"Let's see, if you look at this section—that's 10 hundredths at... Hmmm, wait a minute," Heckler muttered, punching some numbers into a small calculator fastened to his clipboard with fat rubber bands. Try as I might to understand what he was doing—I asked lots of questions—my mind was fuzzy with numbers that existed in a vacuum. To me, they were devoid of structure and meaning. The best thing to do, I reasoned, was pay attention to road signs and landmarks and follow directions closely.

We were entered in the stock class, which meant that we were using the car's marginally accurate factory speedometer to calculate speed and distance. The event had begun with a several-mile odometer check, so we had a rough idea what percentage over the actual speed the Subaru's speedo read. But for the most part, those parameters fell to guess work. Heckler said 33, so I went 35. If I had to slow down to get around an obstacle, I sped up for what seemed like an equal amount of time on the other side of it.

"For a novice rallyist there's an old adage: You want to concentrate on staying on course rather than staying on time, because it doesn't help to be on time if you're on the wrong road," Heckler explained. "One way to do that before trying to calculate anything is by running SOP, or 'seat of the pants.'"

SOP is simple, and is basically what I was doing. First, you get up to the speed indicated by the instructions as quickly as possible (not always an easy feat in an 85-horsepower station wagon). Then you exceed that speed mark by about 10 percent to compensate for slowdowns brought on by curves, hills, stop signs and other vehicles. You have to factor your odometer check into this, too.

Heckler said that ideally, a team will have the rally instructions mounted in the middle of the dash, where both driver and navigator can see them. One person – preferably the navigator – is in charge of crossing off instructions as they're passed. That way, the driver can see the next direction if the navigator is busy crunching numbers in the passenger's seat.

A good clock is also an important accessory to have on board. The winningest teams in TSD rallies are known as "zero heroes," and accurate time-keeping is among the more crucial factors contributing to a perfect score.

The driving in an event like this isn't fast – TSD rallies are usually run on open public roads at or below the posted speed limit – but it can be quick. If that doesn't make sense, think about driving down a dirt road with a 35-mph speed limit. Maybe driving on that road would be safer at 25, especially around corners. But you have to go 35 if you want to make the checkpoint in time. You aren't driving at blinding speeds, but it's fast enough to be a fun challenge. It keeps you on your toes, anyway.

Heckler and I finished the first half of the rally with 613 out of a possible 1,400 points. Not great, but we ran too far off course on one of the seven legs and took a 200-point hit, along with a few other screw-ups. But there were some single-digit legs in there, too, so we didn't feel too bad, especially as I had no idea what I was doing and Heckler had been out of the game for a while.

By the second half, we had tightened up our game, bringing our score down to 259. Still just okay, but I was proud of the improvement. A pair of guys from upstate New York had made the trek out in a rusty Subaru wagon, and they looked exasperated.

"Oh my gahd, we have no idea what the hell we're doing," one of them said between frantic drags on a cigarette as we waited for the second half to start. "Jeez, how do people do this?"

By the second half, he and his partner had brought their score from a maxed-out 1,400 to a more reasonable 722. The learning curve was working, and they seemed to have enjoyed themselves.

Heckler pointed out that most of the navigators looked like engineers or math professors. Like him, they had colored pens jammed into their shirt pockets and carried clipboards stuffed with instructions, tables and score sheets (TSD scoring is like bowling scoring on steroids, which is to say impossible). A glance into one of the cars at any given time during the rally would reveal a driver looking ahead and the navigator hunched over the calculator and clock, doing math professor things. When I looked around the room after the rally, it was filled with guys like Heckler had described. Together they could have staffed an entire aerospace contracting firm.

TSD isn't the adrenaline-pumping, G-force inducing madness you'd get at a track in a fast car. You can get the job done in a plain-Jane Corolla. But it does have its allure. There are a lot of moving parts—and at the end of the day, the driving is fun. I can't speak to what rallies are like in the rest of the country, but in Vermont, the scenery—which extends well beyond colorful leaves and Bernie Sanders placards—is an added bonus. Seriously, who doesn't like driving on dirt roads through the woods past wood frame farm houses and over covered wooden bridges? It's magical, even if you don't have a chance to get out of the car very often.

Will I do it again? Probably, but next time it'll be to conquer the nighttime winter rally that almost conquered me a couple of years ago. What better way to spend half a weekend than by driving along curvy, snow-covered dirt roads in the woods in the dark, for 12 hours straight?