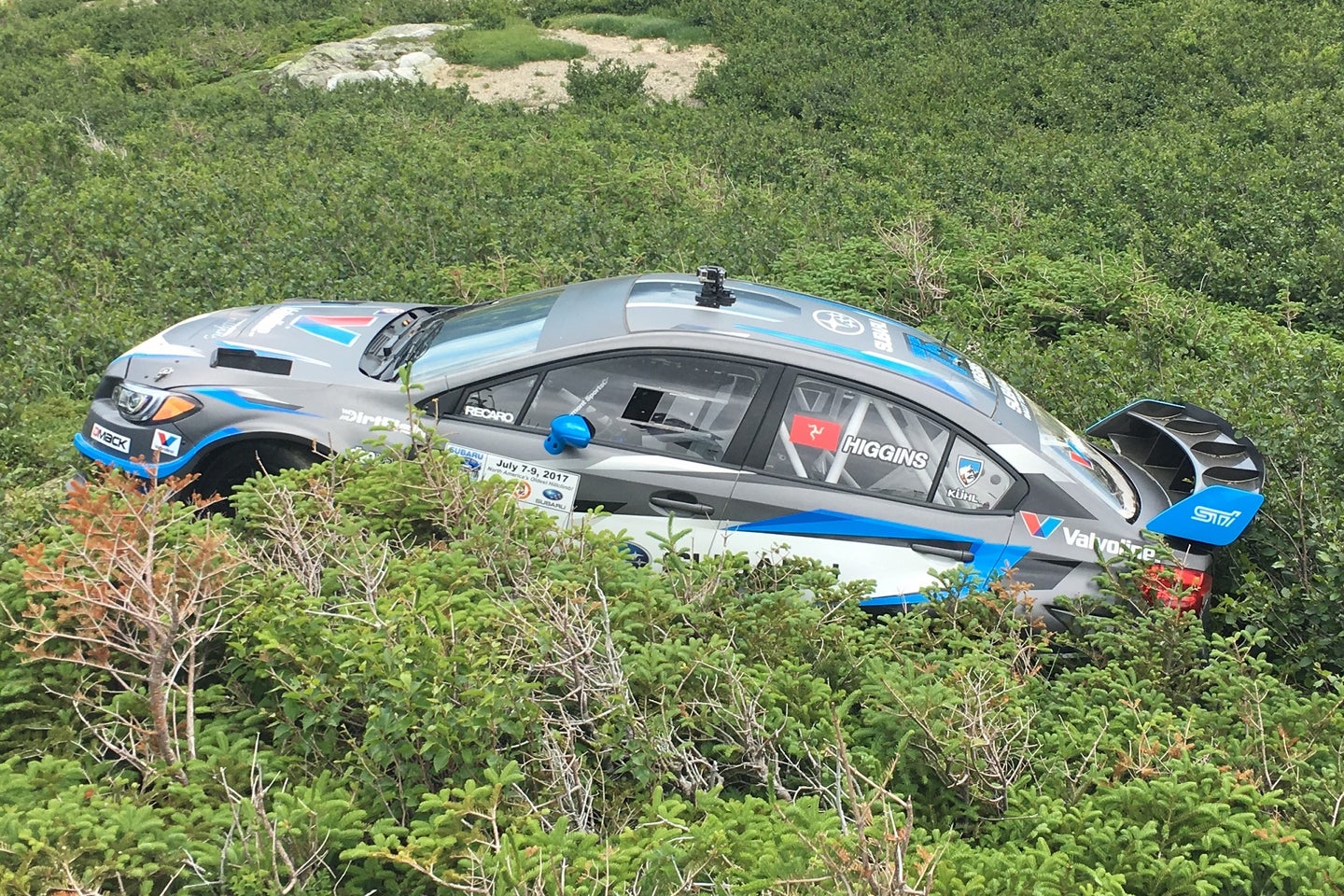 When Subaru Rally Team USA driver David Higgins crashed at this weekend's Climb to the Clouds at Mount Washington, New Hampshire, he basically handed teammate Travis Pastrana the new record. YouTube user "widdget" had climbed partway up the rock face overlooking this turn, and got the whole incident on video.

Higgins gave everyone at the Cragway spectator area a scare as he went into the turn too hot and clipped a rock, which broke his wheel and sent him spinning over the edge. No one could quite believe what just happened, and there were several moments of hesitation. Then several members of the media, who had been shooting from the inside of the turn and were the closest to the crash, along with an event volunteer ran across the road to help (I'm the one in the blue hooded jacket in the bottom left corner of the video thumbnail).

At that moment, I stopped being a journalist and became an unexpected first responder. Pictures could wait—we needed to make sure Higgins was OK and help him any way we could. Fortunately, seconds after we got there, Higgins began to get himself out of the car and told us he was all right. We relayed this to the spectators and other event workers and gave them the thumbs up sign.

As Higgins took care of a couple of final tasks with the car, his frustration almost broke through his calm, collected exterior. He didn't say much. He slammed a door slightly harder than necessary. Who could blame him? I offered to help him climb up the rocks to the road, but my help wasn't necessary as he made the climb himself. By the time he was in view of the spectators, he was smiling and waving as they cheered for him. At the request of the volunteer at the scene, I ran to his car and fetched some bottled water to give to Higgins. While I was away, a little bit of smoke started wafting up from under the car, at which point one of the other media people engaged the fire suppression system. Most likely it was the alpine shrubbery underneath the hot engine smoldering rather than the car itself.

After visiting the spectators, Higgins returned to our viewing area next to the road to watch the remaining runs. A true sportsman, he gave Pastrana a thumbs-up as he drifted past us on his way to beat Higgins' record. Likewise, as competitors paraded down the mountain when their runs were complete, Pastrana stopped to pick up Higgins and give him a ride back to their service area while his car was extracted. The picture Higgins posted on Instagram says it all.