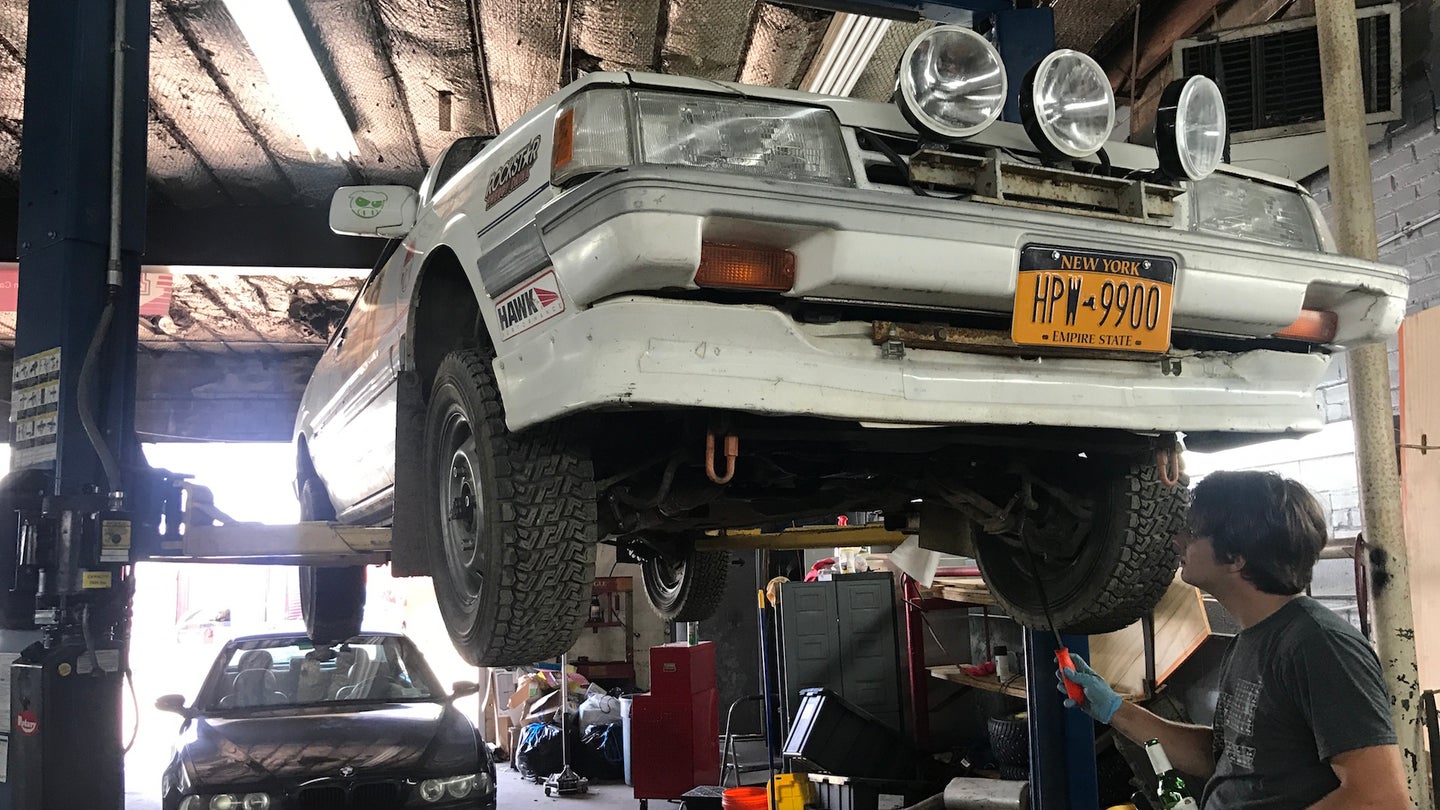 I've owned my 1987 Subaru RX rally car for about two months, but this week is the first time I'll be competing in an actual stage rally event with it...

...if I pass technical inspection, that is.

The plan is to run the grueling New England Forest Rally—commonly known as NEFR—up in Maine this Friday and Saturday with the RX. The reconnaissance (a.k.a. "recce") period to learn the stages is on Thursday, so I'll be traveling from New York to the rally site with the RX in tow on Wednesday. That means, as of the time of this writing, I have about 24 hours to make sure everything on the car is ship-shape, so I can actually take part in the event. Subtract the hours that I'm supposed to work and sleep from those 24, and it doesn't leave much time at all. [Having read this, we're assigning him extra work, as well. —Ed.]

Now, if you're familiar with the car I hope to field—presumably because you read my first post about it—you'd know that my Subaru is pretty much ready to go...or at least, it should be. It's a complete race car with a full cage, race seats, toggle switches, and all. But just because it looks like it can take on a rally stage doesn't mean it actually can. In fact, to my eyes—and thus, presumably to the eyes of the American Rally Association's (ARA) tech inspector at NEFR—it still needs a bit of fine-tuning before it's a safe, rally-legal chariot for myself and my co-driver.

What could possibly be missing?

Well, a couple of things. The RX is an old car. My car—or at least the roll cage—was originally installed according to the rules and specs of the now-defunct SCCA ClubRally series, according to the RX's logbook. It's apparently been updated since then, but that still means there's a lot of wiggle room as to whether it meets the ARA's rules...because most of the safety equipment and other gear required was installed before the current rules existed. Or, more to the point: It's up to the tech inspector to choose how forcefully he or she wants to enforce modern restrictions when it comes to my car.

A talk with a skeptical friend briefly gave me a scare regarding the rally-legality of the roll cage, but after nervously contacting the event's tech inspector and sending him a handful of pictures of the in-car scaffolding, my fears have been—at least temporarily—put to bed.

But the cage is just one small part of my worries. On top of that, when I bought the car, both race seats were past their use-by dates, the fire extinguishers appeared to be mounted improperly, the rally intercom didn't work, the harness belts were expired, and it didn't have an electronic kill switch. I wish I could say that I've taken care of these issues, but for the most part...I haven't. Which I now very much regret. (Don't procrastinate, folks.)

What I have to do:

I have most of the spare parts needed to whip my car into shape, thankfully. But there's a lot of work that needs to be done—and not a lot of time to do it. New harnesses have to go in, the seats have to be remounted (though I may need at least one new mount), an electric kill switch is on its way (side note: I don't know how to wire things), and I'm hoping I can find fire extinguishers that fit the in-car mounts somewhere between here and Maine.

I'm not doing it alone. I've enlisted the help of my co-driver to help get the RX together, and I'll be using another friend's shop space to work on the car.

But...like I said, I have only about 24 hours to do all this. So let this be a warning, folks: Don't be like me and wait until the last second to bring your project car up to snuff.