The Oppo Rally: The End of the Road

As we reached the center of Connecticut we ran into both logistical and mechanical problems. 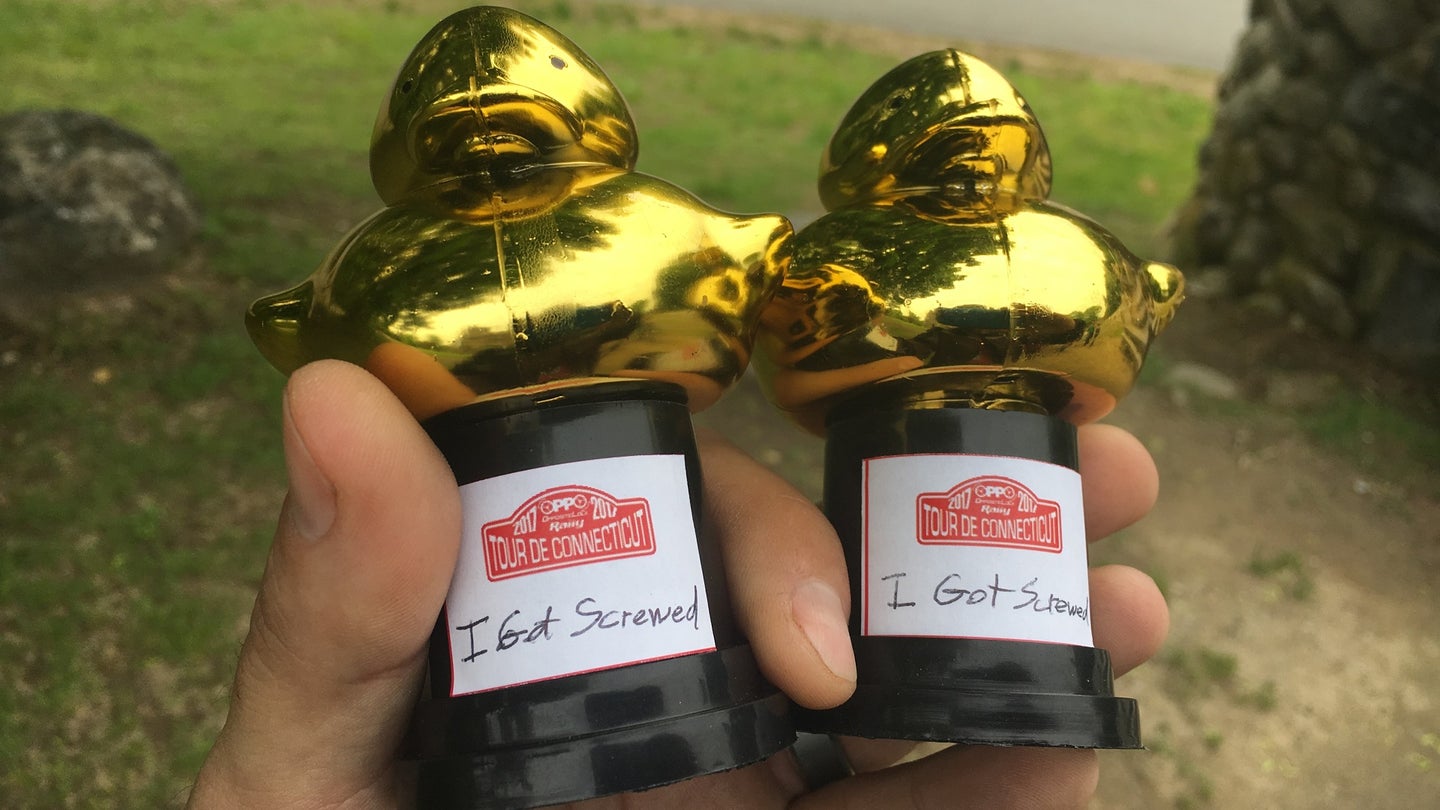 After scoring a bunch of points in western Connecticut, we hit the highway to the town of Meriden in search of a traffic control tower that the police used to use to manage traffic through the center of town. But on the way there, our Ford Flex began making some an unusual high pitched whistle under throttle. Power seemed to be a little a little bit down as well, though the 3.5-liter EcoBoost V6 is so powerful it's difficult to notice. We were on four-lane divided highways all the way to Meriden, and there was nowhere to pull off and investigate the problem. So with my wife worried about the welfare of her precious car, we pressed on to our destination.

Finding the tower was easy, right in the center of town. Figuring out how to get to it and park legally was quite difficult, though, with numerous one-way streets and turn-only lanes all over the place. No wonder they needed this tower back in the day. Eventually, by leaving the center of town and coming in from a different direction, we got to a police parking lot where we could not only pull in for our photo, but also pop the hood and try to diagnose the car.

Not long after I popped the hood, a police officer in his personal vehicle stopped to see what was going on. I told him the car had started making a funny noise, and we had stopped to check it out. No problem, he said - if we needed any help, there were plenty of cops around to assist us. This, our only police encounter of the entire rally, was a pleasant and helpful one.

Between the whistling sound and the drop in power, I suspected a crack or disconnect in the air intake between the two turbos and the throttle body that was leaking boost. I checked all of the pipes I could see and reach safely around the hot engine, but discovered no obvious issues. We decided to press on with caution and continue to monitor the situation closely. So we set a course for the Balancing Yugos in nearby Middletown.

We hopped back on Interstate 691. As I accelerated to highway speed, the whistle went away - and so did much of the engine's power. It still ran smoothly, and there was no check engine light, but the EcoBoost engine appeared to have suddenly lost all of its boost. Now, I'm all for the stage rally philosophy of "Press On Regardless." It's a battle cry among rally enthusiasts, who love to see a badly damaged rally car continue to four wheel drift down the final stage of a rally. But this wasn't a dedicated rally car. This was my wife's daily driver, one that she would need to ferry the kids around to their various activities the following week. Because of that, we made the difficult decision to withdraw from the rally and immediately set a course toward home before it got worse. At worst, at least we would be within the 100 mile AAA Gold towing radius if the car failed further. Fortunately, it suffered no further issues as I drove conservatively all the way home.

The following morning, I left my wife to sleep in, hopped on my motorcycle, and rode to the Bancroft Tower in Worcester, MA, for the rally award ceremony. Because we withdrew I knew we had no shot of winning anything, but I wanted to go socialize and actually chat with some of my fellow competitors, swap some stories and such. There were some good ones, such as how the gates to Thompson Speedway were wide open after dark, allowing one team to actually park their car on the track for a 100 point bonus.

Honorable Mentions also went to Plastidip My Shame for turning a classic air cooled Porsche 911 into a Pokemon; Team 15 MPG for hitting the most checkpoints, 26; and Team Grocery Getter for coming all the way to Connecticut from Wisconsin for the Oppo Rally.

Team Rusty Truck also won the Organizer's Choice award for the massive effort the owner, Pixel, made to build the truck in just two weeks. The Oppo's Choice award went to the Putt Pirates for their hilarious photos and updates from the road. And finally, the special award to be decided by Dusty Ventures after the event went to the team that withdrew the third newest car in the rally after suffering a mechanical failure. That's right, my wife and I were awarded the "I Got Screwed" trophy.

Immediately after this Oppo Rally was over, people were asking when the next one would be. Dusty confirmed that yes, he would be running this event again. I have every intention of returning, hopefully not to win the "I Got Screwed" trophy next time. In fact, by the time the next Oppo Rally happens, I should have our VW Jetta Smyth Ute finished, or at least able to drive. Rather than rack up miles on (and break) my wife's daily driver, we plan to rally the Ute - and score some bonus points for bringing a kit car.

The Oppo Rally: Steaming Across Connecticut

We began putting some miles behind us to hit every checkpoint in the “Because Racecar” category.

The Oppo Rally: Racking Up the Points

Our first destination was the Bridgeport, Connecticut area, which contained many checkpoints to score lots of points quickly.

The Oppo Rally: Strangeness and Strategy

Along with some strategizing, we got to see some interesting cars at the start of the rally.

Sixteen teams from the Oppositelock group invaded Connecticut for a statewide scavenger hunt.