Don’t call it an Optima, either. 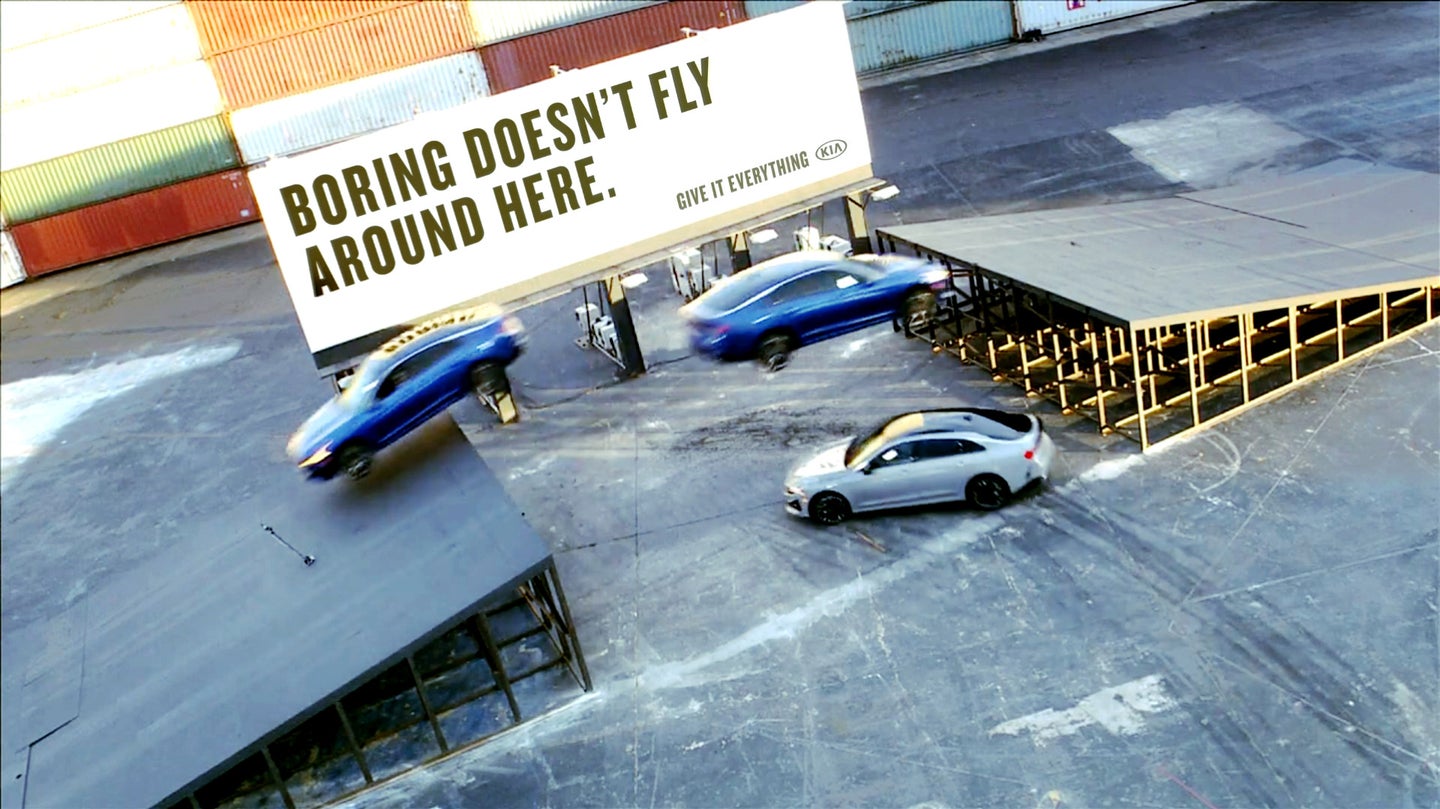 Kia has launched a new ad campaign for the 2021 Kia K5, formally known as the Optima, and it’s not what you'd expect. The K5 is Kia’s most powerful midsize car to date, and the brand wants to prove it’s not your typical “boring” rental fleet commuter. This new ad campaign is driven by one philosophy, “Give It Everything,” and to prove the K5 can walk the walk, Kia decided to use it as a full-on stunt car.

The first of several stunts streamed live this week on July 29, and it featured three 2021 Kia K5s performing a choreographed car stunt called the “Triple Threat.” It involves two cars launching off a ramp while the third slides into a 180-degree spin under them simultaneously. The stunt K5s look factory-stock apart from a stripped-out interior necessary to install a roll-cage. The livestream video was hosted by professional driver Collete Davis, featuring stunt drivers Sean Graham and father-daughter driving duo Jalil Jay and Brionna Lynch. Darrin Prescott directed the stunt, with films like Ford v. Ferrari, Baby Driver, Drive, and Black Panther on his resume working as a unit director. Skip ahead to minute eleven to see that actual stunt being performed.

The 2021 Kia K5 offers a wide spectrum of performance levels from one trim to the next. The base LX model starts at under $24,000 using a 1.6-liter turbocharged four-cylinder engine making 180 horsepower. Meanwhile, the top-tier GT model can be optioned with a 290-hp, turbocharged, 2.5-liter four-cylinder for just north of $30,000. Both are fitted with eight-speed automatic transmissions, and all-wheel-drive is available for the GT, though sadly not with the 290-hp engine.

Kia’s “Give It Everything” campaign sparks nostalgia for an almost forgotten era of the traveling auto stunt shows. Back in the 1950s and ‘60s, Joie Chitwood’s Thrill Show and The Hell Drivers toured the country in factory production cars jumping off ramps and sliding in front of a roaring crowd as a marketing campaigns for Chevrolet, Plymouth, Dodge and more. It is refreshing to see Kia making a great effort to prove that the midsize sedan isn’t dead and doesn’t have to be mundane.

And don’t forget the dual-clutch automatic.