Tear Your Kids’ Faces Off With Brutal Speed in This AWD, 1,665-HP Honda Odyssey Hybrid (UPDATED: Not Real)

It’s also got a six-speed manual gearbox, as if you didn’t love it enough already. 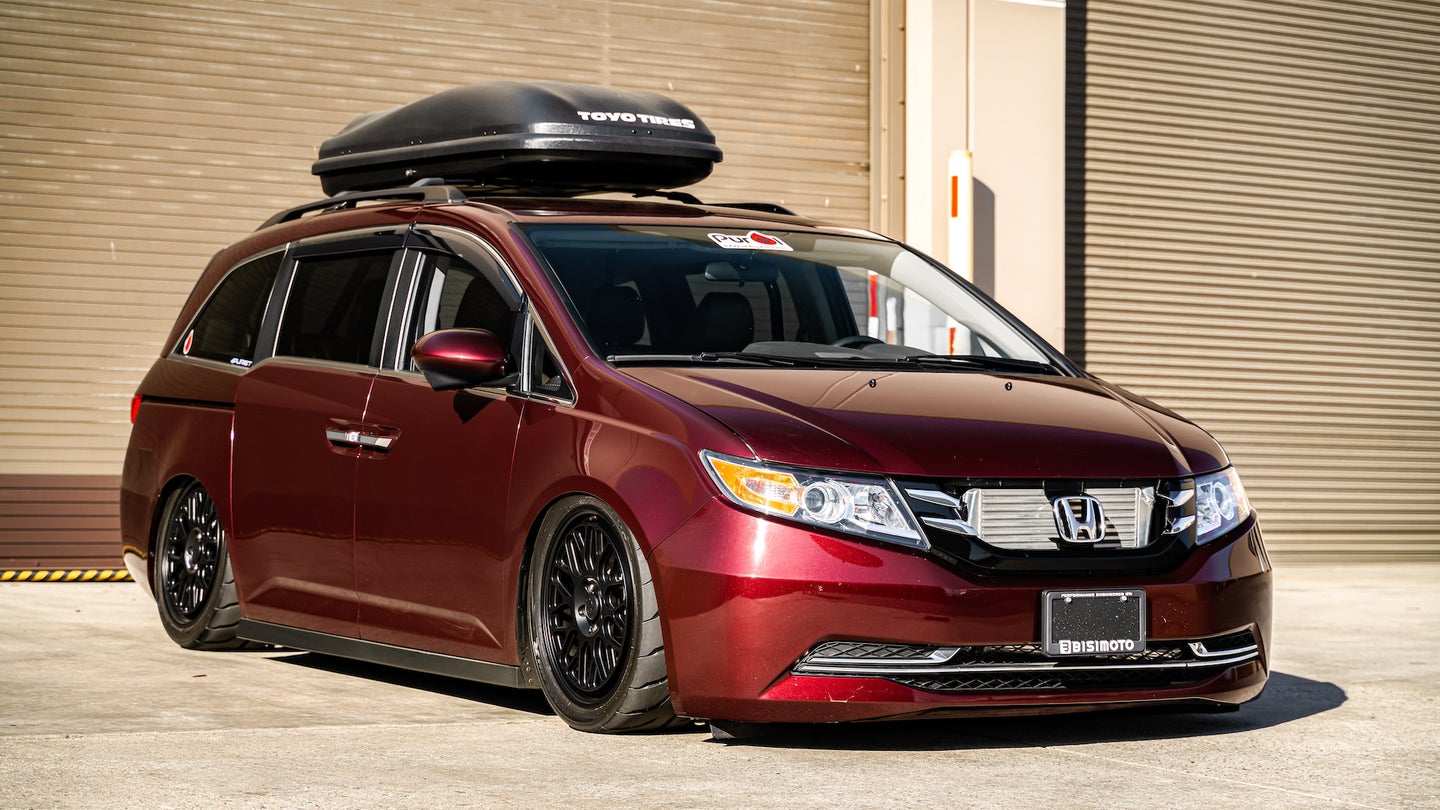 Possibly the last thing any sane person with a 1,029-horsepower, front-wheel-drive Honda Odyssey would think to themselves is "this car needs more power." Yet horsepower is addicting, and as any addict can tell you, more is never enough. That’s why Bisi Ezerioha—proprietor of Los Angeles-area speed shop Bisimoto Engineering—decided to throw an electric motor on the rear axle of said thousand-horse Odyssey to pump it up to 1,665 horsepower.

UPDATE 4/2 2 p.m.: A representative of Bisimoto Engineering confirmed the build is in fact an April Fool's Joke. Although a photographer and the company's social media posts initially claimed it was real, we at The Drive regret the error. The shop says it may become a future project, but for now it is not real. The original text is below.

This particular Odyssey has long been the source of tuner-crazed fanfare as it originally broke cover with absurd amounts of turbocharged horsepower. It debuted at SEMA in 2015 with all that power going to the front wheels through an Acura TL-sourced six-speed manual, and it even made an appearance on The Drive's /TUNED series with Matt Farah.

Since then, though, it's taken on yet another crazy form.

Ezerioha's social media suggests he electrified the Odyssey's rear axle by way of a large Tesla drive unit, which he fit with a Quaife mechanical limited-slip differential before mounting it to the Odyssey's rear with a custom, boxed-steel subframe. Making the Tesla unit work in the Odyssey would've been a trifle, as off-the-shelf controllers capable of cranking Tesla motors up to 475 kilowatts (645 horsepower) have been available for years. With one of those in hand, all Ezerioha would've needed to complete the hybridized Honda would've been a power supply, and those too are easy to get from wrecked electric cars (or to assemble yourself if you have the know-how).

Ezerioha explained in a YouTube Q&A session that he originally sourced the Odyssey as a family vehicle, so we have every reason to believe it still seats the seven or eight people it did from the factory. In theory, its power output and seating arrangement make it analogous to a more practical, more affordable Koenigsegg Gemera, though unlike the Koenigsegg, it won't be a cop and smartphone magnet everywhere it's driven.

That is, if it wasn’t slammed on air suspension, or didn’t have an enormous intercooler where the front grille used to be.

A new accessory package and trim-specific wheels commemorate the popular minivan, which was born in 1995.