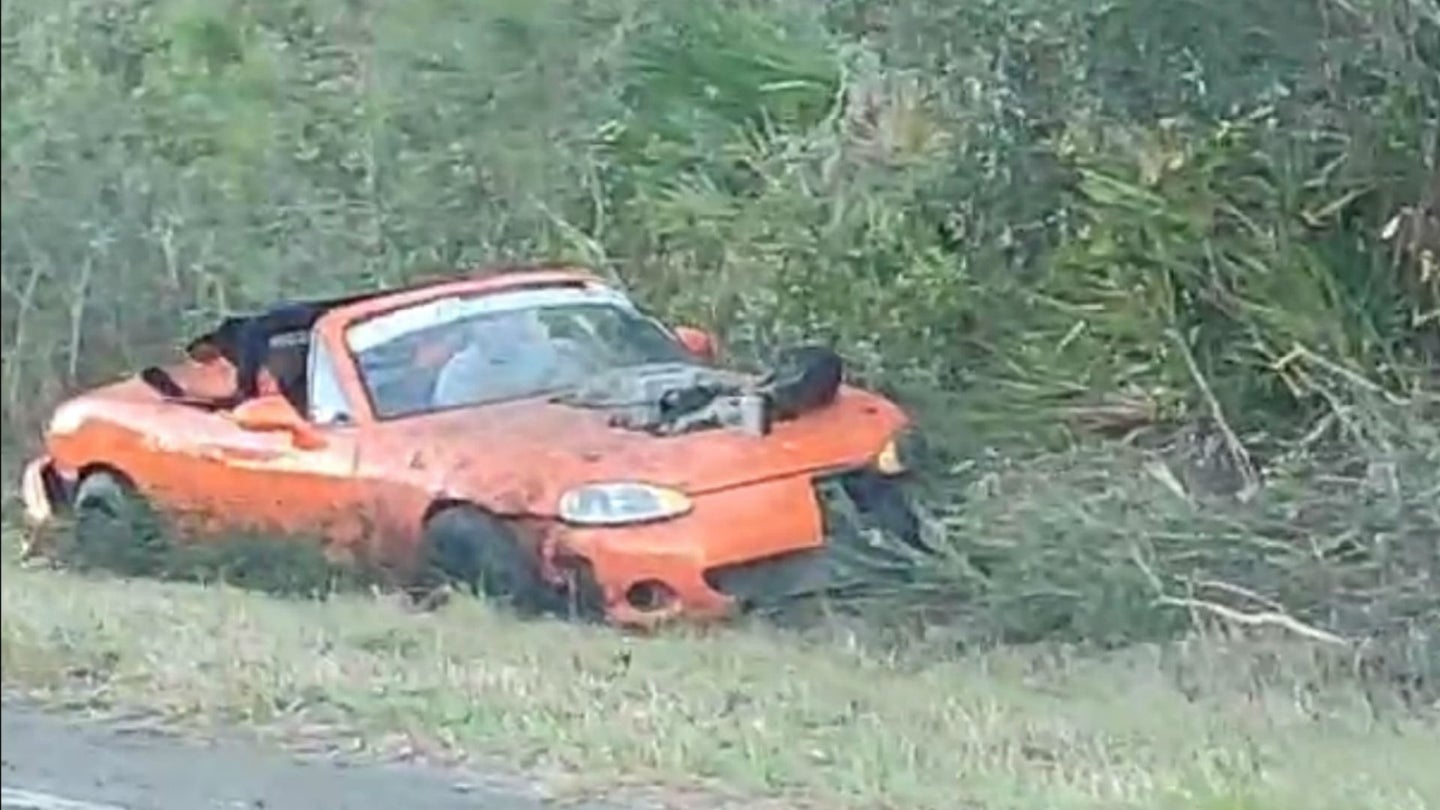 The infamous "Hellkitty" Mazda Miata, powered by a 707-horsepower Hellcat Hemi V8, might be one of the internet's favorite cars. From tearing up Hoonigan's Donut Garage to crossing the Barrett-Jackson auction block last October, people have followed the hilariously overpowered roadster from one place to another with admiration, and maybe a bit of terror. However, if you were literally following it around, you'd now be in a ditch somewhere in Florida as it was crashed following a short pull while leaving a car show.

Photos of the wreckage were blasted across social media with keyboard warriors out in full force. Most people pointed to the "What did you expect?" angle, while others criticized the driver for having too much courage and not enough brains. That last bit was addressed promptly by Michael Kelly, who scooped the car up from its original builder late last year and was driving the Hellkitty home from a local event when the crash took place.

"Today was a huge eye opener," Kelly explained in a Facebook post. "We had a near death experience. Thank you everyone who’s asking if we are okay. Leaving a car show today, I did a small pull. When I hit the brakes to slow down I had a caliper lock up. Before I could get off the brakes, the car was already in the grass. I got sucked in and the car did a 180 in the ditch. Mechanically, the car is still 100 percent good. The body has a few dings and scratches. The tail lights and bumpers are damaged. It was a scary experience. Just thankful that it’s just a small repair."

"Drive safe and keep the stupid stuff on the track," he concluded.

As Kelly mentioned, the damage doesn't look to be too bad. Miata body panels are far from rare and it appears as if the holy-grail drivetrain went largely untouched—a miracle considering the 6.2-liter Hemi's supercharger sticks out through a hole in the hood.

Repair costs look to be minimal, at least on the surface, considering how bad this situation could've been. You'd have a hard time getting insurance to cover much beyond body damage in the first place; after all, how many 20-year-old Miatas are actually worth what Kelly paid for this one at Barrett-Jackson?

Regardless, it's gut-wrenching to see a build with so many hours of work in need of repair, but at least no one was hurt. If you take anything away from this incident, make sure to always be careful when leaving your neighborhood cars and coffee—as if you needed another reminder.