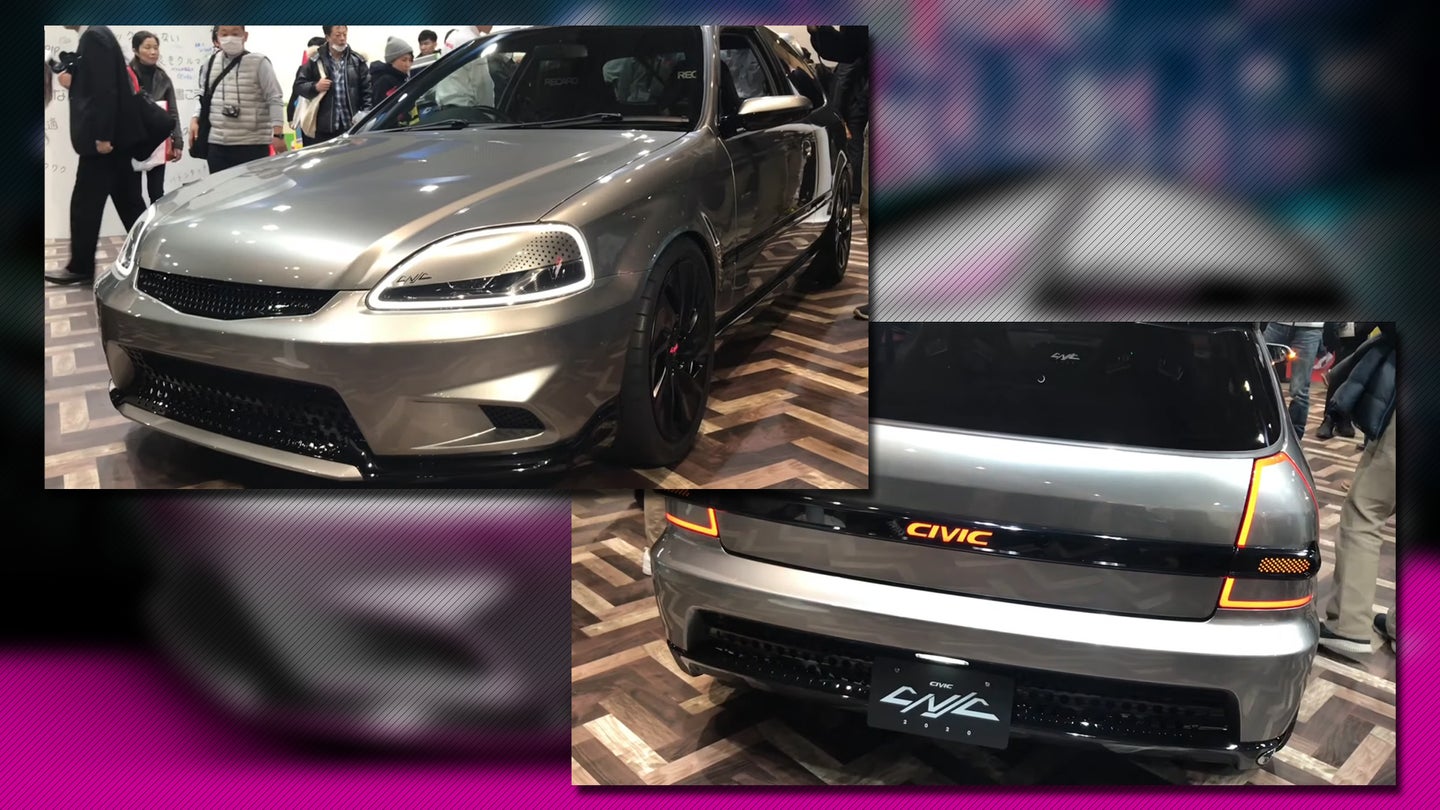 The Tokyo Auto Salon has wrapped up another year of showcasing stunning automotive creations, and one manufacturer stood out amongst the sea of custom builders and aftermarket tuners—Honda. Most notably, the Civic Cyber Night Japan Cruiser 2020 on display evoked a retro-futuristic feel that any hot hatch enthusiast will want to see more of down the road.

The Cyber Night Japan Cruiser made its debut at Honda's booth alongside the anticipated S2000 20th Anniversary Prototype. It pays homage to the EK9 Type R, one of Honda's first true hot hatches of the '90s. With a rather gutsy 185-horsepower, 1.6-liter four-cylinder under the hood, who could blame tuners for flocking to the platform?

Despite its modernized look, this particular example feels right at home to JDM lovers. Its beautiful silver coat is carefully underlined by gloss-black trim and pink accents to give the car a race-inspired vibe, while tech-heavy accents begin to hint that, much like the car, Honda itself is transforming for the future.

Starting at the back of the car, one will immediately notice the fancy Civic's unique taillights. While the stock EK's rear profile is retained, the new design is aimed at appearing more modern by trimming the gleam of the lights to thin strips along the silhouette. The tails continue to form a thin heckblende-like bar spanning the entirety of the hatch with circular cut-outs for LEDs and an illuminated Civic logo in the center.

Look a little bit lower and you'll notice the cheese grater diffuser below the bumper. It might look like a take on Apple's newest computer, but it's actually matching the polka-dot pattern of the taillights and carefully hides a false exhaust tip on the right side.

Follow the black-trimmed side skirts up to the front of the car and you can find the same grille style, as well as a familiar headlight design. Again, it's aimed at following a cyberpunk-like light bar.

The interior has been overhauled to incorporate a contemporary touch into '90s styling. From the moment the driver positions themselves in the body-hugging Recaro seats, a certain futuristic vibe begins to flow.

For starters, the gauge cluster touts a digital speedometer and in-your-face tachometer that features a sweeping crescent-shaped accent along the needle's path. The infotainment system appears to be less car-centric; a single dock sits in the center of the dash with a lightning connector just waiting for an iPhone to plug into.

Perhaps most exciting is the machined shift knob near the center console, showing that the manual transmission is still in someone's thoughts at Honda corporate.

Booth attendees have reportedly told onlookers that the automaker has no plans to launch the vehicle en masse, meaning that this show-going concept is simply that—a concept. No surprise there.

Honda previously cited the "modern youth" as its inspiration for the Night Cruiser, saying that the car reflected an image of "a neo-Japan where the near future and underground are disturbed." While this might be a total marketing ploy, we're all for it if it means Honda keeps a bit of flair in mind for future hot hatches.

Besides the two kei utes, a Swift Sports Yellow Rev concept will also be on display at the Suzuki booth.