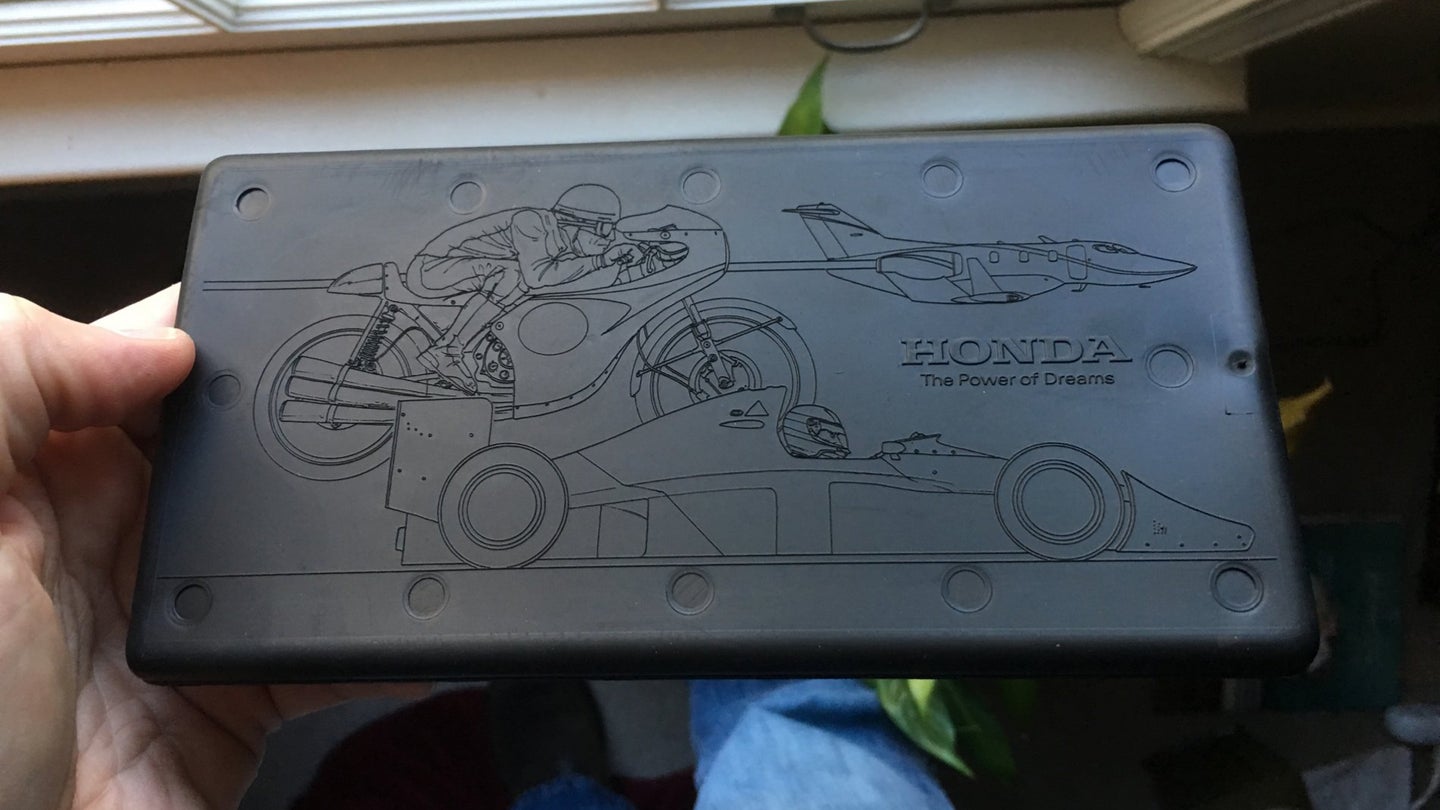 Finding an easter egg in something you own is fun. For many auto engineers, it's almost an unwritten requirement to incorporate a small personal touch into every design. There's the Jeep Renegade's "ciao baby!" spider, the Tesla Model X Holiday Show, and even a big cat placed in the windshield surround of the Jaguar E-Pace. Then there's Honda, whose engineers are so proud of the company's diverse background that they placed various callbacks to Honda's motorsport-rich heritage in a place most would never expect to look.

The center console is the dumping ground for all things unknown. It's the kitchen junk drawer of pretty much everyone's car. But if you happen to own a 10th-generation Honda Civic, it's the one place where you will find Honda's nod to motoring success.

At the bottom of the center console is a mat—you know, that small piece of rubber that makes it easy to clean all of the dust and crumbs from the tiny compartment? Turn that over and in many cars, you'll find a plethora of retro racers, motorcycles, planes, and tech that reminds you of Honda's gigantic footprint.

The image depicts a story of Honda's storied history. The cafe racer atop a Honda RC166, the McLaren MP4/5 (which was famously piloted by Ayrton Senna and powered by Honda's powerful naturally-aspirated V10 engines), and even the HondaJet.

But that's not all. According to a thread on CivicX, it was revealed that Honda worked in not just one, but four different variations of its Power of Dreams mats inside 2016-present Civics.

Both the RC213V and NS500 motorcycles got love in other designs, as did Honda's ASIMO robot. Various other race cars called these stamps of rubber home as well, including the Honda S800 RSC, Honda RA106, Honda RA272, and the Curtiss Special—which didn't wear the Honda moniker but was still wrenched on by founder Soichiro Honda nearly two decades before the brand was officially born.

For sedans made at Honda's Yorii plant, the console mat could look a bit different. Some forum users posted photos of a unique design found in some cars manufactured in Japan, featuring side profiles of all 10 Honda Civic generations under Katakana which simply reads "Honda Civic".

It looks to be a luck-of-the-draw as to which mat each Civic gets; however, the designs seem to appear in at least EX and above trims. Some cars have them, while others simply have a plain rubber mat stamped with a part number.

If you own a 10th-generation Civic, roll the dice and dig out all of the junk stored in your center console to see which one the Honda gods have bestowed upon you.

Both muscle-inspired models currently ride on a platform that’s been around in one form or another since 1995.

You’re never too old for an Easter egg hunt.