You Won't Find a Crazier Toyota Tacoma Than This NASCAR-Engined, Widebody Show Truck

With 900 horsepower and a rear wing the size of Texas, there's no missing this Taco. 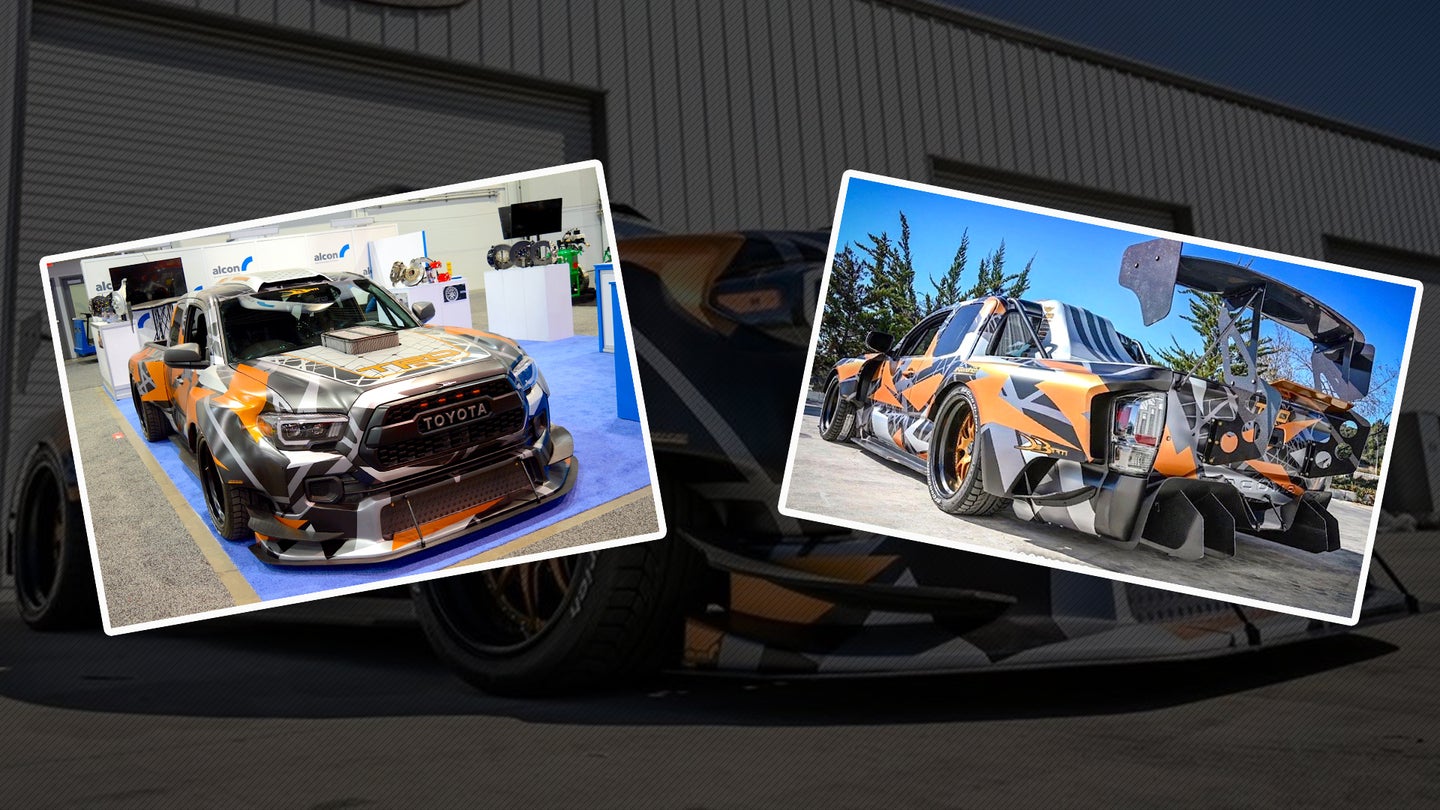 Anymore, you can't get by in the aftermarket world with a lowly engine swap and new wheels. It now takes a ridiculous level of customization that brings the project vehicle to a whole different level, like dropping a 900-horsepower NASCAR engine into a slammed Toyota Tacoma. Reconfigure the bodywork to stick out about a foot further on both sides and you're getting there—fit a wild rear wing and diffuser, then you've got DeBerti's truly insane truck that'll make you question what's possible and, perhaps most importantly, what's reasonable?

Certainly not this, but that was never the point. The 2019 Tacoma has been completely refabricated with a bespoke frame and suspension upholding the ultra-powerful machine, allowing it to run on pavement as well as gravel. Think it sits a little too low to drive on anything less than ultra-smooth roads? You'd be right in a way, except that the 'Yota's ride height can be adjusted in a pinch when the builders feel like ripping down a backroad...still yet, it's probably best to keep it on the highway.

The truck supposedly has 74 degrees of steering angle, making massive slides easier than ever.

Lying under the Advanced Fiberglass Concepts body and nestled into the engine bay is a Toyota TRD NASCAR Cup motor that revs to a mighty 10,000 rpm. It puts out a bit more power than the Tacoma's most potent engine from the factory, a comparatively teensy 3.5-liter V6 that makes 278 hp. It's certain that all this output will never reach the ground, but then again, when has that ever been a concern when your sole mission is to turn heads?

Even if the thunderous V8 roar isn't enough to make you rubberneck when the truck passes by, the wild aerodynamic components will. A custom-built rear diffuser pairs with a wing of silly proportions to create what is an incredibly divisive look that'll have some drooling and others crying out with obscenities.

After debuting at the 2019 SEMA show, the Tacoma has been making its way around the internet. It'll supposedly continue to do so as long as it's still sliding around and causing a ruckus, so fret not if you want to see more. If you're fed up with this type of show build, then we recommend you stick to your preferred circles and steer clear of anything on modern car TV.