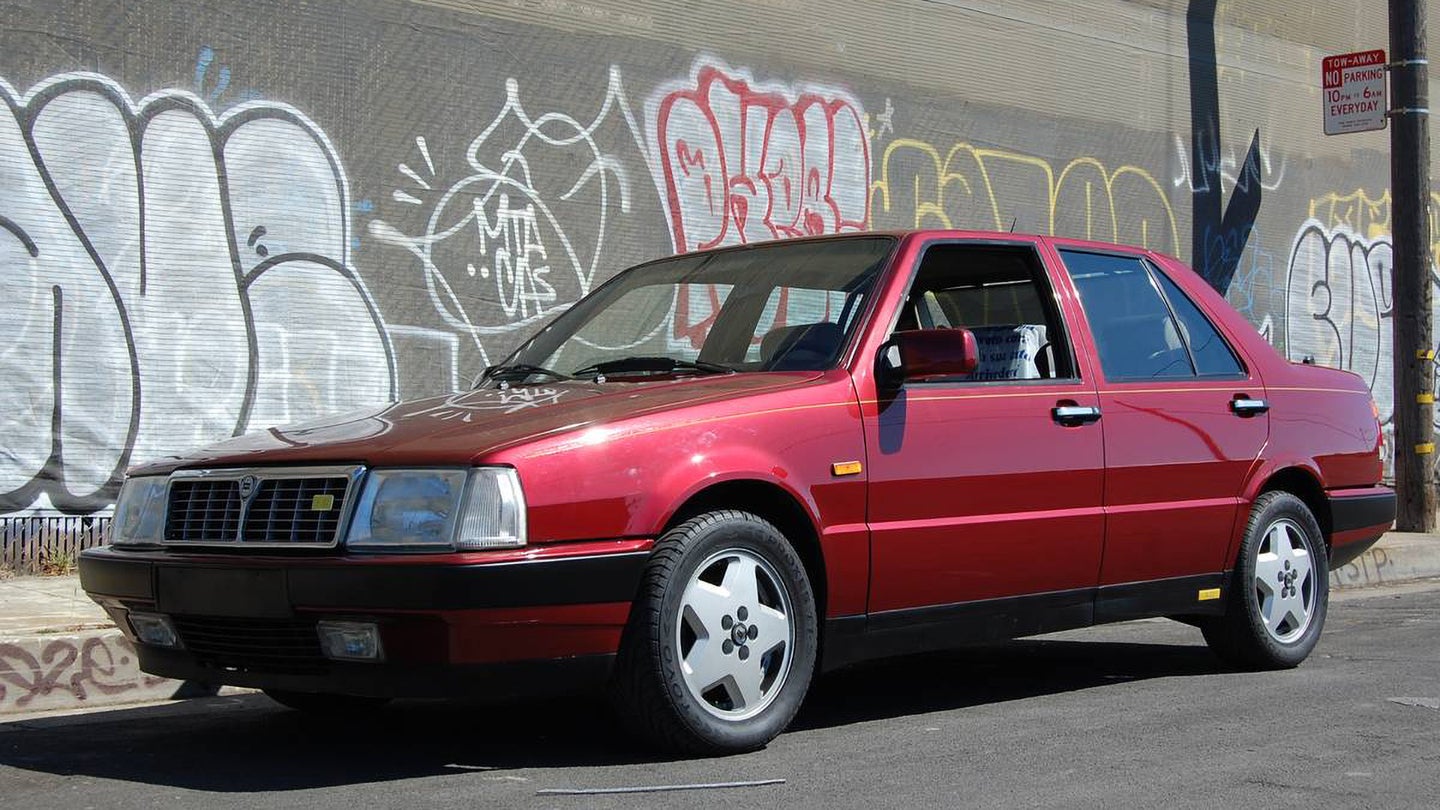 Car manufacturing in the 1980s was filled with unassuming boxy designs. Volvo, Ford, Lamborghini, and every manufacturer in between went protractor crazy. But a handful of these brick-like designs hid true beauty underneath their hoods. Take for example the Giugiaro-designed Lancia Thema 8.32 and the fire-breathing Ferrari V8 powering its front wheels.

Having just popped up on Craigslist in Monterrey, California for $35,975, the "8.32" specification stands for the use of its 32-valve Ferrari V8 engine. First featured in Ferrari’s mid-engine Mondial, the 308 GTB and GTS QV, the Tipo F105L “Dino” V8 was reworked to fit the Thema’s executive car persona. Originally, its Dino V8 featured a flat-plane crankshaft as typically used in its Ferrari applications, but a cross-plane type crankshaft was swapped over. Engineers also detuned the engine with smaller valves, and a different firing order and tune. It was then finished off by Ducati before being placed in the Thema on the assembly line to produce around 212 horsepower and 210 pound-feet of torque.

Unlike other Ferrari-powered cars of the time, the Thema 8.32's V8 drove the front axle via a manual transmission and perhaps made it the only car ever to do so.

With fast reactions, the Thema 8.32 led to a 0-60 time of just 6.8 seconds and onto a top speed of 150 mph—blistering figures for a humdrum four-door sedan in the late 1980s. Such figures meant that it competed in the same league as the BMW E28 M535i (the precursor to the M5), the Ford Sierra RS Cosworth, the Audi 100 Quattro, the Saab 9000 2.3 Turbo S, and above all, the Vauxhall Lotus Carlton/Opel Lotus Omega duo.

This specific car, being a 1988 model, means it benefited from a few mechanical and aesthetic updates with the car's when-new model refresh. According to the listing, this Thema 8.32 had a significant engine-out service, which is similar to its Ferrari cousins powered by the same motor. The service included a complete refurbishing of the motor’s top end, new timing belts and idlers, new piston rings, a new flywheel, a new clutch, and an overhaul of the ignition and Bosch fuel-injection system. It also includes a completely new exhaust system which likely sounds fabulous.

In addition to the engine-out service, the Thema 8.32 underwent other major mechanical and cosmetic restoration over the past six months. Its brake calipers were rebuilt and the owner overhauled the entire front end, replacing the car's bushings, bearings, seals, and constant-velocity joints with new parts. It was then fully detailed with a paint correction job, repainted bumper covers, and a new undercoat, which also revealed a rust-free undercarriage. The interior also received a similar level of attention and restoration.

All in all, if you're so inclined, you would not only get a Ferrari-powered '80s brick for all your Radwood dreams, but it looks like nothing on this example was overlooked, giving this rare beast the potential for a long-lasting life of fun and V8 burbles.