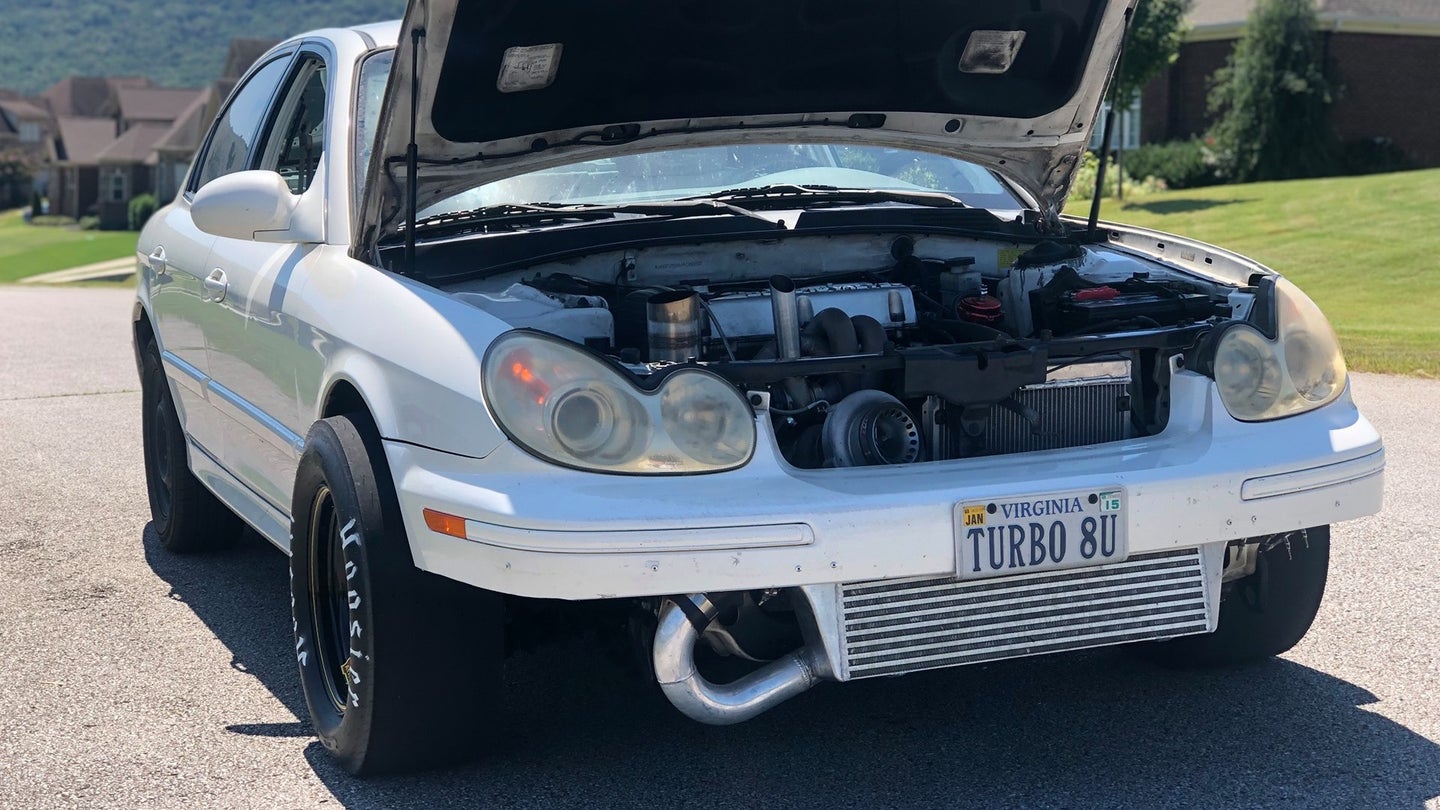 For most people, the question of "how fast can I go for as little money as possible?" is answered by sticking to the beaten path; by buying a car with a stout aftermarket. But some people have a fierce streak of individuality that leads them to seek speed where others wouldn't, and these are the kinds of people who build cars like the one you see here: a 2004 Hyundai Sonata making over 500 horsepower with a mix of almost-stock internals and bolt-ons borrowed from other cars.

This hyper-Hyundai is the work of Huntsville, Alabama-based, one-man speed shop Hurst Built. Its owner explained to The Drive that despite the lack of an aftermarket for the Sonata and 162,000 miles on the car, the build was more straightforward than you might think. See, four-cylinder Sonatas of this vintage run on a 2.4-liter engine called the G4JS, which is basically a license-built version of the Mitsubishi 4G64—a close relative of the legendary 4G63T from the Lancer Evolution (and other quick Mitsubishis). Unlike the single-cam 4G64, however, the G4JS has a twin-cam head, complemented by a cast-iron block and forged steel connecting rods from the factory.

Because of the G4JS's surprising appetite for boost and mechanical similarity to the Mitsubishi 4G63T, Hurst Built was able to bolt an exhaust manifold and bigger injectors designed for the Lancer Evolution straight to the G4JS, along with a Precision 6266 turbocharger making 30 pounds of boost. After a few other tweaks and an ECU borrowed from the owner's 715-horsepower Eagle Talon, this high-mileage Hyundai made a trip to the dyno, where it laid down just over 500 horsepower, its internals still fully stock at the time.

Since the above video went online, Hurst Built's Hyundai has earned an unprecedented following in Korea, where this generation of Sonata was as ubiquitous as the Ford Crown Victoria once was in America. In that time, the car has also traveled more than 1,000 miles on the tuned engine and factory transmission without any apparent reliability issues. Problems may eventually present themselves when Hurst Built uses an E85 tune and a newly installed aftermarket cam to push for 600 horsepower, but with how far the lad has come on such a lightly modified engine, we're rooting for him to smash that barrier in tire-smoking style.