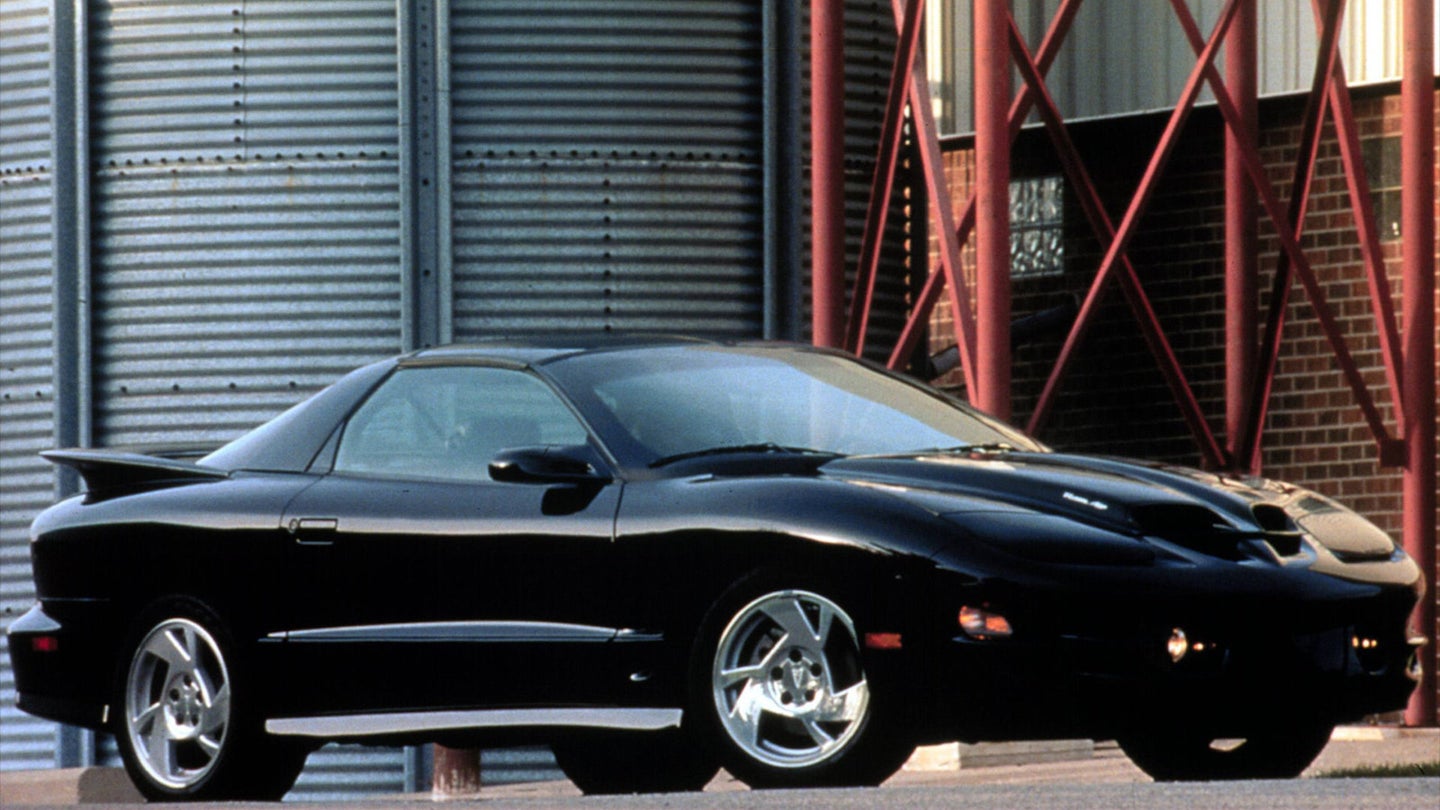 Every young car enthusiast has a wish list for their first car. There are the traditional picks—Chevrolet Camaro SS, Nissan 240SX, Volkswagen GTI, Mazda MX-5 Miata—and they're all perfectly acceptable choices. But they're just too... predictable. Show up at a at Cars & Coffee in a lightly modded GTI, and you're just a face in the crowd. Unless your Miata has a Hellcat V8 under the hood, it's just another Miata, and no one cares about a Ford Mustang unless it's got a Shelby badge.

Want to stand out, then? Start with an off-beat automobile. And if buying an under-appreciated car means finding a barren aftermarket, well that's where we come to your rescue with this handy roadmap to the less-explored territory of today's modifiable—though very attainable—performance cars.

In order to make The Drive's list of the top easily-modified first cars, a vehicle needs to hit these three criteria:

We identified 10 cars that fit the above criteria. Each hit the sweet spot of being volume cars and not yet uncommon finds, are old enough to be cheap, and weren't popular enough to be bought (and crashed) by people who treat the Monster Energy logo the way new money treats Louis Vuitton. And most importantly, each one has a respectable amount of aftermarket support, and some are ideal platforms for engine swaps.

Some call the Toyota MR2 Spyder the "poor man's Boxster," owing to their similar styling, but don't let the Porsche-lite looks fool you: The MR2 Spyder is possibly the meanest sports car on the list. Its mid-mounted engine (behind the driver, but in front of the rear axle) makes it exceptionally agile, though as a consequence it's possibly the trickiest car on this list to drive to its potential, and few young drivers have what it takes to handle a knife-edged, mid-engined sports car.

Those responsible enough to own an MR2 Spyder will enjoy a helpful community, bountiful aftermarket support, and some engine swap potential. Owners commonly trade out the car's factory 1.8-liter, 138-horsepower 1ZZ-FED engine for the brawnier, 187-horsepower 2ZZ-GE, effectively turning the MR2 Spyder into a budget Lotus Elise.

Note that early MR2 Spyders are known to clog their pre-cats, which can be an expensive job if not already performed. Avoid cars with six-speed automated manuals, which are known to be dogs—stick with the five-speed manuals.

As a result of GM shuttering Pontiac in 2010, the historic brand has faded from the public's collective memory, despite most of its final products receiving critical acclaim. One such case is the Solstice, which was a front-engined, rear-wheel-drive roadster built on GM's Kappa platform, which has been likened by its fans to that of a shrunken Corvette. Roof options consist of convertibles like the car pictured above, or a rare targa roof offered during the car's final two model years.

Manual and automatic transmissions are available, as are naturally-aspirated and turbocharged engines, the latter in the relatively rare GXP variant. Swapping in the GXP's turbocharged engine can be done, though there are also shops out there building LS V8 Solstices, so the sky's the limit to what you can do with a Solstice (no pun intended—the Solstice had a prettier, Saturn-badged sibling called the Sky, but it's much harder to find a cheap example).

Sold elsewhere as the Toyota Altezza, the first generation of Lexus IS was a sports sedan developed under the wing of racing driver turned engineer Nobuaki Katayama, who influenced the acclaimed AE86 generation of Corolla. It was a platform Katayama was rumored to have designed with modification in mind, and that comes through in the IS300's architecture: engine up front, driven wheels out back.

IS300s sold in the US came exclusively equipped with the 2JZ-GE inline six, whose turbocharged 2JZ-GTE sibling was made famous by a certain 2001 Hollywood blockbuster. It was paired with either a five-speed manual or automatic transmission (only the latter on rare SportCross wagon variants). Swapping isn't inherently necessary to have fun with an IS300; its 217 horses are more than enough for a novice driver.

The most recent rotary-powered sports car built by Mazda, the RX-8 was lauded on its debut for its sharp handling, rev-happy rotary engine, and quirky, rear-hinged "suicide" back doors. 238 horsepower from its front-mid-mounted "Renesis" rotary engine is a number for which some modern sports cars still ache, and is more than enough to get you into some oversteer-y trouble. As a compelling platform for modification, the aftermarket can provide almost anything imaginable for RX-8s, from coilover suspension to turbo kits and engine swaps.

Young buyers should take warning that the Wankel rotary engines used in Mazda's RX-series sports cars are notoriously finicky about how they're operated. They consume some oil as part of normal combustion (some owners mix oil into their gas for better reliability), and as a result may struggle to pass emissions in some states, especially if modified. Rotaries are prone to flooding in certain conditions and should be brought to operating temperature (some even say redlined) every time they're started.

Due diligence should be done when shopping for an RX-8. Look for examples sold by Mazda and rotary geeks, not by traditionally trustworthy retirees, who may be unaware they're burning through their car's apex seals.

The first-generation "B5" A4 attempted to challenge the E36-generation BMW 3 Series, even though it lacked the Bimmer's performance hallmark: rear-wheel drive. Front-wheel drive was standard, with Audi's Quattro all-wheel drive offered as an option—though the B5 A4 had other things going for it.

The A4 launched with a 2.8-liter, 172-horsepower V6, but for the car's sophomore year, Audi added a 1.8-liter, turbocharged four-cylinder engine with five valves per cylinder. That allowed the four-banger to make an impressive (for the day) 150 horses, with a robust torque curve. Its V6 later got five-valve heads, boosting output to 190 horsepower, while the four-cylinder was upgraded to 170 horsepower for the 2001 model year.

Audi also offered a sportier S4 version, with a 2.7-liter twin-turbo V6 making 250 horsepower, though that engine has proven less reliable than the standard A4 engines. As a low-volume performance model, the S4 will likely be harder to find in both affordable and unmolested condition. The A4, in contrast, offers an affordable jumping-off point for modification.

With Integra prices pushing into insane territory, its successor is looking more attractive by the day. The Acura RSX was actually badged as a Honda Integra in Japan and Australia, and it carried the 1990s performance icon's spirit onward in the United States. The Type-S model's 2.0-liter, four-cylinder K20A2 engine produced 200 horsepower (later upgraded to 210 horsepower), and Acura even raced the RSX in the SCCA World Challenge (now the Blancpain GT World Challenge America).

Nevertheless, the RSX never made quite the same impression on car enthusiasts as the Integra did. That means this last bastion of old school Acura/Honda goodness will likely continue to be a performance bargain for years to come.

Infiniti has been trying to match German luxury brands for decades, and with the G35, it briefly did. Introduced for the 2003 model year as both a coupe and sedan, the G35 was a legitimate rival to the benchmark BMW 3-series. This Infiniti received plaudits from automotive journalists, of which today's Q50 and Q60 can only dream.

Crucial to the G35's success (and its value as a platform for modification today) was good DNA: the G35 rides on same the FM platform as parent company Nissan's 350Z sports car. "FM" stands for "front-midship," meaning the engine is shoved further back in the chassis for better weight distribution. Said engine is the 3.5-liter VQ-series V6, meaning aftermarket support is fairly strong. Rear-wheel-drive was the model's most common drivetrain, though all-wheel-drive can be found on some sedans, denoted by Infiniti as the G35X. Available body styles include sedans and coupes, though the latter only for 2007, the G35's final model year.

The Z33 generation of Nissan's Z-car was destined to make this list. The 350Z is a classic rear-wheel-drive sports car designed to be affordable from the start, with a production run long enough (from model years 2002 to 2008) to seed the used market with plenty of cheap, yet serviceable examples.

Launched at the height of the Fast and Furious-fed tuner craze, aftermarket support for the Z33 has always been robust. That means plenty of options for upgrading the 3.5-liter, VQ-series V6 engine, which made 287 horsepower in early cars, but got a bump to 306 for the 2007 model year (a grittier Nismo model joined the lineup that year as well). If all else fails, the 350Z's engine bay is also big enough to accept a General Motors LS V8 swap.

The Firebird nameplate has been dead for 17 years, meaning many people reading this list were born after the model's discontinuation, and won't know it to be the fraternal twin of the catfish-faced Chevrolet Camaro, both of which shared the General Motors "F-body" platform.

Aside from their chassis, the Camaro and Firebird shared a series of transmissions, from four-speed automatics to five- and six-speed manuals. All engines (except the early 3.4-liter V6) are easily modifiable, from the stout, Buick-sourced 3.8-liter V6 to a pair of 5.7-liter V8s of slightly differing specification; as small-block Chevrolet V8s, they have some of the best parts availability and aftermarket support in the business. Between its engines and its superb handling courtesy of the double-wishbone suspension, aspiring racers of any kind needn't look elsewhere for cheaper ways to go fast today.

The E46 generation of the BMW 3 Series was the rightful darling of car magazines in the early 2000s. It possessed some of the best driving dynamics outside the sports car realm, and was available in myriad body styles—sedan, wagon, coupe, convertible—to boot. As the apotheosis of the performance philosophy that started with the BMW 2002, this car was so good that unflattering comparisons to newer models have become a bit of a problem for BMW.

As such, the E46 a desirable car for modification (and racing). This generation of 3 Series has gotten plenty of attention from the aftermarket and its supporting tuners, although that means you'll have to choose your car wisely. The vaunted E46 M3, for example, isn't really an option for buyers on a budget—but lower-level models offer the same basic chassis, and many options for upgrades.