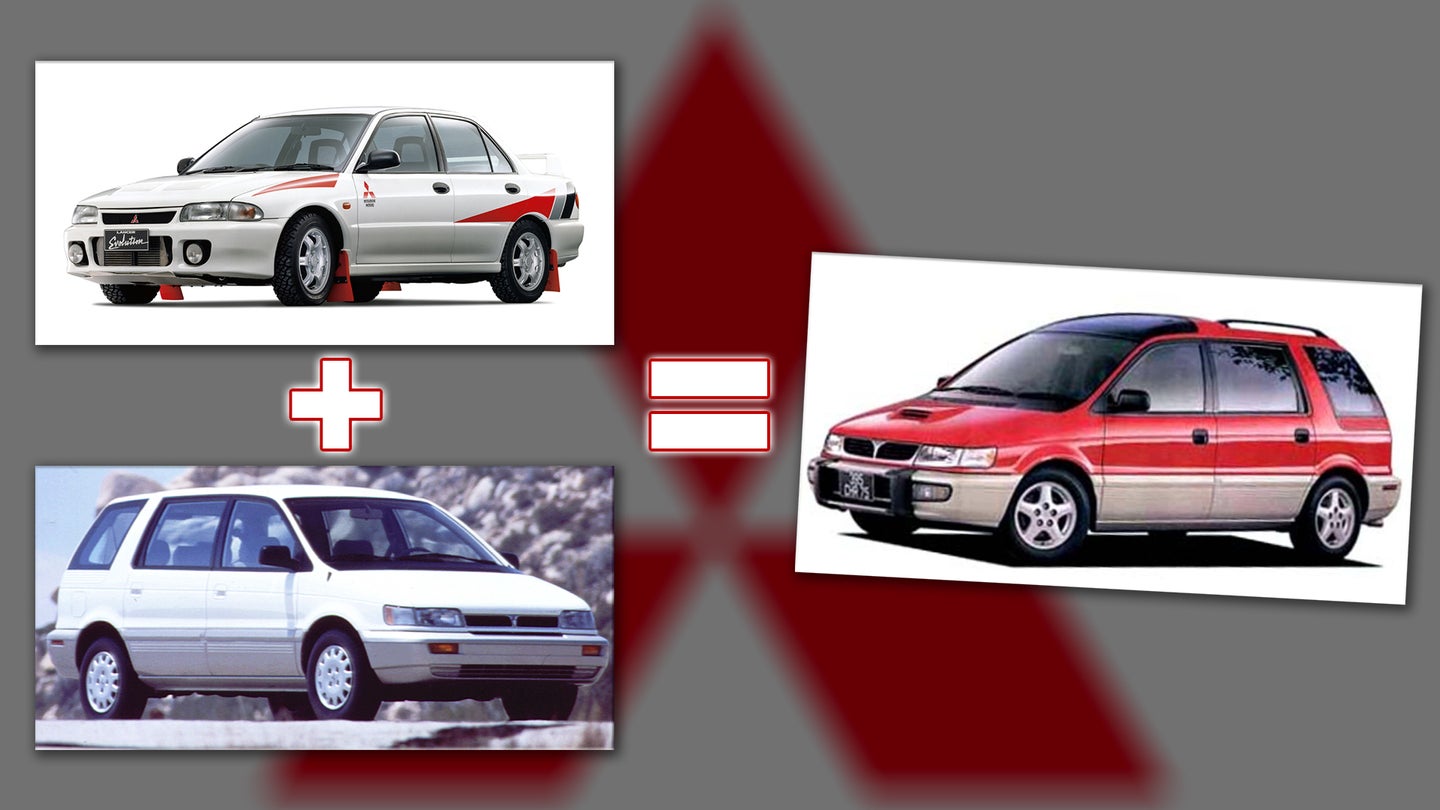 The late Bubble Era in Japan was an time of odd street fashion, angsty anime, ostentatious displays of wealth, and a domestic car market that made Lamborghini’s Countach Periscopio look monotonous. Cars like the Autozam AZ-1, Eunos Cosmo, and Yamaha OX-9911 racer grew from this world. As did the Mitsubishi Chariot Resort Runner GT, a Lancer Evolution I-based minivan finally set to age out of America's restrictive 25-year import ban in 2020.

At its debut in 1983, the Chariot was nothing more than a conventional minivan designed for utilitarian needs such as child hauling, soccer practice, gardening projects, and all manner of family road trips. A momentary blip of a car on the international automotive radar. But to its credit, the Chariot saw enviable profits as Mitsubishi licensed it out as the Dodge/Plymouth Colt Vista and the Eagle Vista Wagon in the U.S. and Canada. The second generation, launched in 1991, saw even more rebadged versions like the Hyundai Santamo in South Korea and the Guangtong GTQ5020XZH (yes, really) in China.

Yet while the rest of the world ate up the second-gen's Chariot's plain-Jane trim levels, Mitsubishi's domestic market engineers took a different approach and ushered in the release of the 1995-1997 Chariot Resort Runner GT in Japan.

Stoned from a limitless-looking Japanese economy—the market had already cratered by the time the Resort Runner GT came out in 1995—and likely a few sake-fueled nights, Mitsubishi concluded that what it needed was a hot van. There was clearly only a single path to follow, swapping the Chariot’s stock drivetrain out for the fierier components of the legendary gravel-demolishing, forest-stomping Lancer Evolution I.

The project was absurd from its onset, but Mitsubishi’s engineers apparently believed that by detuning the Lancer Evolution’s 4G63 engine from 244 to 226 horsepower, the Chariot Resort Runner GT would seem...more respectable. We’re not sure that worked as like its Evo brethren, the Chariot Resort Runner GT used a 5-speed manual transmission to power all four wheels via Mitsubishi’s “Dynamic Four” all-wheel drive system. Laughing in the face of sensibility, the engineers also threw in the Lancer Evolution’s center differential, four-wheel steering, independent suspension, and four-wheel ABS.

Though extracted from the freshly debuted Lancer Evolution I, the Chariot Resort Runner GT’s systems were first pioneered in the brand’s Galant VR-4 and only later used to dominate the World Rally Championship. Ultimately, the same engineering that Japanese customers could find in a minivan netted Mitsubishi four consecutive driver’s championships and countless rally wins. And from that success, and popularity in the video game Gran Turismo, Mitsubishi clinched the Lancer Evolution’s iconic enthusiast status and the reason we're talking about the Chariot Resort Runner GT today.

But more practically, these modifications meant that the Chariot Resort Runner GT hit 60 mph in under seven seconds and sprinted to a quarter mile in just 15.1 seconds. That’s only a tick off the quoted 14-second quarter-mile by the Nissan R32 Skyline. More impressive was that after it clipped the quarter-mile, the Mitsubishi Chariot Resort Runner GT could theoretically hit a top speed of nearly 140 mph. That still seems absurd for a minivan today.

For visual differentiation, the minivan was fitted with a panoramic bubble-top sunroof, a front bumper with overbite-like protrusions, a functional hood scoop, and five-lug axles with wheels pulled directly from the Lancer Evolution. Apart from the Mitsubishi Chariot Resort Runner GT’s five-speed manual transmission—an automatic was offered, though horsepower decreased to 217—and front Recaro bucket seats, the minivan was bone-stock inside and even kept its three-row setup to accommodate up to seven passengers.

When new, the Mitsubishi Chariot Resort Runner GT cost customers 2,669,000 yen, which roughly translates to $24,995 (or $42,000 today). At the time, that was less than its Lancer Evolution I sibling, but more than the standard $18,600 Chariot. As for used examples, few last on the market for more than a day or two before being snatched away by an enthusiast in the know. One was recently purchased for $4,700 and shipped to Canada from Japan. Beginning next year, anyone in the U.S. can attempt a similar feat as the first Resort Runner GTs tiptoe past America's 25-year import ban.

What the Chariot Resort Runner GT also shows is that an Evolution-inspired Mitsubishi doesn’t necessarily have to be a Lancer. In that respect, Mitsubishi’s long-rumored Evolution crossover wouldn’t exactly violate its own history. Sorry, purists.

With such a weird birth, and the heart of one of Japan’s most iconic enthusiast machines powering it, the Mitsubishi Chariot Resort Runner GT is poised to become a future JDM classic. And indeed, the market seems primed as Japanese minivans have seen their popularity rise in recent years with Mitsubishi’s own Delica, and Montero/Pajero, Toyota’s Land Cruiser, Hiace Super, Surf, and Hilux, as well as Nissan’s Homy and the Daihatsu Atrai all seeing double-digit prices on the used import market. All that’s left are enthusiasts realizing what the Mitsubishi Chariot Resort Runner GT is and this 1990s oddball is going to skyrocket in value.

Remember, you heard it here first.

Tell us what you think of the weird history of Mitsubishi’s Lancer Evolution-based Chariot Resort Runner GT minivan. Do you love it? Hate it? Sound off in the comments below.