A Love Letter to the Forgotten Mitsubishi Expo, the Best Van-Wagon-Thing of the ’90s 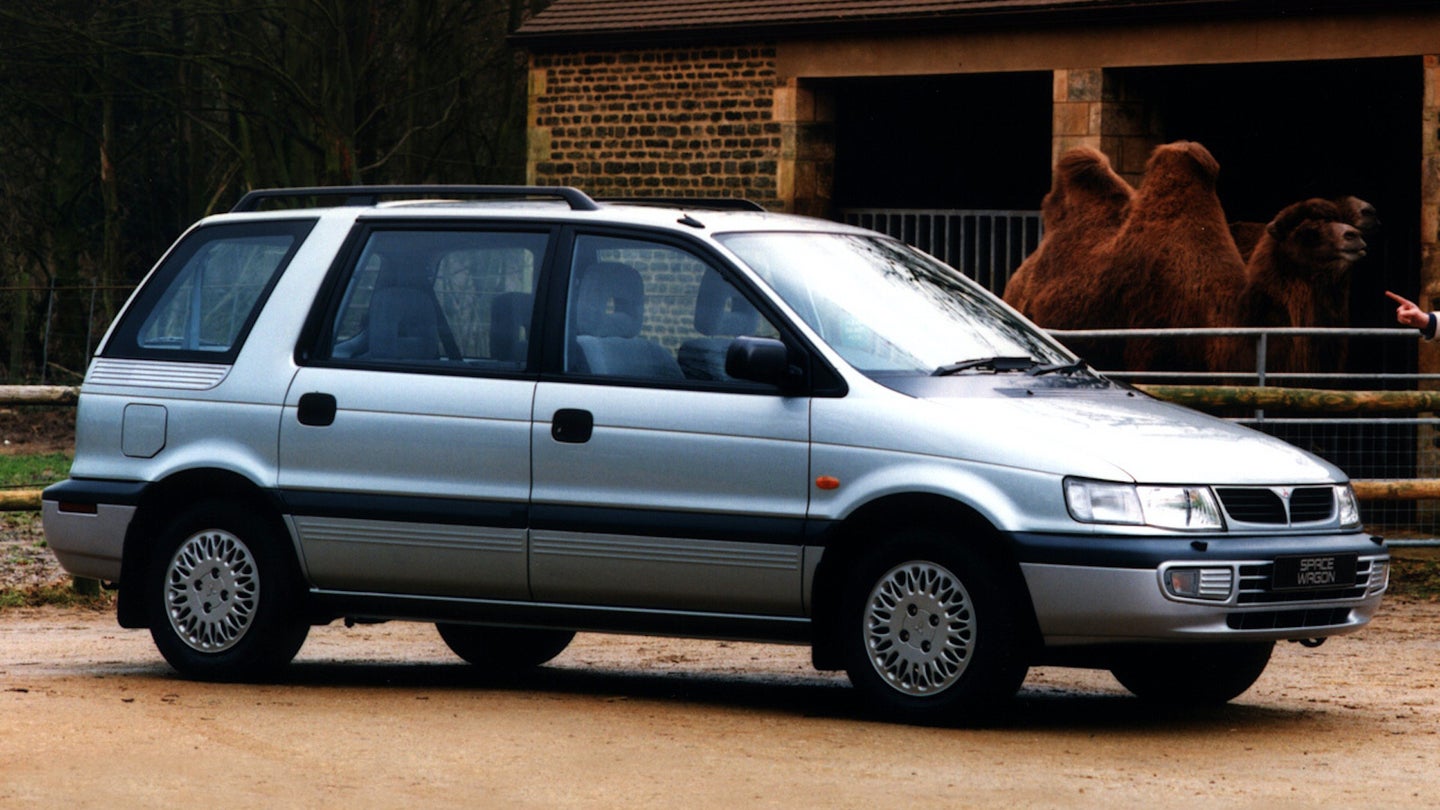 The 1990s were without a doubt Mitsubishi's golden age. It had the Eclipse, the Galant, Pajero, 3000GT, Delica, Lancer Evolution; an array of era icons that people lust after to this day. But not all Mitsubishi's creations in the '90s were hits. For several years, this Japanese underdog also hawked a pair of family-friendly models that never made much of a splash in most of the world. In America, we knew them as the Expo and Expo LRV, two of the weirdest vehicles Mitsubishi ever sold.

Introduced in 1991, the Expo and LRV were fraternal twins built on the third-gen Lancer/Mirage platform with similar styling, but with different wheelbases, and equally hard-to-define body styles. The smaller, demi-hatchback LRV was easily the stranger of the two, with a single door on the driver's side, and two on the passengers', the rear of which was a minivan-style sliding door. Think a Hyundai Veloster, but by Diamond Star Motors; that Chrysler-Mitsubishi partnership that gave us cars like the Eagle Talon, Chrysler Conquest, and of course, captive import LRVs like the Eagle Summit Wagon and Plymouth Colt Vista. Mitsubishi did some nameplate fudgery of its own, too; the LRV's name in much of the world was Space Runner, like some '80s arcade cabinet. And in Japan, it was simply RVR, stylized as ЯVR.

There, the LRV also got a little-known performance trim called the Hyper Sports R, a sort of Evo-lite package with a 2.0-liter 4G63 turbo engine, an optional five-speed manual, and all-wheel drive. Similar was available for the ЯVR's sleepier, seven-seat sister model, the Chariot, whose ultimate model in its home market was called the Chariot Resort Runner GT. Lesser trims were known by just as broad a range of names, from Expo here in America, to Nimbus in Australia, Space Wagon in Europe, and even Hyundai Santamo; apparently a portmanteau of safety and talented motor.

Shaped like a minivan but built sans sliding doors, the Expo blurred the line between MPVs and wagons. Mitsubishi seemed to consider it more the latter, hence that Space Wagon (HELL YEAH!) name, but the American public treated it like today's car buyers treated the former. During its stint in the States, the LWB Expo according to CarSalesBase sold just 27,522 units, scarcely a third of what the abbreviated LRV managed across the Eagle, Mitsubishi, and Plymouth brands. Even their combined sales totaled barely half as many as the Dodge Grand Caravan managed in its single weakest year of the '90s, when it still moved almost 206,000 units.

If I had to guess what about the Expo turned off Americans, it's probably not that it was a line-blurring wagon with a high roof. That wasn't a problem for the later, more SUV-like Subaru Forester, after all. No, the Expos' problem was probably that they looked too much like dad-jeans machinery, even though that frumpiness gave them some of their greatest strengths. Visibility was superb all-around, and interior space is exceptional for something about the size of today's Mazda CX-5. Minus that tiny third row, of course, which barely had space for two kids (though inexplicably, access to as many as eight cupholders). Its handling was also on the odd side, with a galactic turning circle and a tendency toward body roll, but it overall drove and rode well for a minivan.

All this I feel confident asserting having grown up in the back (and later front) seat of a 1995 Expo, one an older sister of mine nicknamed "Gertrude." I suspect she got this name from the vibrating idle thrum of its single-cam 2.4-liter, which to my knowledge has been cracked open just once in 280,000 miles. The same can't be said for its four-speed automatic transmissions, which have consistently widowed it every 60,000 miles or so. As mechanical flaws go, it's a serious one, but it's not one that can affect my overwhelmingly positive opinion of the Mitsubishi Expo.

Maybe I like it for the puzzled looks it produces when I drive it into car meets. Maybe I like it for the ease I feel inside, no doubt imparted by memories of my mother at the wheel. Maybe it's even the absurd allegorical significance I derive from its JDM name, Chariot, which to me evokes the Vangelis-scored film that shaped my and my brother's psyche, which in turn calls back to a William Blake poem that encapsulates my worldview. Maybe it's all these things, maybe it's none of them and I'm rationalizing something silly. Whatever it is, it compels me to keep Gertrude on the road for as many years as I can. Hopefully, those years will extend past May 22, 2023; the date on its vintage Colorado plate. I think I'll have to throw it a party that day. Cake for anyone who shows up.