This low, wide, and mean Porsche has ditched its old aircooled heart for a 1985 Corvette power plant with even more mods to come. 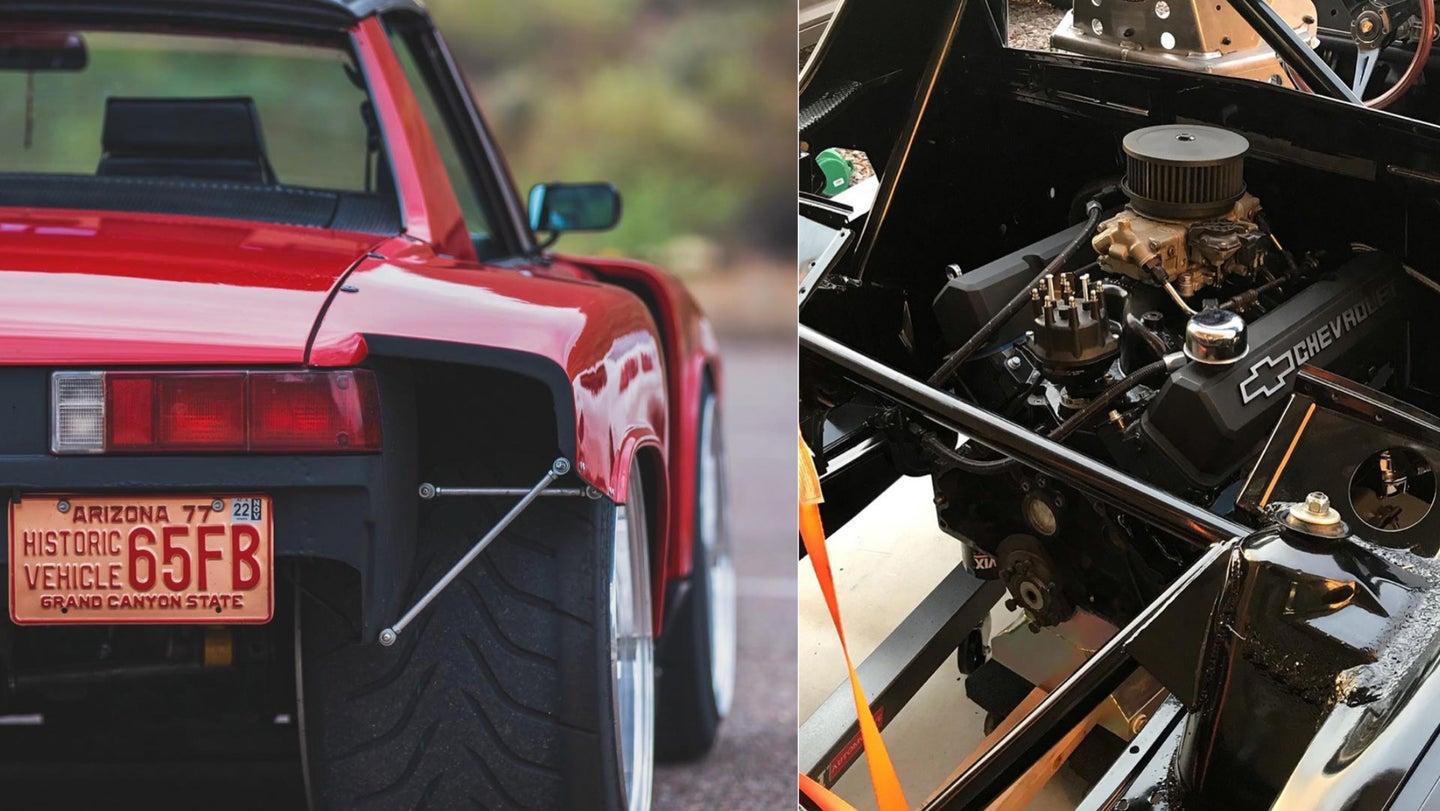 At a time when aircooled Porsches of all kinds are becoming pricier and harder to find, it warms my heart to see one that's been modified to be insanely different than Volkswagen and Porsche intended a 914 to be. Trevor Ott's incredible widebody 1973 Porsche 914 is just as insane under those big fender flares as it looks from the outside, bearing the engine of a 1985 Chevy Corvette.

What was once Porsche's humblest car—so much so that it wore a "VW by Porsche" badge in its home country—has been transformed into a wild little monster, complete with an air-hungry front end that's been opened up to keep the Chevrolet V8 in the middle cool. Vents over the front wheels can also be found and wide, boxed-out rear fenders with massive air intakes complete an absurdly aggressive aesthetic.

It's a wonderful sight to behold, and the fun part is, Ott isn't done with it yet. He told The Drive that he became interested in 914s after getting out of the army and doing an apprentice job for the Dyno-Comp performance shop. A guy around the corner from his workplace built 914s into race cars, and these were so cool that Ott started looking for a 914 of his own.

When he found a rust-free example that he liked in Las Vegas, it had already been V8 swapped and it came with the widebody kit, but it wasn't running. Even worse than that, he was too late—the car had been sold to someone in California. Fortunately for Ott, the buyer got the V8 engine running and installed the body kit, but he became frustrated with it and ultimately sold the car. This time around, Ott was ready and right on time to scoop up the unusual P-car.

It wasn't in the best shape, though.

"I went and bought it and drove it 12 hours home," Ott told The Drive on Instagram. "Broke down a couple times and blew the transmission a block away from home, haha."

Ott got to work making this wide-fendered 914 the beast he always wanted from there, swapping in a new V8 out of a 1985 Chevrolet Corvette, then adding new 18-inch deep-dish BBS wheels shod with Toyo R888 tires and fresh paint. It looks like a beast, but it's about to get even better.

About six months ago, Ott started taking the whole car apart again. So far, he's posted photos of a pretty intense roll cage that's gone in the car, and a wide-open but nicely reinforced trunk/engine area, but that's about it for now. Ott promised us that it would be "100 percent more insane under the skin but look similar to what it used to look like." For a car that already has well over twice the amount of horsepower it came with, that's saying something.

You can keep up with the progress of our new favorite heretical 914 build on Ott's Instagram here.

We find out how many hours – and how much money – it takes to build a custom Toyota Land Cruiser.