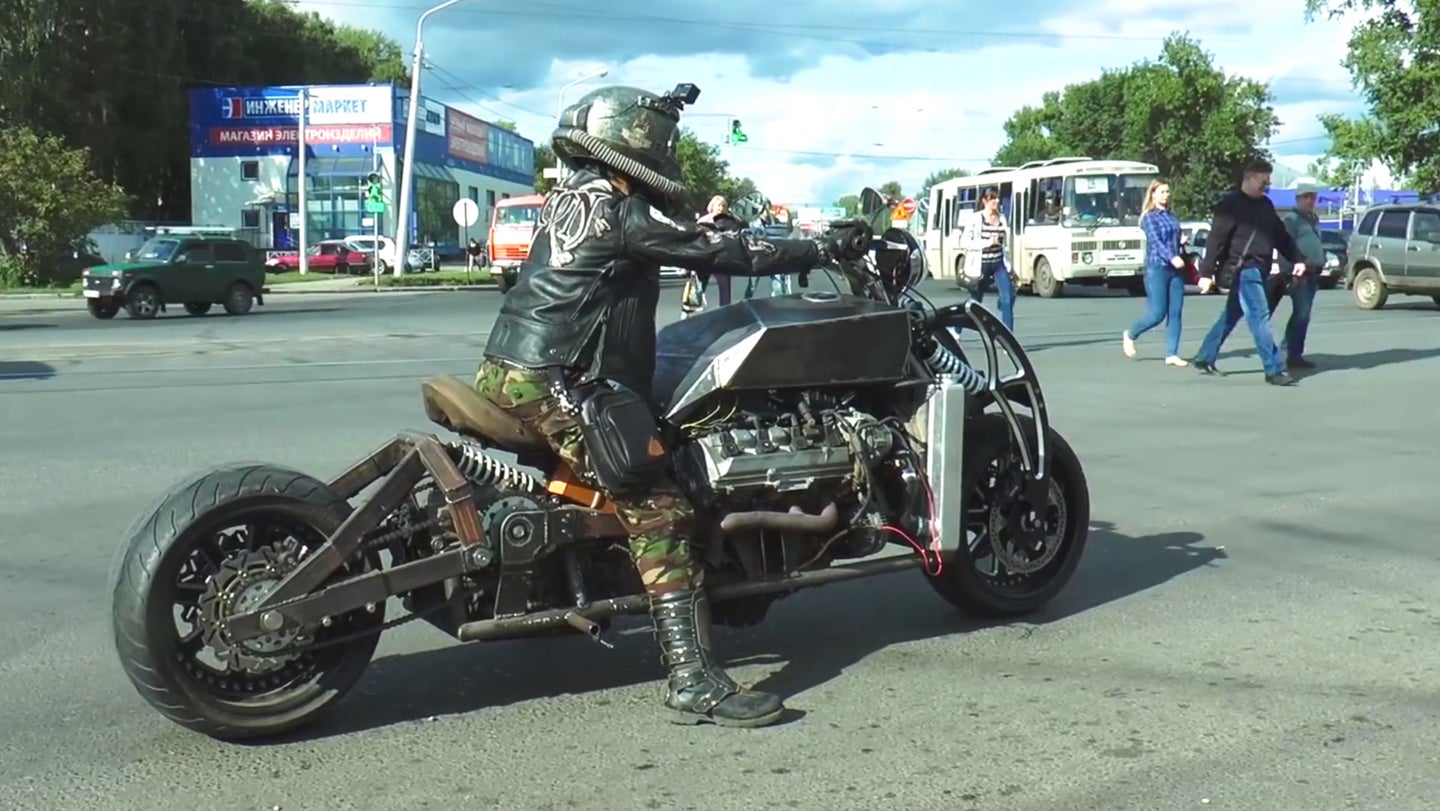 Any time you figure out how to strap yourself to a giant V8 engine on two wheels, you have earned my undying respect, and a little bit of fear. Making it look like an extra from 2Pac's California Love

Meet Gangrena, a custom motorcycle built with a massive 300-horsepower Lexus 3UZ-FE V8 engine at its heart. It's the personal project of Yekaterinburg, Russia, builder Artem Boldyrev, and it's proof that Russia really deserves to have its own version of the Wasteland Weekend.

This post-apocalyptic rat bike isn't just pretty (or terrifying, depending on your opinion of it)—it's functional, too! The Mad Max-worthy custom gas tank is large enough to let the big V8 travel longer distances, notes Hi Consumption. The build was even kept under three meters in length so it would be road-legal, and Boldyrev made a Fallout-inspired helmet to complete the look and protect his head.

To put all that power to the ground, the bike repurposed the front automatic transmission from an all-wheel-drive Toyota Mark II Blit, which sent power to the gigantic 360-millimeter-wide rear wheel using a meaty two-chain torque system. Using only one chain would have potentially twisted the bike, Boldyrev explained to Proural.

The rear tire itself had to be ordered from the United States. Brakes came from a BMW, the front radiator was a Mopar product, and the handlebars and headlight both came from a Harley-Davidson, notes @thebikephoto on Instagram.

Boldyrev told Proural that he got the idea from an American build that also repurposed a big V8 into a custom bike. Yet Boldyrev figured he could make something more powerful with his, so he found the big Lexus powerplant and started building his dream bike around it. The bike itself weighs around 1,323 pounds, which should be easy enough to move with 300 hp.

Should you take over as the new leader of the War Boys, Boldyrev claims it's even fairly easy to ride. For right now, though, it's a delightful work in progress, as @thebikephoto notes that changes to Gangrena's forks, radiator, and base will all get tweaked just a bit in the near future.

This Diesel AWD Motorcycle is a Two-Wheeled Apocalyptic Frankenstein

This Gorgeous Bespoke Motorcycle Will Set You Back Over $50,000