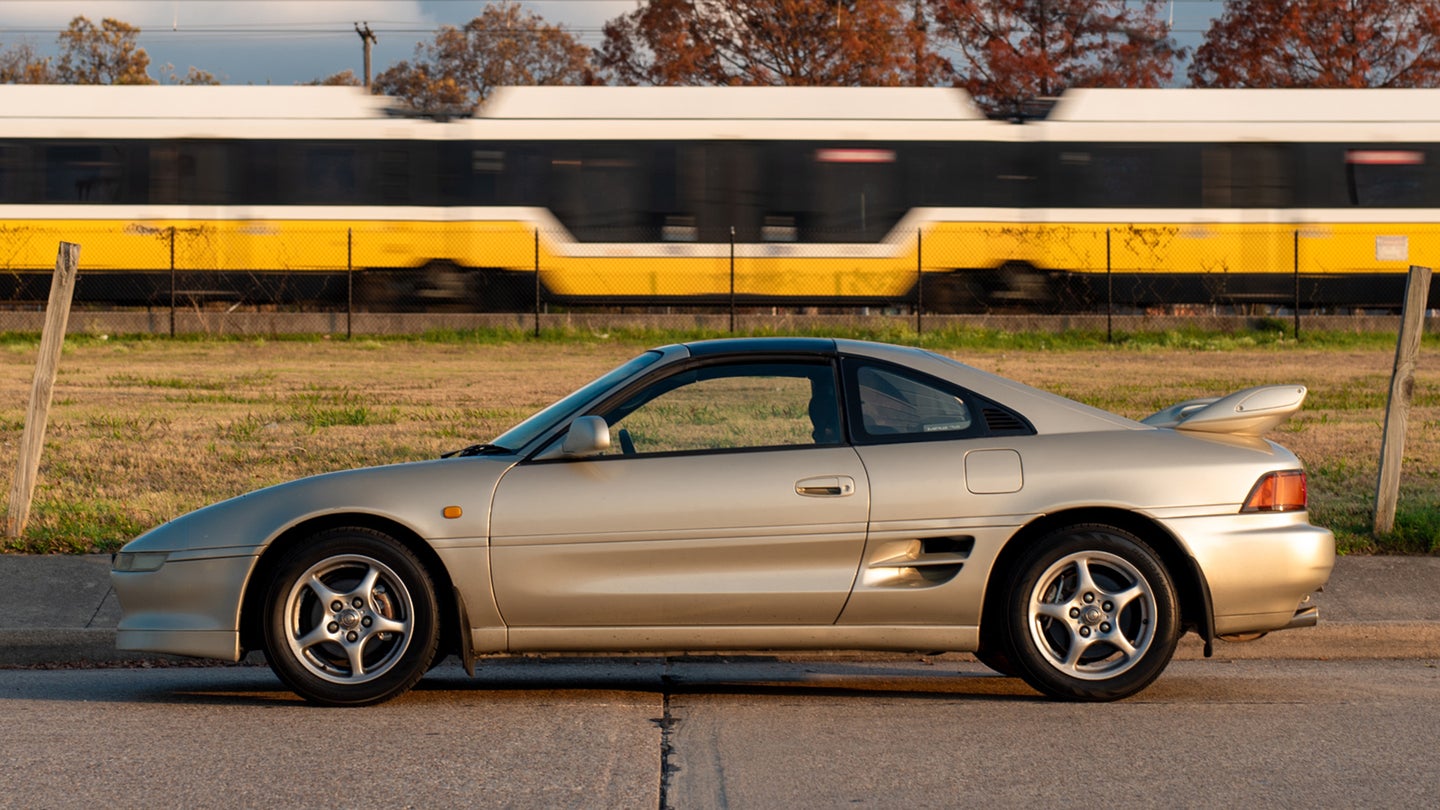 What is the concept of divinity to you? To me, for most of my life, it was a nebulous concept of the Father, the Son, and the Holy Spirit. They—or He, depending on your specific beliefs—are divine because He has created the world and the wonders in it. All credit for the joys of existence belongs solely to God, and our happiness is all credited directly to Him.

That’s what I thought, anyway, until I got into this 1990s Toyota MR2.

The MR2 (so-named to be an acronym for Midship Runabout for Two, according to Toyota) was off the bat one of the strangest cars the massive Japanese company ever produced. Its mid-engined layout—typically a design reserved for only the most focused and expensive sports cars—in an affordable, reliable format was unique not only for Japanese manufacturers but also for the car market as a whole, barring only Pontiac’s rival Fiero. No longer was having an engine belting its soundtrack out from directly behind the driver the sole domain of those with the coin to buy a Testarossa or a Countach.

Toyota continually refined the first-generation MR2, known by the chassis code “AW11”, throughout its run, adding a supercharger and more options until it was discontinued in 1989. In 1991, Toyota completely redesigned the platform with the “SW20” chassis—the one I found myself behind the wheel of. The SW20 was a leap forward in all regards: The MR2 name stayed the same, but the car got larger, more aerodynamic, more powerful, and more technically challenging—and rewarding—at the limit. In 1995, as the Japanese bubble economy imploded, the MR2 marque disappeared from American shores and wouldn’t reappear again until the vastly less powerful, less graceful MR2 Spyder was introduced in 2000.

So the SW20 is arguably the peak of all mid-engined Toyota offerings—perhaps the peak of all its offerings behind only the Lexus LFA, a car so bespoke it routinely sells for nearly a million dollars. And this svelte golden example is a rare late '90s JDM-specification G-Limited—possibly the peak of the SW20s themselves. Toyota had five revisions of the second generation MR2 throughout its lifespan. The final two iterations were sold solely in Japan, and this specific car is the fifth and final revision, with every possible chassis tune and suspension tweak ever offered on the platform nestled in its gilded sheet metal. Peer closer, though, and the best part of the G-Limited lurks behind the slats of its ventilated engine cover. Tucked under the panoramic rear window hides the pinnacle of Toyota’s naturally aspirated four-cylinder motors, the BEAMS 3S-GE.

Toyota’s best work has always been in collaboration with Yamaha, and the BEAMS motor (officially, BEAMS stands for Breakthrough Engine with Advanced Mechanism System) the two companies developed together is no exception. It has an incredibly smooth-revving and flat torque curve, provided by its variable valve timing and well-designed, high-flow head. Even more impressive, the 2.0-liter powerhouse puts out 200 horsepower—that’s a staggering naturally aspirated 100 hp per liter of displacement in the late '90s, which at the time was the stomping grounds of 911s and F50s, not daily driven Toyotas.

But regardless of what motor is spec’d within, this car is gorgeous. It has the unmistakable silhouette of a serious sports car that only a mid-engined vehicle can offer without falling too deeply into aggressiveness. Even its most machismo traits are installed for a reason: the wing at the rear—a G-Limited special option—is adjustable for variable downforce and fully functional, and the lower-grille fog lamps steer with the front wheels. Despite these clearly sporty touches, in this oh-so-'90s gold, it looks mature, like it could be equally at home in the valet lot and on the autocross tech line. In an era where cars skew towards the generically subdued (to prove their "maturity") or the comedically angry (to demonstrate their raw sporty prowess), the MR2 feels like the physical manifestation of a bygone time when fun was not considered immature.

This fun-loving ethos is more than skin-deep: the MR2 is downright joyful in motion. As I explored its capabilities, I was in awe that a mass-produced Toyota could offer an experience this well-honed. The steering rack on this car is the sharpest I’ve felt this side of an air-cooled 911. It transmits road conditions under its wheels without the need for punitively harsh suspension to rattle occupants to early-onset arthritis, and the throttle response is phenomenal. The whole package communicates its exact demeanor at any given moment with perfect fluency.

In the MR2, this communication is crucial. Perhaps the best-known trait of the SW20 chassis is its infamous tendency to "snap oversteer." Snap oversteer, simply put, is when oversteer is induced by letting off the throttle mid-corner. The weight balance of the car shifts forward as it decelerates, and the mid-engined mass of the car causes the whole thing to whip itself rear-end-first into the nearest tree. This was a common trait in U.S.-spec turbo MR2s; the sudden surge of torque as boost pressure reached its apex would cause drivers to panic and let off the gas mid-corner—and then spin into the nearest hedge before they’d even realized their mistake.

But this is where the magic of the even-keeled BEAMS 2.0-liter shines through.

As I pushed the MR2 harder and harder into any corner at my disposal, no matter where in the rev range I found myself, it stayed incredibly easy to control in turns. In the rare moments that my hubris would overtake me and I found myself needing to let out of the gas mid-corner, a gradual deceleration would do the trick. Because the powerband is so flat and I didn’t have to worry about losing boost pressure—and torque—suddenly, it was incredibly easy to find the limits and hold the car at them, pointing the nose with gentle throttle work.

In Touch With the Divine

But even more remarkable than the G-Limited MR2’s composure at the limit is just how much fun it is… driving around. The flat torque curve that let me carefully and methodically approach the limits of traction also means that every dashed-yellow-line pass is a raucous time; accelerating from a stoplight feels like getting the chance to launch an F1 car from a standing start. The transmission is by no means a work of art, but the five-speed combined with the proudly trumpeted soundtrack of the 3S-GE six inches behind your ears makes every single stab at the gas an experience.

Taking off the T-tops and going for a simple cruise around town with a beloved friend in the passenger seat, the MR2 allowed me to transcend the material realities of my evening. My test circuit for this car was the bland highways of Dallas, Texas, but the roads didn’t matter. In this machine, even the most mundane stretches of pavement, with the wind in my hair and the feel of perfect control through the steering wheel, made me realize this car contains the spark of divinity.

If an LFA in all its might and engineering prowess is analogous to the Christian monotheism of my childhood, the MR2, in its affordable and everyman format, is the representation of modernist pantheism. This car effortlessly provides joy in situations that should be joyless; it transforms a single good off-ramp to an event permanently etched into my mind because of how much raucous fun I had driving down it.

It possesses something that does not show up on the spec sheets and won’t be explained by trying to characterize driving traits as an unbiased reviewer. Objectively, nothing about it should stand out this sharply in my mind. It has 200 hp—certainly respectable, but also 100 less than a new V6 Camry. It’s fairly light for the modern era at around 2,800 pounds, but in the '90s, that was average. The five-speed feels like a '90s cable-driven Toyota transmission, which is not a compliment.

And yet, I have never missed a test car this bad in my life; I truly wonder if anything will ever make driving around town feel so spiritual. Simply put, it’s impossible to not be just a bit happier when you’re driving this car because it has that divine spark. It feels soulful.

This car’s ethos simply means it believes every little opportunity for a brief smile can be something more. It acknowledges the weakness of the material world—whether that’s solely 200 HP and an admittedly average transmission, or the imperfections we face as human beings who might brake a little late, push a little too hard—and it converts them into strengths by embracing its limits and encouraging you to find them; surpass them, do more than you ever thought yourself capable of, and feel liberated in the process.

I’ve driven other cars that are far more iconic or well-tuned, but the MR2 was unique in that it made me happier to be alive and more special than I’d ever felt before, every moment I was behind the wheel. What further proof of the divine could I ask for?

This Electrified Toyota Concept Sure Seems like a New MR2