2021 Aston Martin DBX Review: Classic Luxury in a Modern SUV, for Better and for Worse

The DBX drives great but is curiously lacking in advanced driver assistance systems that make for true modern luxury. 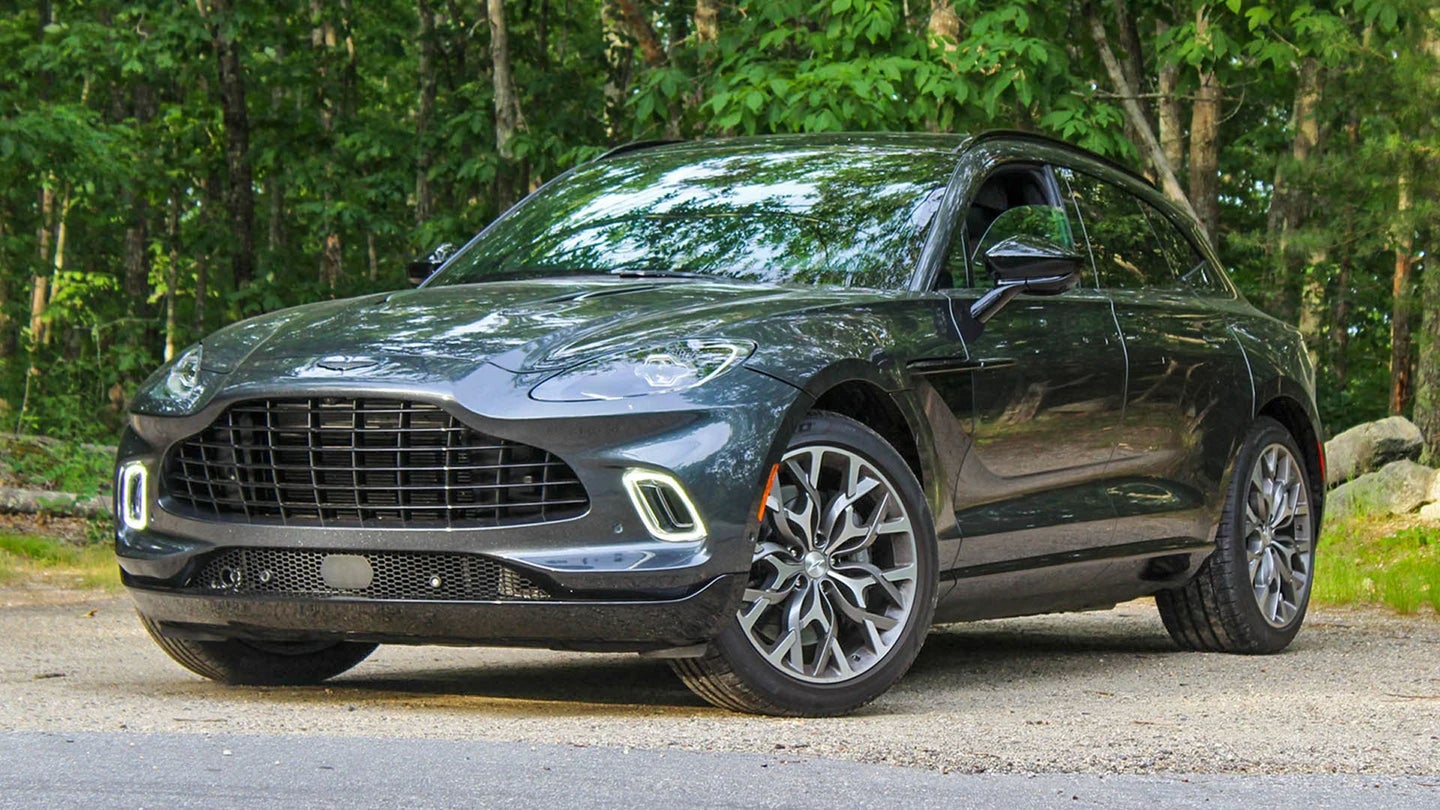 Luxury cars, to somebody like me who was born just before the new millennia, have always been defined by advanced technology. The most cutting-edge stuff that's not found on pedestrian cars and makes you feel like you're sitting in something from decades in the future. Electronics that make the dull parts of driving less of a chore are something I really enjoy. The 2021 Aston Martin DBX doesn't have stuff like that, but it does get the core things about being a great, powerful, grand-touring luxury car right.

Its technology isn't necessarily out of date (it's still hanging in there in ways you'll read about shortly), but that's also not what the car leans on. The DBX is decidedly old school in the way it spoils you—it looks right, performs right, feels right, and also hauls ass, which definitely doesn't hurt. Combine all of these things and you don't just get a good luxury SUV, you get what can actually be considered a real Aston Martin.

For the DBX to pull that off in an era where you can also drive down the Interstate in other cars while barely touching the steering wheel, it's impressive.

At the time of this writing, the DBX is Aston Martin's first and only SUV. As with many other traditional high-end automakers like Rolls-Royce, Bentley, and Lamborghini, Aston is diversifying its offerings a bit in order to better compete in the modern truck and SUV-focused marketplace. Some people like that, some people hate it, but as far as I'm concerned, if one of these "Super SUVs" can be well executed, I see no problem with them being sold, especially when they enable the existence of these brands' cooler offerings.

One thing that's hard to get right on vehicles like these is the exterior. Bentley's Bentayga has a few awkward angles, Lamborghini's Urus doesn't go quite far enough—heck, you can make a RAV4 look an awful lot like one—and the Rolls-Royce Cullinan looks a bit too much like a London black cab. The DBX, on the other hand, is classic Aston design translated into SUV form. Resembling more of a sleek, lifted wagon as opposed to an upright slab, it looks just so. Combine these attractive proportions with the car's excellent "Ribbon Gloss Graphite" wheels, and it's at the top of the heap aesthetically as far as opulent performance SUVs go.

The interior has much of the same Aston-ness you'd expect, and it's where the DBX hints most at its traditional luxury strength. The leather is exquisite and everywhere, the wood is doubtlessly real and features a fine satin finish, and the design of the switches, door handles, and air vents have quite clearly been considered very carefully. It all feels like it's been forged out of one massive piece of interior stuff.

This premium feel and level of detail also work well because of good ergonomics. The seats are supportive and comfortable, front and rear. The back seat also has a cozy, hunkered-down feeling to it. The infotainment feels a little outdated and is slightly tricky to navigate—it doesn't run buttery smooth or have any eye-catching graphics—but it's not annoying enough to detract from what is otherwise a great place to be, especially in mundane driving situations like the highway, or in traffic.

Once I put my foot down, that rock-solid sensation I felt in the interior translated to pretty much everything else about the DBX.

Mercedes-AMG's tried and true 4.0-liter, twin-turbo V8—one of the premier eight-cylinder engines in any car today—powers this SUV. Thanks to tiny turbochargers in the valley between its two cylinder banks, there is no appreciable turbo lag, and the torque comes on like a hydraulic ram. Load up the boost just right, and you'll be fired down the road thanks to all-wheel-drive and a smooth—if a tad lazy—nine-speed automatic transmission, also sourced from Merc. Frankly, a double-clutch would've been amazing, although perhaps a little out of place in such a large and heavy 4,940-pound vehicle that's never going to need to shift as fast as a track-focused sports car.

You can feel that weight when you're driving the DBX, but not in a bad way. What's clear is that the ride and handling were tuned very carefully, so although the mass of this thing is evident in the corners, it's also obvious that it's going to take a very long time before it runs out of grip. Having 542 horsepower also helps tone down the impression that you're driving a big chunk of luxury SUV—the car's mid-range is a force to be reckoned with.

Where the DBX really comes into its own is on rougher paved roads as well as dirt and gravel surfaces. In my review of the Hummer EV prototype, I stated it rode like an aircraft carrier. That's thanks to air suspension and big, 35-inch tires. This car, on 22-inch wheels, rides just as well, if not better. I know that sounds hard to believe, but there is some kind of genuine magic going on with the DBX's triple chamber air suspension. I want it in my car, I want it in every car, it's positively incredible. I can't say if the DBX would struggle a bit in true off-road situations,as I did not take it off-roading, but on rutted backroads or pothole-ridden Boston streets, it's sublime.

That—and driver inputs like the firm brakes, precise and weighty steering, and throttle being so good—is what really makes me hesitate to call this car a cynical cash grab. It's not a V12-powered luxury coupe, but it very clearly is a car Aston Martin made worthy of its badge. The windows are double-glazed, making the cabin absolutely silent, and the chassis is balanced very well. There are always going to be consequences of having a car ride so high off the ground, but the DBX makes a valiant effort to not only minimize that sensation but to feel more like a lower-slung grand-tourer and a real Aston Martin from a quality perspective at the same time.

The DBX is definitely good for a luxury SUV, then, but it isn't without its faults. Yes, leaning really hard into traditional luxury still works, but having the additional technology found on cars that are half the price would put it way over the top.  The new Cadillac Escalade is a prime example. The quality of premium American cars as compared to their European counterparts aside, a system like Super Cruise is a force to be reckoned with. Aston is a smaller automaker with fewer resources, but the next generation of this car is going to need more cutting-edge tech in order to remain competitive because this thing is gonna start feeling old before the end of its model run. Radar cruise control and a 10-inch navigation screen are fine for now, but with cheaper cars offering curved OLED screens, hands-free highway driving, and more, Aston needs to catch up.

Just the same, the performance is there, however, the drivetrain fluctuates between being very impressive and just sort of existing. In certain situations, it's mind-bendingly fast, but sometimes the torque doesn't come in as hard, and the transmission can't shift smoothly or quickly enough to take advantage of what's there. There is also no launch control, something that would make this car seem more like a real hardcore Aston as compared to just a truck the company makes to keep up with the rest of the industry. Other Astons have it, and this car has AWD and over 500 hp. It feels powerful and angry enough to justify it.

Even without launch control or a faster transmission, though, the highs just can't be ignored. As a tool for pure driving, the DBX excels. The ride is unbelievable, and the drivetrain, although a bit fiddly, is great in regular commuting, providing far more than adequate power which makes passing, merging, or just plain ripping down the freeway extremely easy. Also, the fact that the DBX rides on an exclusive platform—meaning that it doesn't share one with nearly half a dozen other cars—makes it even more special.

The Bentley Bentayga is arguably the DBX's closest rival from a price and performance perspective, but it shares its underpinnings with the Lamborghini Urus, Audi Q8, Audi Q7, and Porsche Cayenne. That makes all of those cars less special. This Aston is its own machine. Not only that, but it looks better than the Urus, can own up to more brand snobbery than the Audis and the Porsche can, and is more performance-focused than the Bentayga or the Rolls-Royce Cullinan. The reason why people buy Aston Martin's sports cars is the same as why someone would consider a DBX.

It can also be specced up with enough details and doodads that make the Monroney read like the amenities of a five-star hotel. I would have to drive a base model DBX to really get an idea of what difference $39,200 worth of options makes—base DBXs start at $179,986 and the test car came out to $219,186—but a lot of the stuff is appreciable. Yes, AM is charging $1,600 for additions like blacked-out exterior badging and another $1,600 for grey brake calipers—however, all this is just a drop in the bucket for a prospective buyer. These options may be pricey, but there are also seemingly millions of them. Exterior colors number in the dozens, as do the interior upholstery choices. Paying north of $200k for a DBX means you're getting more or less exactly what you want—which is exactly the point of buying a luxury car: personalization and customization.

The DBX is a good car and a great luxury SUV. And it's not just any luxury SUV—of which there are many—it's also worthy of the Aston Martin name. "Aston Martin" evokes images of beautiful design and thoughtful refinement. And here, between the excellent chassis, great exterior design, and forged-solid interior, the DBX is a super SUV. Starting it up, the engine spins into life with utter smoothness. The V8's exhaust fires out the back, but from the inside, it's calm, cool, quiet, and comfortable. This car strikes a unique balance, and when it comes time for its second generation to be released, I'm sure it's gonna be even more impressive.

So, yes. The DBX is a good car and a great luxury SUV... for now. Because of its sheer assembly quality, performance, and aesthetics, it's worth its base price. But to extend further up the value chain, it really needs a tech update. The DBX is good to drive, but is it good enough to justify leaving out advanced driver aids like lane-follow assist? I don't know. But I do know, however, that as time goes on, more and more automakers will offer these features. And if Aston doesn't step it up, it might get left behind by buyers who will begin to expect them.