Mercedes' mid-size sedan has a ton of technology and loses a little focus as a result. 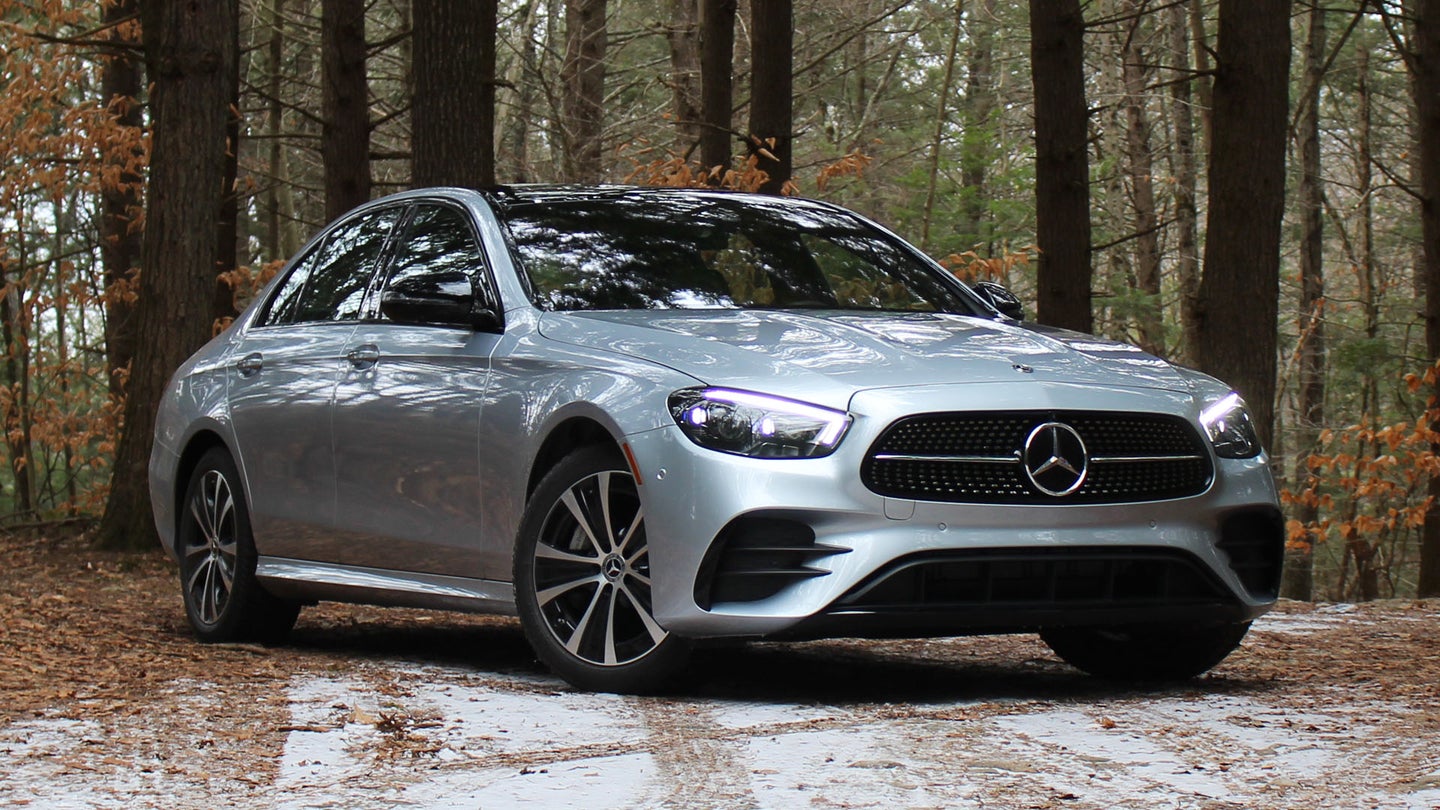 Mercedes is the master of luxury automobiles, and the 2021 Mercedes-Benz E-Class is one of the brand's premier offerings. A mid-size sedan to end all mid-size sedans, it's designed to be as comfortable and capable as possible, perched on a higher branch than Audi's A6 or BMW's 5 Series. It's also the oldest of that Germanic trio, with production stretching all the way back to February 2016. Well past time for a hefty update, then. And that's what this year's model brings.

For the most part, the refreshed E-Class is a polished gem. It's very quiet at high or low speeds, it has a slew of luxury features like massage seats and a perfume system, and the lovely inline-six is a smooth operator. But there's also a sense that the people who designed it wanted the driver to have a massive selection of features to keep them feeling full. It's more than a nice car. The end result of that strategy is a true luxury machine—though one that misses the mark a bit by barraging its occupants with technology in a quest for ever-more comfort and convenience. The E450 4MATIC sedan I drove felt right on the cutting edge, and a bit rushed as a result.

All the Car You'll Ever Need

This latest, "W213" E-Class debuted in 2017. It's roughly the same size as the old "W212" car but has a ton more modern technology and convenience features. After three years on the market, it was facelifted in 2021, and that's the car I drove here. The refreshed W213 gets updated headlights, bumpers, taillights and other important changes like a whole new infotainment system, however also in the mix is some new mechanical hardware; a mild-hybrid straight-six engine. This new smooth, powerful motor is a really good reason to get a facelifted E450, although it's far from the only good thing about the car.

On paper, the E450 makes a lot of sense, even in the face of the SUV onslaught. It has comfortable seating for four and five in a pinch. It has weather-beating all-wheel drive, a big trunk, and despite its interior roominess and road-hugging curb weight, it managed 30 miles per gallon on the highway even while packing a more than adequate 362 horsepower. That's more than a hundred hp more than the E350 but it still gets nearly exactly the same fuel economy as the lower-trim car—an extra mpg around town, in fact. So it's spacious, all-weather capable, and easy on your wallet. Well, at least when it comes to the pump.

Mercedes builds on this underpinning excellence—more on that later—by giving the E-Class a luxurious interior full of things that kept me busy. Heated and cooled massage seats for the driver and passenger with several settings to satisfy your every whim, a little jar of perfume that sits in the glovebox, and extensive ambient lighting to set the mood. There was also a 13-speaker, 590-watt sound system that's good—although admittedly not the best I've heard, especially for the price—and a slew of electronic gizmos that made the interior feel like the latest and greatest in consumer electronics. 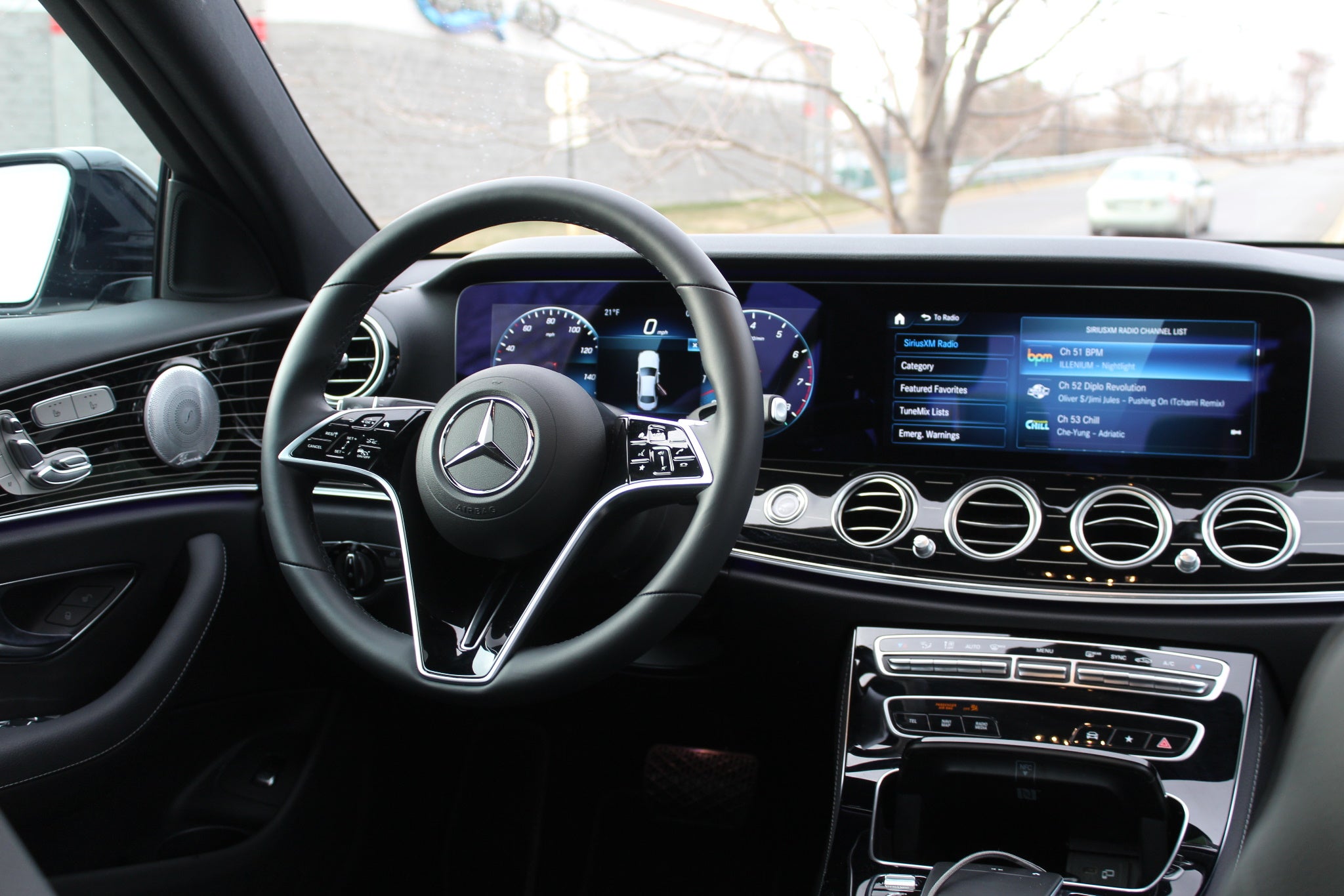 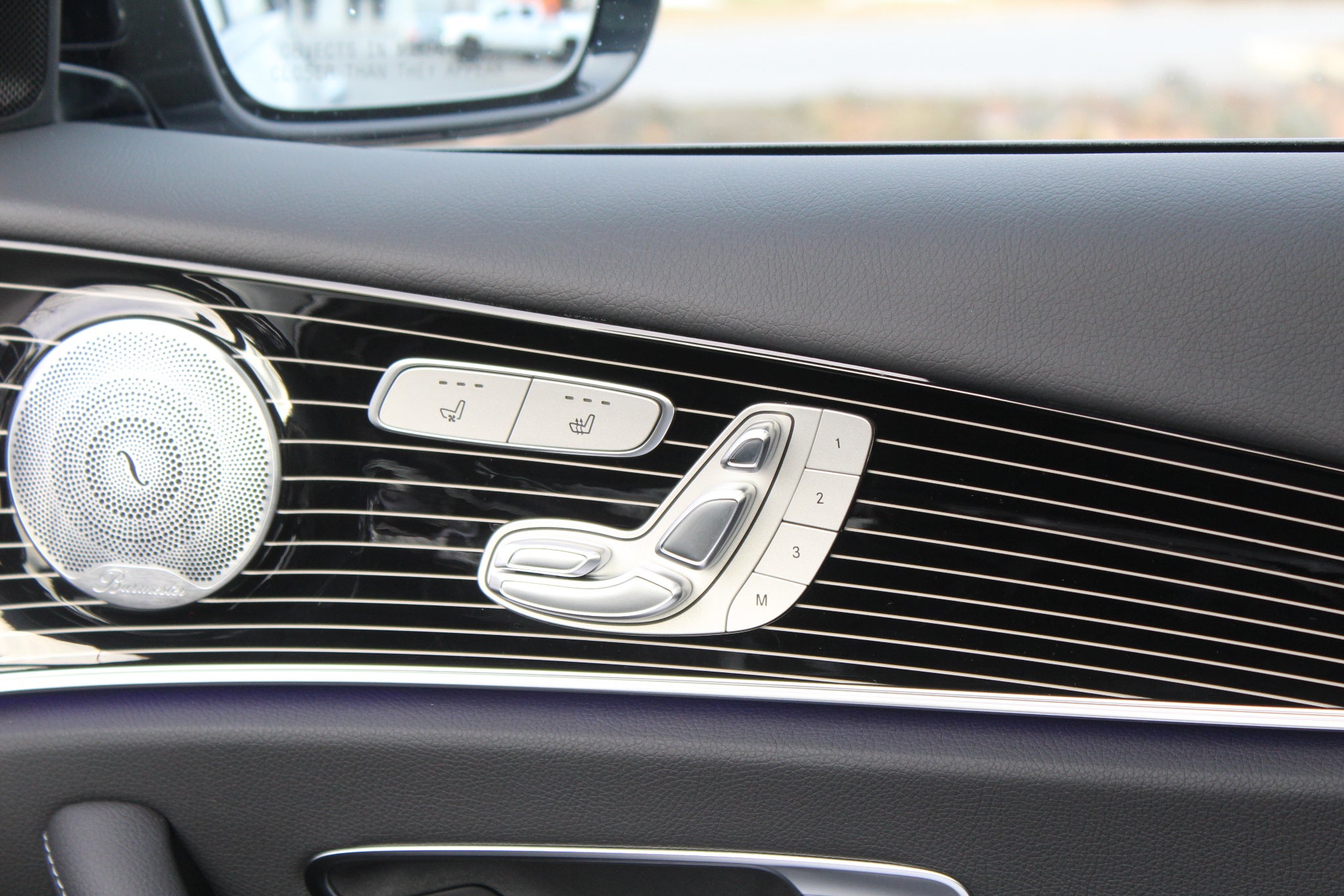 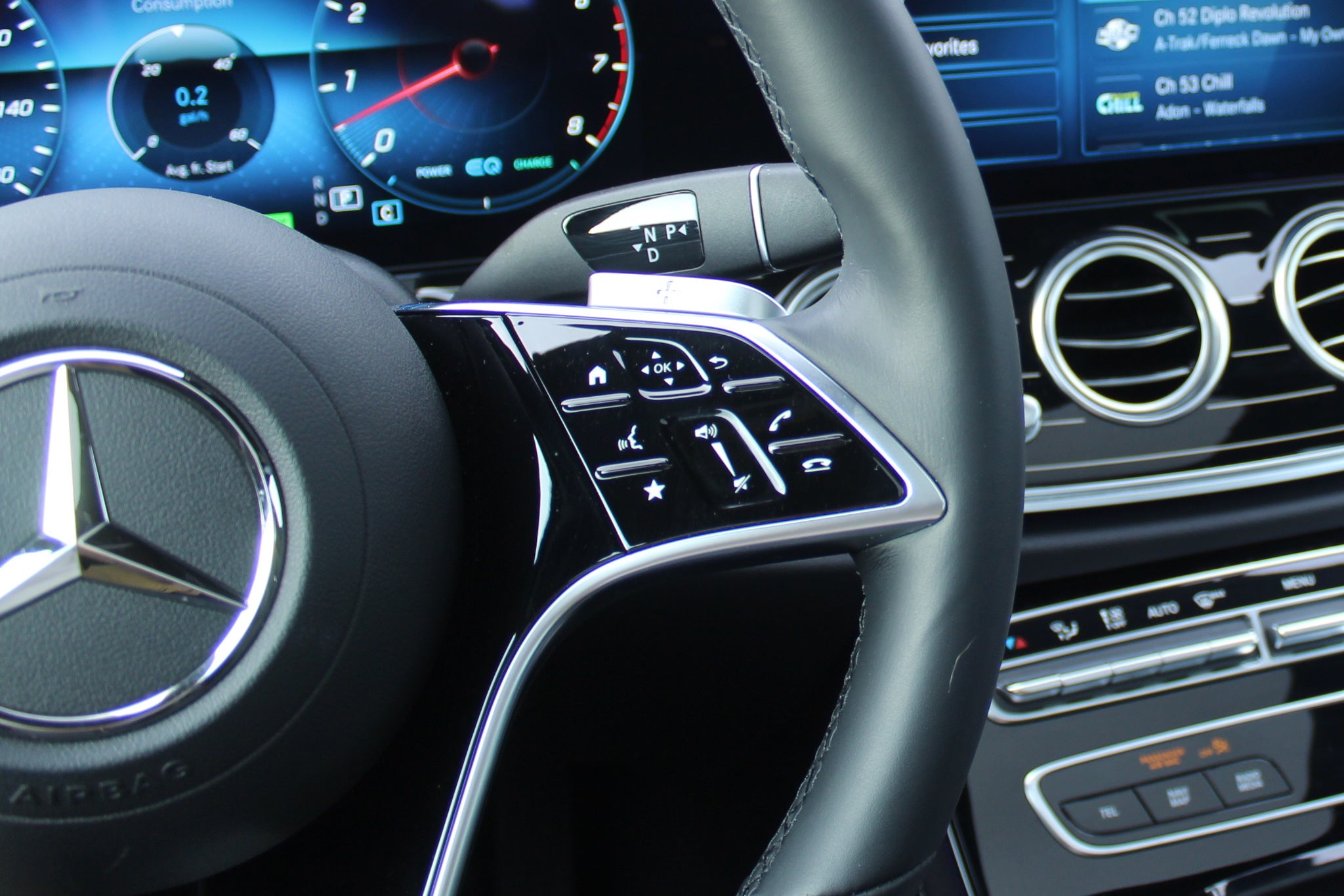 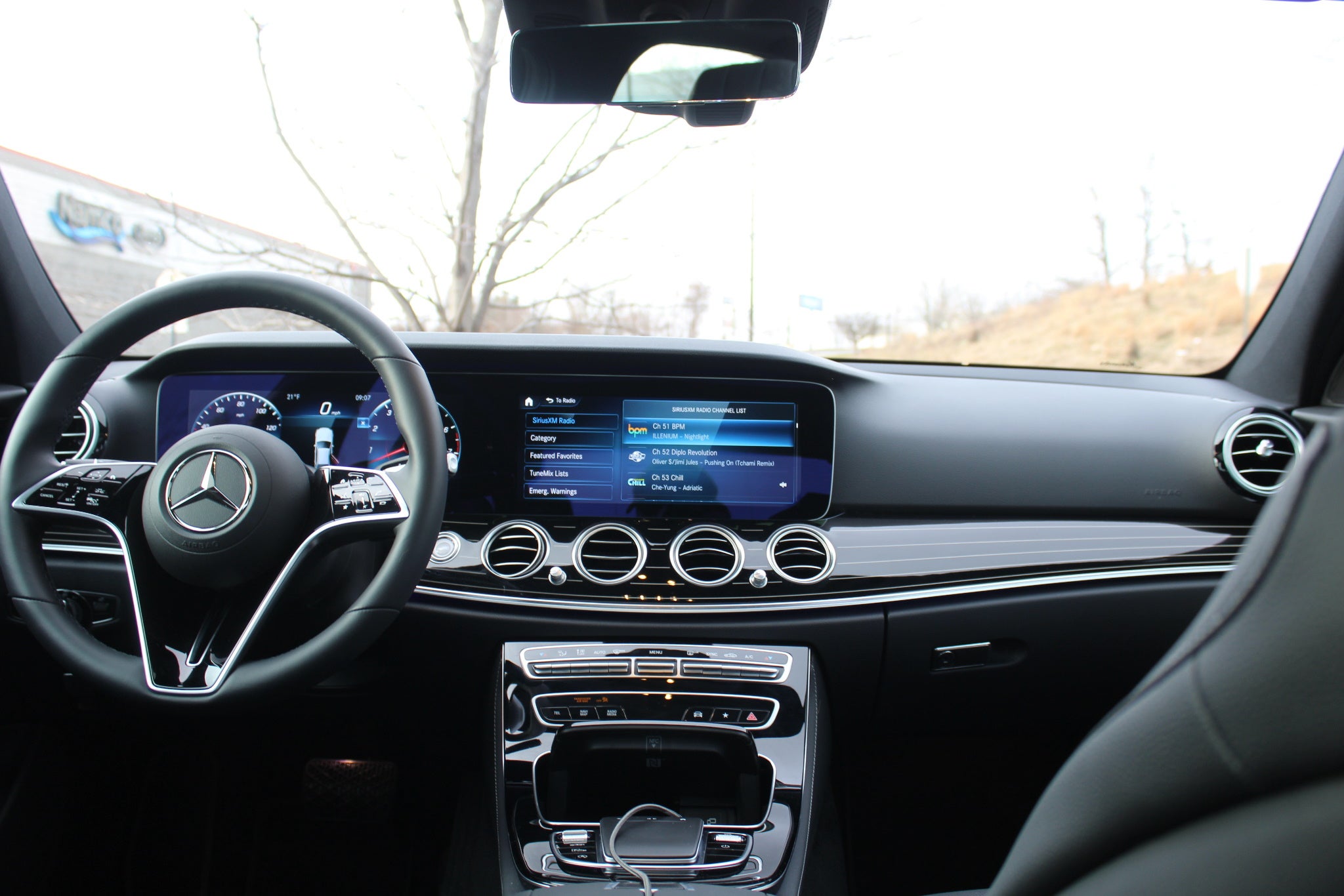 Let's pump the brakes here, though. Almost everything I've mentioned above is an option. The ventilated massage seats, the fuel-sipping hybrid engine, the perfume, all of it. The only standard feature listed above is the heated seats and ambient lighting. Heck, even my nearly $82,000 test car didn't have a heated steering wheel. Unable to find the button for it on a particularly chilly Boston morning—this thing is 80 grand, I'm just an idiot and can't find the button—I asked the (very good and $200) Mercedes voice command system to turn it on for me. It heard what I said and began to respond; "I'm sorry..." oh, I'll have to repeat myself, that's frustrating... "this vehicle is not equipped with a heated steering wheel." I didn't really know that to think after hearing that—the vehicle even had optional heated armrests, but not a heated steering wheel. I carried on with cold hands and a sense of bewilderment at the technology around me.

Gradually, that sense of being overwhelmed began to grow, particularly when it came to the suite of driver assists. This was strange because the E450, at its core, is built for cruising long stretches of highway. This is where some of that underpinning excellence came in. The vehicle's massive 21.1-gallon fuel tank and above-average highway fuel economy enable an EPA-estimated range of nearly 550 miles. Just the same, the nine-speed transmission allowed for very low RPMs at above-average speeds. Combine this with a very comfortable air-sprung chassis (a $1,900 option) and $1,100 worth of optional acoustic insulation, and even a lightly-optioned E450 would be an impressive one.

The driver assists were far from impressive and made all of that baked-in goodness easy to ignore, though. First off, the lane following system is hands-on and really liked to bounce me around inside the lines. In a Mercedes, for more than 80 grand, it should be able to keep you straight. And really, at this point, I shouldn't have to have my hands on it. Cadillac is miles ahead in this respect. I wouldn't even mention that if the rest of the car didn't feel so modern. Changing songs or adjusting volume on the steering wheel requires a swipe instead of an archaic button press and almost everything can be activated effectively with a stroke of the 12.3-inch touchscreen or a simple voice command.

The radar cruise control also has something of an alarming flaw. Some states like Maine post a minimum as well as maximum speed limit on roadside signage. Multiple times, the Mercedes would read the minimum number and automatically adjust the cruise control to that. As a result, the car would suddenly and unexpectedly begin braking—firmly—down to something like 30 to 40 miles per hour in the middle of the Interstate. It didn't succeed in reading every posted limit which somehow made this whole experience a bit more nerve-wracking.

This only compounded previous issues I had with the vehicle's other systems. The car's overhead parking assist graphic was very easy to use and illustrated the physical world around the car well, but it frequently saw ghosts, sensing and beeping at objects that weren't there.

Just the same, if there's debris on any of the sensors the car has no logic to recognize that. When I was going under something like 15 miles per hour, the car would beep constantly if there was ice, snow, anything obscuring the sensors. That was very easy to shut off thanks to the excellent voice command system—another point for that $200 option—but still annoying and something I had to remember to turn back on.

All of these features quickly became a nuisance and stood directly in the face of a basic platform that seemed solid like a rock. The engine performed admirably if not sounding incredible in the process and the interior was well-designed with a massive shield above the touchscreen so there was never glare on it. As a commenter pointed out, the transmission would also always start me in second gear in the default comfort mode just so I could roll away a bit more smoothly from a start. 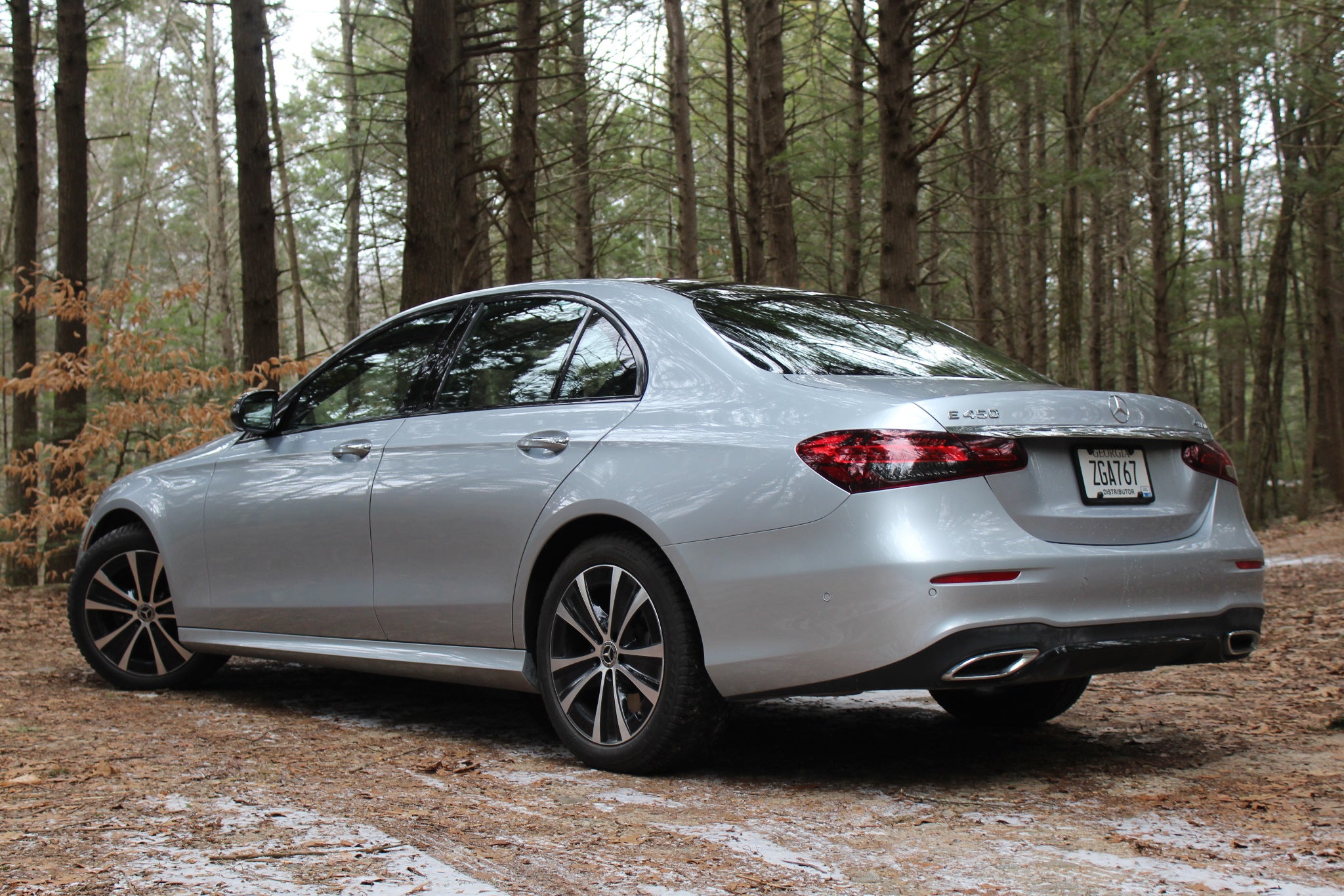 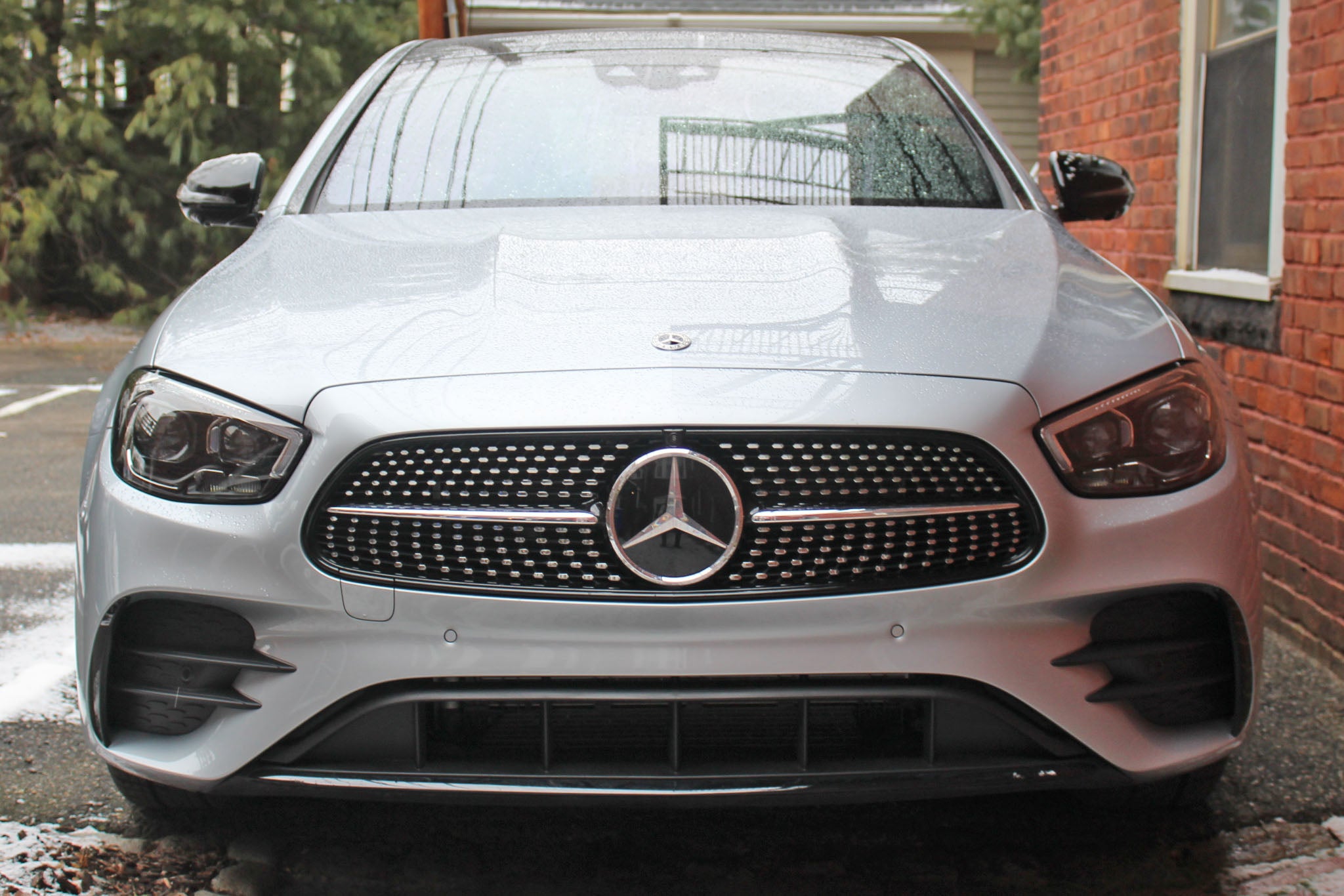 The wheels appeared to have ten spokes but actually only had five, with blacked out features doubtlessly designed to improve aerodynamic drag and save fuel. Did I mention this car has a drag coefficient of just .23 (a BMW i8 is .26)? Or that the engine has no serpentine belt on account of its 48-volt electrical system? These are all things that buyers would likely never notice or care about, but Mercedes considered every detail and that's part of what makes the brand great. How a company so in-tune with the finer things could ship a vehicle with systems so buggy is... confusing to say the least. Almost all of the technology outside of the infotainment system seemed rushed out against a looming deadline.

Without these assists, the E450 drove well, though. The steering was light and comfortable, the transmission prioritized smoothness above seemingly all else, and the engine's power delivery was linear and predictable. Despite being turbocharged, it didn't feel like it. It felt strong and naturally aspirated, pulling the car along with an above-average pace. It wasn't wildly fast—the E450 is a bit too dignified for that—but I never found myself in a sticky situation on account of a lack of power.

The ride was pleasant, especially with my car's optional air suspension. I saw no reason to ever take this car out of comfort mode. In sport mode the manual shifts were a bit slow and the engine started to sound unrefined, like it wasn't in the vehicle's nature to be so aggressive. It has a column shifter, after all. It knows what it's good at, and the sportier albeit less powerful 530e would be more in line with a performance hybrid if you're looking for that.

Really, the mild-hybrid system in this car lives in the background, and wasn't as pronounced as I was expecting. It made the automatic start-stop more bearable but not invisible. Likewise, the "e-boost" it claimed to give me was not noticeable. Clearly, the system helps saves fuel—a 4,200-pound sedan getting 26 mpg combined is more impressive than it sounds—but if you're looking for smooth, silent, electric power, you're not going to find it here. "Mild" means no full-electric mode and no added power of any serious consideration, at least in the 450 trim of the E-Class.

Everything, in fact, seemed to want to live in the background, which is a noble goal for a luxury car. Plenty of power but not obscene amounts, a transmission (of course) but one that tries to keep shifts unnoticeable, and a ride that will never jounce you around or jar you. As far as priorities go, the E450 has them, and it's clear what they are.

This raises the question of whether or not you should buy an E450. I think, given the strong alternatives from BMW and Audi which you should certainly consider, it would still be a good move. The issues I had will doubtlessly be ironed out if they haven't already and Mercedes builds its brand on things working and working well. I wouldn't recommend any sane person buying this car and keeping it after the warranty expires, but that's a whole can of worms we won't get into here.

What is worth getting into are the basics of this car. It's an ideal long-distance cruiser that can be made extremely comfortable like my test car was. There's a package just to make it quieter, heated armrests are available, and half a dozen different massage settings that kept me awake on long nighttime drives. At one point in this car, I was stuck doing 10 miles per hour in traffic down a snowy highway. That drive could've lasted hours more than it did and I wouldn't have cared. I had more gas than an aerial tanker, I was nearly as comfortable as I've ever been in any car, there were lights, sound, smells, it was pleasant to say the least.

It's a flawed car, that goes without saying, but its strong roots were impossible to navigate around. At its core, it's a Mercedes, and that thankfully still means something. The E-Class is still a confident contender and—in terms of luxury—a head above its rivals.