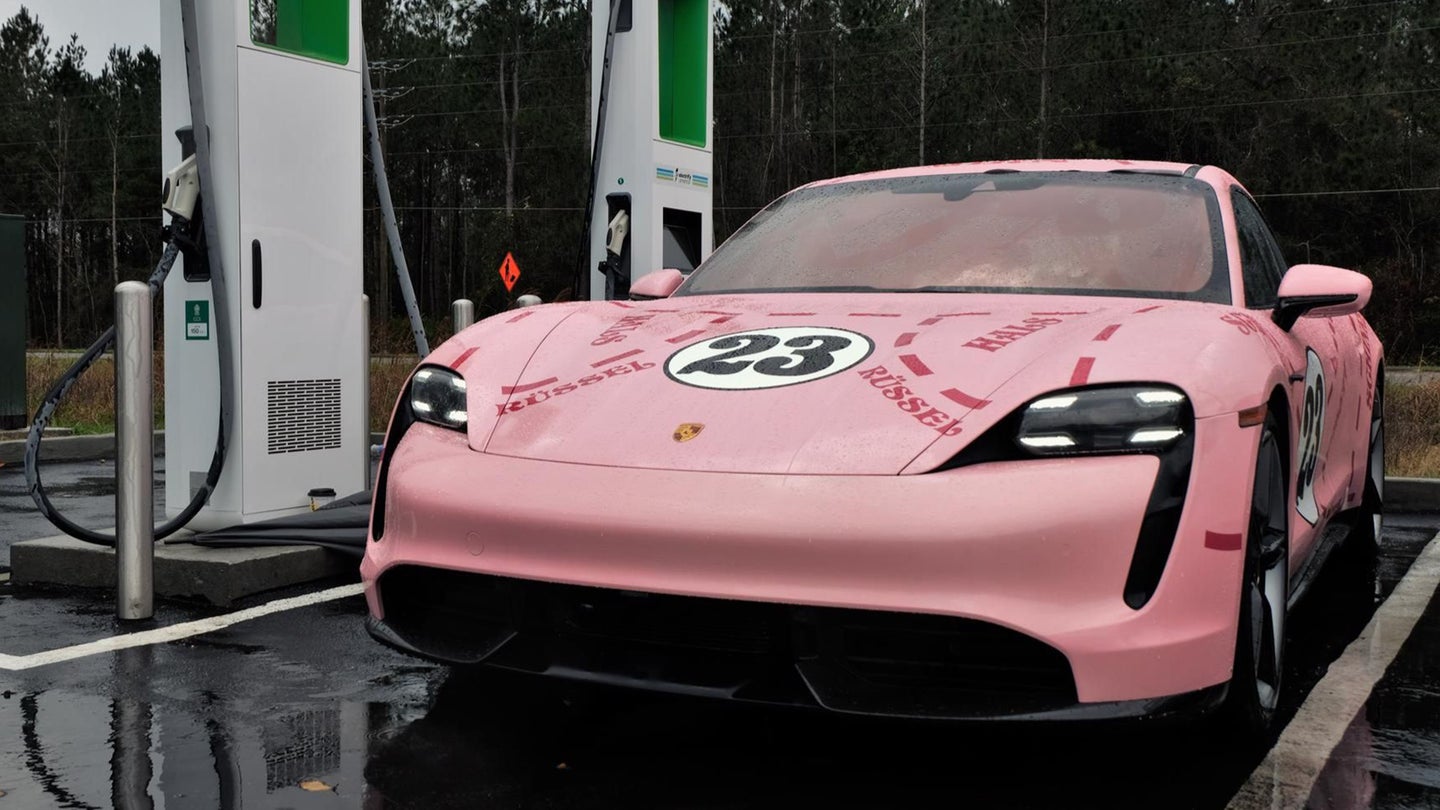 The day began with a childish belly chuckle. I was worried the Porsche Taycan Turbo S supplied for our road trip from Atlanta to Amelia Island would be painted a boring white, but it turns out that Porsche wrapped two of the Taycans in our convoy in the company's classic Brumos and Pink Pig Porsche liveries, intending on showing them off to the Concours crowd this weekend. I picked the Pink Pig for the 357-mile trek, because why wouldn't you pick the Pink Pig?

The planned route saw me taking highways for nearly the entire trip, with U.S. Route 75 making up the bulk of the distance between the two cities, and Florida’s Route 10 used to curl back toward our final destination, Amelia Island. It isn’t the most direct route, but it put us within an appropriate proximity to the ultra-fast chargers we’d be using.

But before I had a chance to settle into the car, a problem arose—rain. My sweet dreams of silently blasting down southern Georgia's long straights and bombing into northern Florida melted in the morning storm, which vacillated between a piddling drizzle and a window-beating sideways deluge. Porsche’s top two tenets, speed and handling, wouldn’t be tested today unless I wanted to end up like the Tesla Model 3 I came across that went off into the median and practically buried itself in the soggy Georgia grass.

What I could do is focus on something Porsche doesn’t really like to talk about—the Taycan's range. As I highlighted yesterday, the Taycan Turbo S has an EPA mileage rating of 192 miles per charge from its 93 kWh battery pack. Porsche contends the real number is higher and wants a redo from the organization. I didn’t want to hyper-mile the Taycan, but nor did I want to drive like some yahoo hellbent on setting a new road trip record between the two cities. I wanted to drive like a well-adjusted adult, and figure out a real-world number that could apply to an actual owner.

Starting from the hotel’s parking lot, the Taycan’s range meter read 218 miles, more than enough to get to our first stopover 125 miles south. With no worries over being stranded by the side of the road, I settled into the car and when the conditions were favorable, rocked a solid 75 mph average speed for the first highway blast (a figure that papers over a few outlying bursts of acceleration, but you know, this is a car review). The south’s straight, flat roads and odd weather patterns made the tour rather mundane and there’s little to report aside from the lack of engine noise and the seats being extremely comfortable.

By the time I pulled into a Walmart parking lot and plugged the Pink Pig into the Electrify America ultrafast charger, I’d siphoned more than half of the Taycan’s range and felt comfortable believing that the gauge read true. But though I had stopped with more than enough range to reach the Walmart, the unmistakable specter of range anxiety began bouncing around my head as I faced the next portion of the road trip, which was longer at 175 miles.

One issue, often discussed in tandem with our electrical infrastructure challenges, was that the Electrify America charger’s energy flow slowed when we hooked up both the Pink Pig and Brumos cars and a third Taycan driven by legendary racer Hurley Haywood and cinematographer and racer Jeff Zwart. With the three cars all sucking down volts, the chargers did their best to keep up with the demand, but ultimately had to spread the love around. An Audi e-Tron showed up midway through our charge too, which slowed it even further.

Altogether, the stopover took around 20 minutes, which isn’t terrible, but obviously not as quick as your average gas stop. With the three cars primed to nearly full, we set off on the second leg. And since I seemed to have enough battery to make the second stopover, I started stealing some extra electricity to crank up the cooled seats and that rocking 3-D Burmester audio system.

Mercedes' 3-D Burmester is perhaps my favorite car audio system—it bangs. Yet I was staggered at how good it sounds in the Taycan with pure highs, well-placed guttural lows, and an immersive soundstage as good as a live concert. All the better to not have to compensate for engine noise. To my ears, it’s head and shoulders above Affalterbach’s.

“We get a similar system to Mercedes,” Porsche spokesman Calvin Kim told me, “The same basic components are there, but Porsche has it so that it has the ability to change certain metals and parts in the speakers, metals and plastics and leathers in the doors, and sound direction paths to better immerse the passengers. Other manufacturers don’t.”

Distracted by how good the audio was, I failed to notice the dwindling range until a sharp tone rang through the cabin and a display popped up telling me that I could either turn around to hit the nearest charging station 10 miles back thataway or continue to the planned stopover in Range mode. Range mode limits speed, locks the HVAC in Eco, and changes a number of dynamic systems to ensure enough juice is left. It felt like a challenge; I set the speed at 70 mph, and somewhat nervously watched the charge meter.

Miles ticking away, the battery continued to wane crossing the state line into Florida, but I pulled into the second charging station with 12 percent still left in the cells—turns out that warning signal had popped up with the Taycan capable of driving at least another fifty miles, which feels overcautious at first but makes a little more sense when you consider the dearth of public charging stations in America.

Going from 12 percent to nearly full took another 35 minutes. Again, a not-insignificant amount of time, but it does give one the chance to stretch legs, eat donuts, and fiddle with Porsche's endless in-cabin customization settings. I'll play with those more tomorrow.

The last leg of the trip was far more pleasant than the first two, with the sun piercing the clouds for a good stretch, though once we got closer to Amelia Island, the pouring rain returned to stymie our progress. It also helped that the third leg was the shortest, breezing by in short order, and without a lick of range fear.

I have thoughts about the Porsche Taycan to digest. My initial reaction is positive, especially considering a 370-odd mile road trip in an EV is still kind of an outside use case at the moment, and the car handled it just fine. With a little care and planning, you could make this trip with just one charging stop. That's one more stop (at probably 35-45 minutes for a full charge, don't forget) than you'd have to make in a 911, which can go over 400 miles on a tank. The Taycan isn't inconvenient, but it is less convenient at this point.

A number of other questions still need answers, and they’ll only be found with more time behind the wheel on drier roads. Even in Range mode, there's still a barely-contained feeling behind the wheel that this is a proper Porsche, and what a proper P-car wants to do is slash through a good curve or get unleashed on a track.

Tomorrow is supposed to have clear skies and sunny, and I already scoped out a few good roads around here. Hopefully, the weather holds and I get to loosen the reigns and see if this Porsche is a true Porsche. If you have any more questions, or want me to hit on another topic while I have the keys, let me know.