The Porsche 718 Boxster S, Driven at Lime Rock: Still the Same Where It Counts

We took Porsche’s latest mid-engined roadster for a burn around one of the race tracks that jumpstarted the Porsche legend in America. 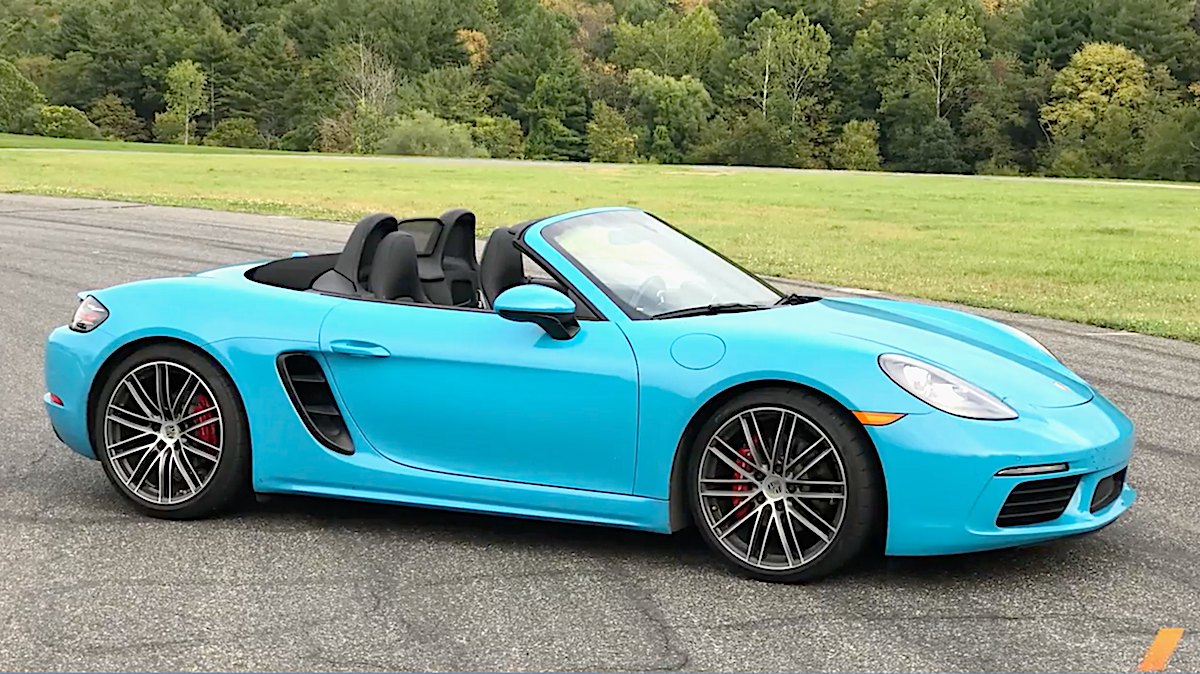 Just like John Updike once wrote about Boston’s Fenway Park, Connecticut’s Lime Rock Park is a “lyrical little bandbox” of a racetrack. The 1.47-mile asphalt ribbon of mostly right turns was born during sports car racing’s most glorious of glory days. Over the years, it’s hosted everything from Formula Vee buzzbombs to Le Mans prototypes. The course was updated in 2008, but from the hills above, Lime Rock still looks very much like it did in the late 1950s, when gravel purveyor Jim Vaill and racer John Fitch carved it into the lush foothills of the Berkshire Mountains.

Lime Rock opened in 1956 just as America’s sports car obsession was gelling, first around traditional scooters like the MG TC, then later encompassing a new era of space-age roadsters like the Porsche Spyder. The 550 Spyder was practically purpose-built for Lime Rock; its profile utterly fit the circuit’s proportions, and Porsche’s 1.5-liter, quad-cam flat-four, producing between 125 and 135 hp, could rocket the flyweight Spyder over the road course’s famous uphill with a briskness the MG could only dream about.

In 1959, a young Roger Penske nailed his first win at Lime Rock Park in a next-gen development of the Porsche Spyder: the 718 RSK. With a redesigned spaceframe chassis under a similar alloy body, the 718 was lighter than the 550, while its more powerful mid-mounted flat four, producing 142 hp, made it a mini monster on the Lime Rock hills. It was no surprise the 718 would perform well here; a year earlier, it had podiumed at Sebring, Le Mans, and the Targa Florio.

Considering the 718’s history, testing the latest mid-engined Porsche at Lime Rock seemed like a plan dreamed up in Captain Obvious’s headquarters. But we did it anyway. And when Porsche dropped off a Miami Blue 718 Boxster S, we all gasped a little. The color was one of those stunningly gorgeous shades a buyer considering resale value wouldn’t order in a million years. Still, the latest turbo-four version of the long-running Boxster couldn’t have looked more at home on an American racetrack if it had been stage-managed by Ferry Porsche himself.

One of the most distinguishing characteristics of Lime Rock is the way engine sounds echo through the valley; it’s the Radio City Music Hall of motorsports acoustics. The previous Boxster’s higher-revving flat six would have sounded like a symphony here. It’s hard not to lament the old engine when the turbo four gurgles to life, its throaty grumble unable to extend itself over the treeline.

But the lamentations stop at the end of pit lane. Aside from the lessened sonic drama of the engine, the most significant difference between new Boxster and old is the low-rev torque attack. The 718 Boxster leaps into Lime Rock’s first sweeping right hander like it’s trying to dig a wormhole to the future. The new, 2.5-liter turbo-four is a full-on ass-kicker, with bone-jarring low-rev torque, up from 272 to 309 lb-ft, and starting at 1,900 rpm, while horsepower is up 25 clicks to 350. While a manual 718 would have been more in-period, the PDK’s brilliance is still jaw-dropping. The first two gears fire off like tracer rounds, with no torque latency detectable between shifts.

The adrenaline kick is new, but the chassis is largely the Boxster's same, brilliant self. Our test car comes with sport PASM (Porsche Active Suspension Management), which includes adaptive dampers with a firmer Sport mode, and a lower ride height. All that tech, combined with brake-based torque vectoring, may be antithetical to Lime Rock’s throwback sensibility, but it does make the Boxster devastatingly accurate on the course's deceptively difficult corners. The final corner that dumps out onto the Sam Posey straight is a complex beast that’s hard to get right. It’s as fast and deadly as it seems simple and straightforward, starting with a high-grip compression and ending with an outside wall that’s disconcertingly close. In most cars, achieving maximum exit speed demands a dead-nuts accurate entry. In the as-tricked-out Boxster, you get far more leeway to correct shoddy workmanship without shedding too much speed.

Of course, it helps that the 718 has stunning brakes, and its electrically boosted steering is among the best in any sports car extant. A rack donated by the 911 makes the 718’s steering ever-so-much quicker, while there’s just enough weight to keep the feel substantial while matching cornering load precisely. In fact, there’s nowhere in the car-driver interface the Boxster doesn’t excel, including seat comfort, bolstering, and driving position—and despite the cloth top, the interior is eerily quiet.

That’s a bit disconcerting. Yes, the new turbo-four 718 Boxster S does compromise on the drama of the previous NA-six version. Few other experiences in the new-car world could match wheeling a high-revving, manual-transmission Boxster around a compact track like Lime Rock. The word “magic” gets tossed around a lot, but it fit; that previous car truly was transcendent.

But in a 2017 context, the 718 Boxster is a supremely exhilarating sports car. Its quickness completely usurps that of its predecessor, and despite such a major change in powertrain profile, it is no disappointment. In the context of its sports car peers, the 718 Boxster S's capabilities cannot be matched.

Without doubt, the 718 will find its own place in the canon of Porsche Boxsters. Even if this turbo-fied version devours tarmac with a startling greediness everywhere, the Boxster feels more at home here than it does anywhere else we’ve ever driven it. It truly is the Lime Rock sports car.