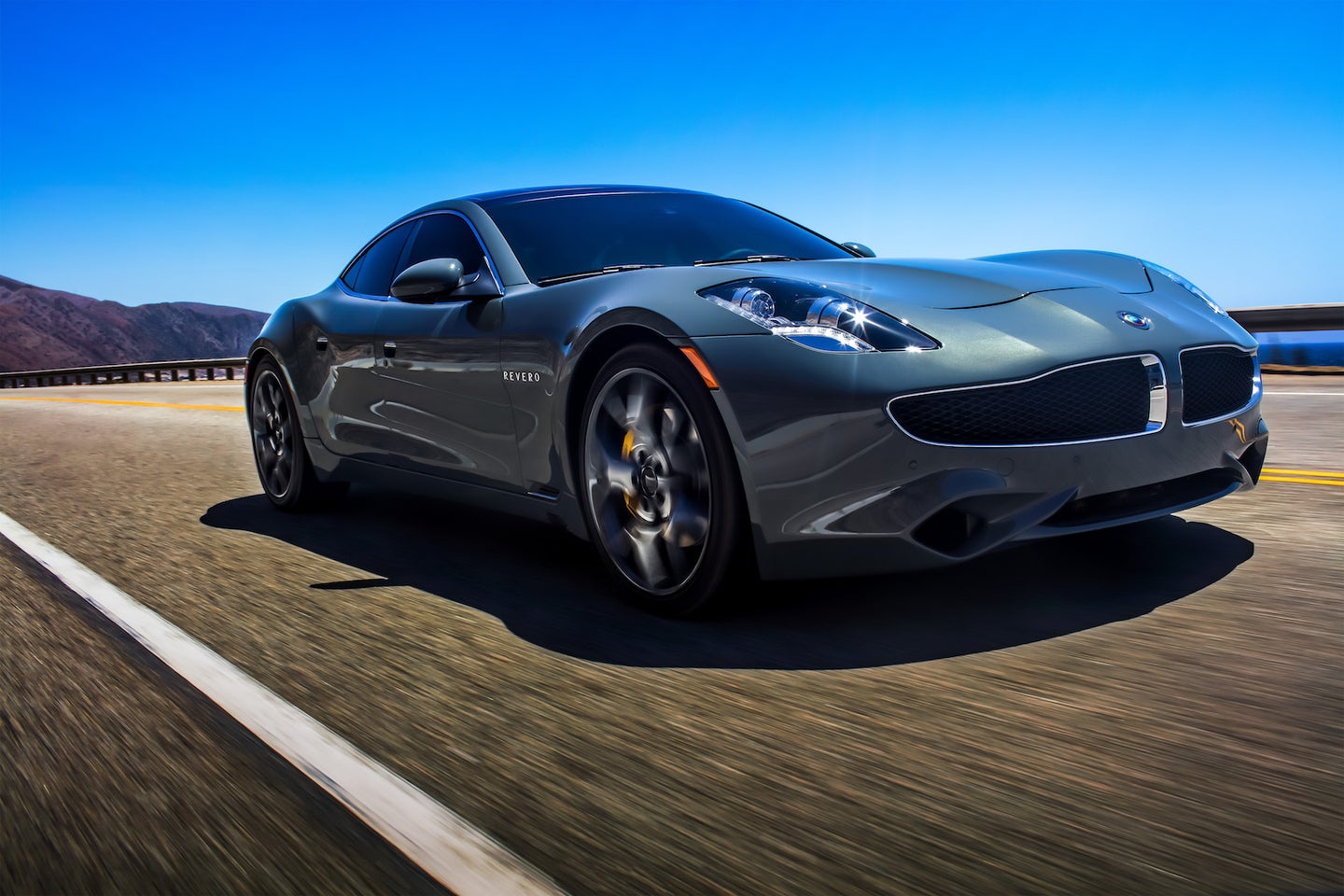 It’s baaaaack. Like a crazy ex, or a walker from The Walking Dead, the Karma Revero has risen from the past, from the spectacular ashheap and subsequent fire sale of the defunct Fisker Automotive. The reanimated company, now called Karma, is essentially a start-up. It’s grown from 20 employees—including some key holdouts from the original Fisker—to nearly 1,000 in just three years, with headquarters in Irvine, California, and a ground-up factory in Merano Valley, about 60 miles east of Los Angeles.

The Revero itself is more familiar, the automotive equivalent of David Hasselhoff. Like The Hoff, the Revero may spark some nostalgia...or more conflicted feelings. It’s a mildly reengineered version of the Finland-built Fisker Karma, the plug-in hybrid created by former Aston Martin chief designer Henrik Fisker. (Who's since gone on to make his own, unrelated electric car, but that's another story.)

The new Karma—owned by the Wanxiang Group, a Chinese-based auto parts multinational—has delivered its first 10 cars to customers as of this story's writing. Its initial goals are modest: to build roughly one car per day and 150 cars this year. Ultimately, Karma hopes to produce more than 1,000 annual units of a $130,000 luxury hybrid that can cover 50 miles on electricity alone—up from 33 when it was a Fisker—and another 250 miles when its 2.0-liter, GM-based Ecotec engine fires up to generate juice for a pair of electric motors driving the rear wheels. Apparently, the target audience is people who’ve never heard of a Tesla, or at least have no desire for a purely electric car.

The upside to the car became clear while it sat curbside at a SoHo hotel, where the Karma’s power to seduce onlookers seemed undimmed by time. The renamed Revero is still a lovely car, from its flowing, Italian-gran turismo proportions to its grille that recalls either a handlebar mustache or the Joker’s grin.

Jim Taylor, the longtime Cadillac and GM executive who’s now Karma’s chief revenue officer, sees one advantage in Fisker’s quick demise: Neither car nor company was around long enough to build a bad reputation with luxury buyers. A good 80 percent of people who lay eyes on the Karma still ask what it is, Taylor says. Indeed, Manhattan passersby practically lined up to snap photos of the Revero and fire off questions.

If the car's past all seems so long ago...it was. Henrik Fisker unveiled his Karma in 2008. Between its alluring looks and (unmet) promises of up to 100 miles per gallon, the Fisker secured a $529 million loan from a gung-ho Department of Energy, designed to spur both green-car development and the struggling economy. But while the Karma found some 2,300 buyers in 2012, the car turned out to be a 5,400-pound Trojan horse, with tepid performance, so-so mileage, and quality issues—including recalls over fire risks. The company was also notoriously snakebit. Its brutal luck culminated in 338 cars being flooded or set ablaze in the Port of New Jersey during Hurricane Sandy, a roughly $30 million inventory loss that its insurance company declined to cover. Fisker soon collapsed under mounting debt and the government's slicing of its financial lifeline.

Company engineers have upgraded the hand-me-down design wherever possible. That includes a new touchscreen, developed in-house, that handles virtually every infotainment and climate chore. Charging speed is doubled to 6.6 kilowatts, allowing a three-hour, Level 2 charge for the 20.8-kilowatt-hour battery. New DC fast-charging capability allows an 85-percent charge in just 25 minutes. Over-the-air systems updates are also new, with Karma monitoring cars to amass data, spot issues, and alert customers when they need service. The Fisker’s 200-watt solar roof panel remains, and though it adds only about twp miles of driving range on a clear, sunny day, it’s a key talking point for the car.

Getting some 200 Fisker suppliers back on board was a major hurdle, Taylor says, especially for a tiny company that wanted to order parts by the hundreds, rather than hundreds of thousands.

“They’d already been burned once, and didn’t want to get burned again,” Taylor says of the supplier network. For some suppliers that had folded during the economic crash, “There was no one to go back to, so we had to tool up parts ourselves.”

Under its skin, the Revero is largely identical to the Fisker, though engineers worked to address issues with NVH—noise, vibration and harshness—that had plagued the previous iteration. Its hybrid system generates a peak 403 horsepower and a hulking 981 pound-feet of torque, allowing a reasonable 5.4-second dash to 60 mph in Sport mode, which combines propulsion from both the spine-mounted lithium battery and gas-generated electricity.

I drove up Manhattan’s West Side Highway in all-electric Stealth mode, where the Revero in some ways performs its best: Emitting a whispery hum from its electric motors, and providing a sense of honest freedom from gas pumps and tailpipe emissions. Just don’t go all EV-crazy: With a 6.9-second excursion to 60 mph in this mode, the Revero would lose a race to a $35,000 Chevy Bolt, let alone a freight-train Tesla.

As I swung up the winding ramps to the George Washington Bridge, the old Fisker bugaboos announced themselves, literally: Tires send a loud ker-slap into the cabin, the massive 22-inch Michelins exacerbating an already stiff-legged ride. (Optional 21-inch tires will be a must in cities with dodgy pavement). There’s noticeable wind noise around the roof pillars. Steering is as thick and ponderous as before. While the low center of gravity does a fine job of limiting body roll, a driver remains fully aware of the Revero’s Suburban-like mass. Yet brake pedal feel is excellent, and there are three well-judged, driver-selectable levels of regenerative braking.

Move up to Sustain or Sport modes, and prepare for a visit from the Marley’s Ghost of Karma, clanking its steel chains: The 2.0-liter, 235-hp GM Ecotec engine moans, even wails when it generates juice for the AC electric motors. Up to roughly half-throttle application, the sound is better contained than before. But when you floor the gas (and then sit through an interminable beat of delay), the engine sounds like a hair dryer switched on inside the dashboard, filling the cabin with an unseemly racket. And because the engine only generates electricity, rather than helping to propel the car, its bumptious noises are often unconnected to actual acceleration.

The Ecotec isn’t the only piece from the cobwebbed GM parts bin. The cabin leather is reasonably deluxe, and the new touchscreen is welcome. But the Karma’s relatively cramped, dated interior still recalls an electrified Buick, especially in my test car's queasy two-tone treatment of caramel and black. Some black plastic switches, including the awkward, pillar-mounted mirror controls, trace back to the end days of Saturn, the malaise era of the pre-bankruptcy GM.

If those aren’t big enough hurdles for this made-in-America underdog, there’s the $130,000 price, which reaches $140,000 in loaded trim. Elon Musk’s feuding next-door neighbor might buy one out of spite. But even setting aside the more-affordable Tesla Model S—a pure EV with unmatched cachet, vastly superior performance and technology, and far more interior and cargo space—that $130,000 budget gives buyers their choice of some of world’s most mouth-watering dream cars: A 605-horsepower Audi RS7 or S8 Plus; a Mercedes S-Class, in your choice of sedan, coupe or convertible; a BMW B7 Alpina; for Anglophiles, there's a Jaguar XJR or a Range Rover. And if you simply must have a plug-in, the technically dazzling, road-conquering, luxury-dripping Porsche Panamera 4 E-Hybrid starts from just $100,000.

In an all-time understatement, Karma executives emphasize that the Revero isn’t trying to compete with Tesla. Instead, they envision it as a special car to pull out on weekends, the second or third car in a successful household. But considering the murderous, fast-moving competition in that market segment, with every automaker chasing the same subset of wealthy, discerning buyers, it’s hard to imagine how even a brilliant decade-old design would stand a chance—let alone a Karma that was roundly scorned by critics the first time they drove it.

When it comes to this type of exclusive car, I might hazard that you'll be the only person on your block with a Karma Revero. Only this time, that's not a compliment.