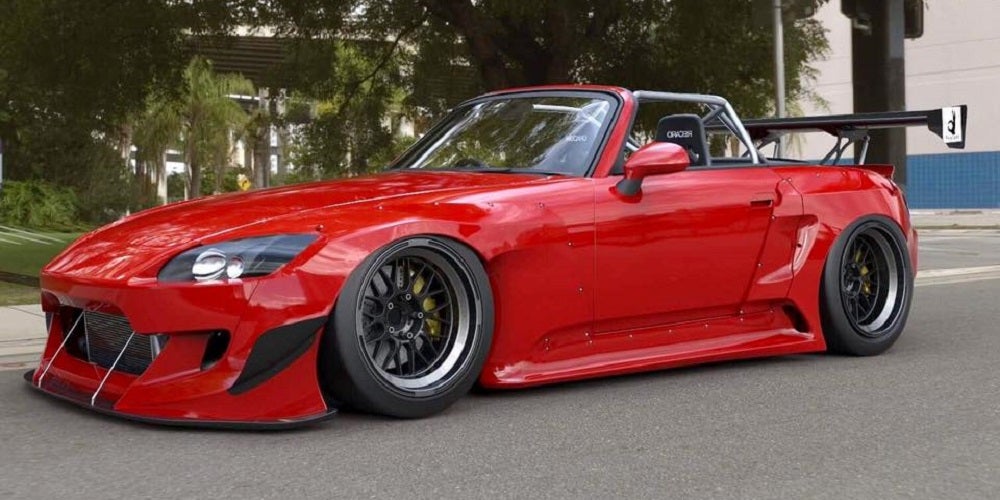 We've seen TRA-Kyoto's Rocket Bunny and Pandem wide body kits at SEMA for the better part of a decade, and just when we thought there couldn't possibly be another car Kei Miura can rivet his overfenders on – there is.

What do you think of TRA-Kyoto's rendering of its latest Pandem S2000 wide body kit? Inspired by the styling of the Pandem FR-S/BRZ V3, the Pandem S2000 kit drastically changes the roadster's appearance with a new front bumper, front and rear wide body fenders, side skirts, rear spats, rear ducktail, and GT wing.

It's honestly a typical kit from Rocket Bunny, and from certain angles, this S2000 wouldn't look out of place next to touge monsters like the Amuse S2000 GT1 or the J's Racing S2000 Type GT. However, take a glance at the rear fenders and you'll find one element that really shouldn't belong on an S2000 – the comically large side vent that overlaps the doors.

Perhaps Kei Miura wanted to give the S2000 a side profile inspired by its big brother, the original Honda NSX, but these vents obviously have no place on an FR sports car, especially when it's not functional at all. In fact, the cheap styling reminds me of some of the terrible Xtreme Dimension body kits that were popular on cars like the Mitsubishi Eclipse back in the '90s

That said, expect the latest S2000 Pandem kit to appear in a lot of shows later this year. Who knows, right? There might just be a radical mid-engine Pandem S2K that will make me reconsider.

I'm definitely interested in what you guys have to say. Share your thoughts on TRA-Kyoto's new Pandem S2000 wide body kit in the comment section below: