This immensely cool Nissan Figaro was a labor of love, and now it is no more. 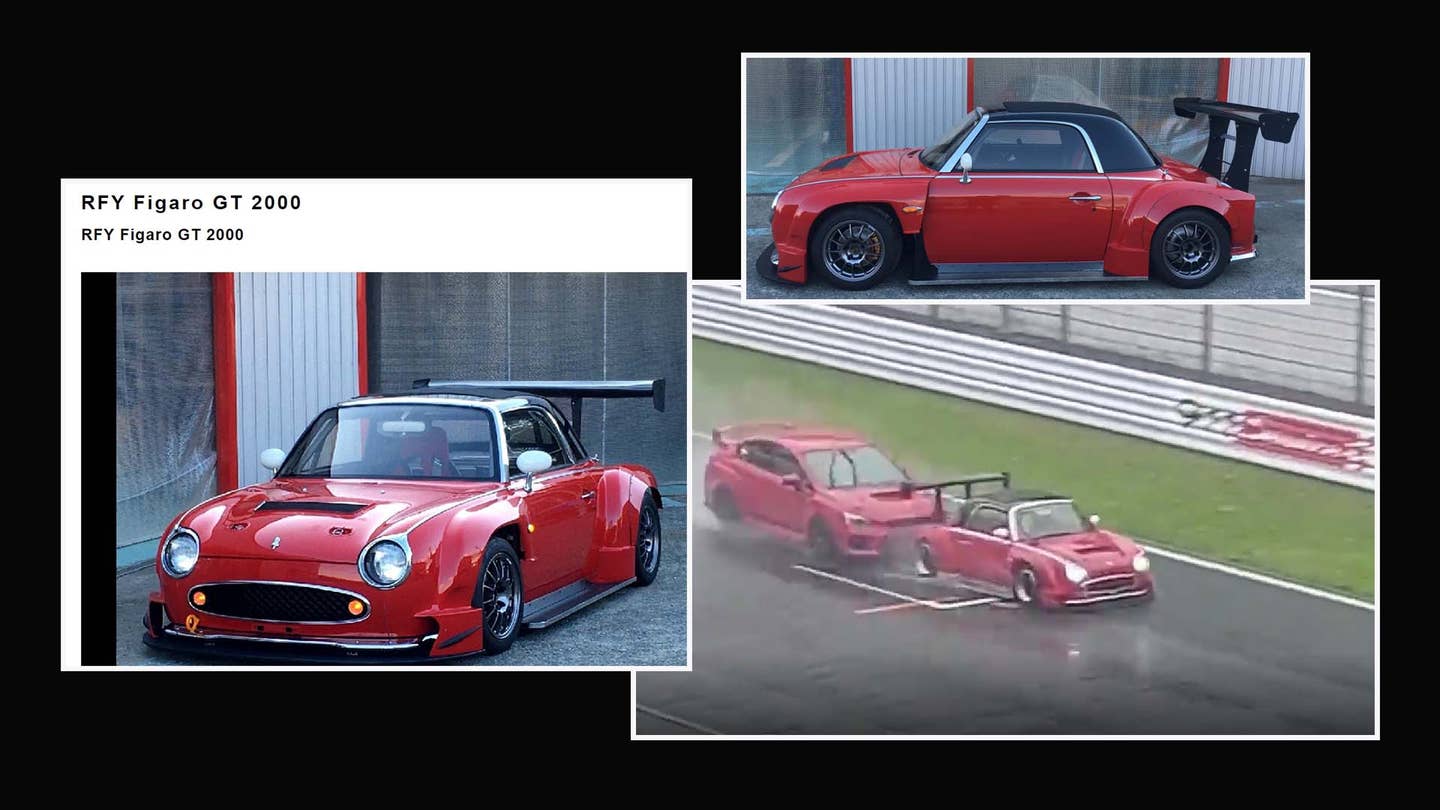 Unlike seemingly every other automotive culture nerd, I'm not a fan of the Nissan Figaro. I get its appeal, and it's cool that Nissan made a throwback-styled coupe for just the 1991 model year, but it's not my idea of fun motoring. Swap in a Honda S2000's F20C engine, though, and kit it out to be a hilarious little track beast like this one and I'm all game.

This particular red Figaro was constructed by Japanese tuner Racing Factory Yamamoto (RFY), and it's genuinely one of the best builds I've ever seen. It's amazing how all cars really do look better as race cars. That's why I was absolutely heartbroken when I found out over social media this past weekend that RFY's unique little monster was recently crashed into at Fuji Speedway.

In the above video, the scene is set at what looks to be Fuji's iconic front straight. As the Figaro is ripping down the track, what appears to be a faster Subaru WRX or WRX STI comes up behind it and smashes into its back end. The scene is horrifying, to say the least, and there's a lot to unpack.

To start, it appears that this is either a track day, a time attack event, or a test and tune day. It doesn't appear to be a wheel-to-wheel contest as there would likely be more cars around if it were a full-on race. Plus, based on the Figaro's coverage at this year's Tokyo Auto Salon, as well as the content that's been created since, it seems to have been engineered specifically as a track day and time attack rig.

Based on the small amount of time on the board, this could've been the Figaro and Subaru's first lap after trying to warm up their tires and brakes as best they could in these rainy conditions.

Up next, I can't help but juggle around in my mind how this could happen on a straightaway of all places, especially early in a session.

The Figaro, while quite small, is making a noticeably large rooster tail with all the spray coming off the back of it. I won't go submitting "benefit of the doubt" scenarios necessarily, but there's a chance that the Subaru driver didn't see the Nissan as their windshield could've been fogged up. Though, if this were the case, the driver should've waited until their windows were fully defogged before upping the intensity on track or even entering the track in the first place. Judging by photos of the Figaro during happier times, it has functioning rear lights that would've aided in less than ideal conditions like these, too.

Did the Subie driver experience a mechanical failure of some sort? Maybe the conditions greatly decreased their brakes' effectiveness? But then, it looks like the Subaru never stops accelerating before it hits the Figaro. Just as possible, maybe the Subaru driver's attention was drawn elsewhere?

No matter the reason why this happened, until both sides of the impact share their experience and discuss why this happened, all we can really do is hope that nobody was severely hurt. According to reports on Instagram, both drivers were fine, but I haven't been able to verify these claims. At the time of publishing, nothing has been posted on RFY's Facebook page about the crash, either. Post-impact stills show that everything in front of the Figaro's trunk appears to be unharmed, and the Figaro does have a roll cage, which appears to have done its job well.

The Figaro appears to be completely toast, which is undeniably sad to see. It's a massive bummer that such a cool car was destroyed under such odd circumstances. But hopefully, RFY either goes through what seems like a hell of a process to fix it, or gets its hands on another donor and builds it into something as wicked as this one was.

Gravel traps are there to slow down cars that come off the track, but they can’t work miracles if you’re already upside down.

It could’ve been much worse.