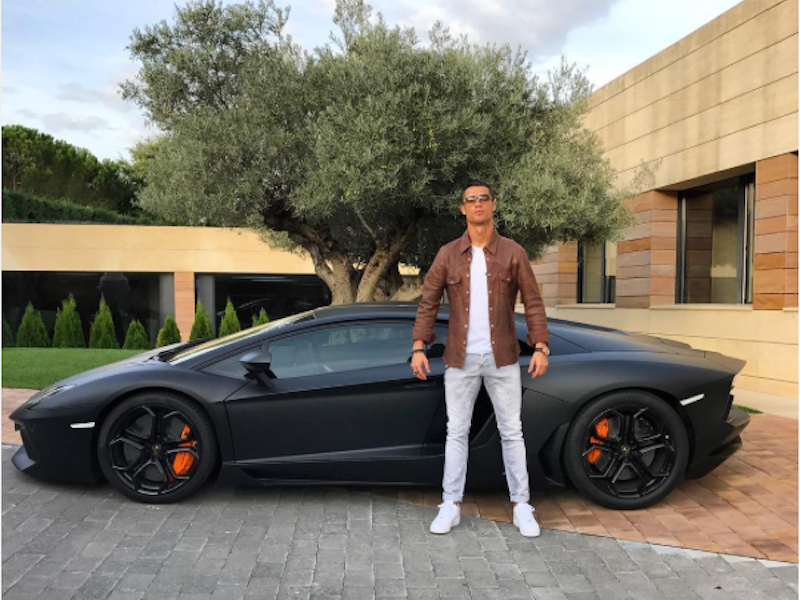 Real Madrid’s superstar soccer player Cristiano Ronaldo enjoys an annual salary of $35 million, making him one of the highest paid athletes in the world. That contract works out to $672,418 per week, so Ronaldo can flit around snapping up supercars like the rest of us buy snacks at the supermarket. He’s a gearhead and his stable of 19 cars reflects that. Tour Ronaldo’s garages and you’ll find a Bentley Continental GTC, a Bentley GT Speed, a Ferrari 599 GTB Fiorano, a Ferrari 599 GTO, a Ferrari F430, a Porsche 911 Carrera 2S, an Audi R8, an Audi RS6, a Rolls-Royce Phantom, and a Bugatti Veyron. Dude’s spent close to $5 million on wheels and all of them are great, save a Maserati GranCabrio. The soccer phenom’s latest purchase? A comely matte black Lamborghini Aventador LP 700-4.

A naturally-aspirated V12 all-wheel-drive stunner that generates 690 horsepower and 508 lb-ft of torque is a great addition to the herd. Could Ronaldo have opted for the LP 750-4 SuperVeloce Aventador, with that extra 50 horsepower? Sure, but no one’s going to call him out for that. What they will mock Ronaldo for is his inhuman posture while posing with his new bull. When the Portuguese forward uploaded this snap to Instagram earlier this week, his awkward stance got more attention than the car.

There’s a fine line between looking cool and looking like you’re the forgotten member of N’SYNC and unfortunately for Ronaldo, he falls into the latter category here. It didn’t take long for the lovely denizens of the Internet to rally, showcase their best Photoshop skills and roast the hell out of Ronaldo. Enjoy.