The FIA has taken pains to remind F1 drivers that there is a reason it’s not called the danger car. 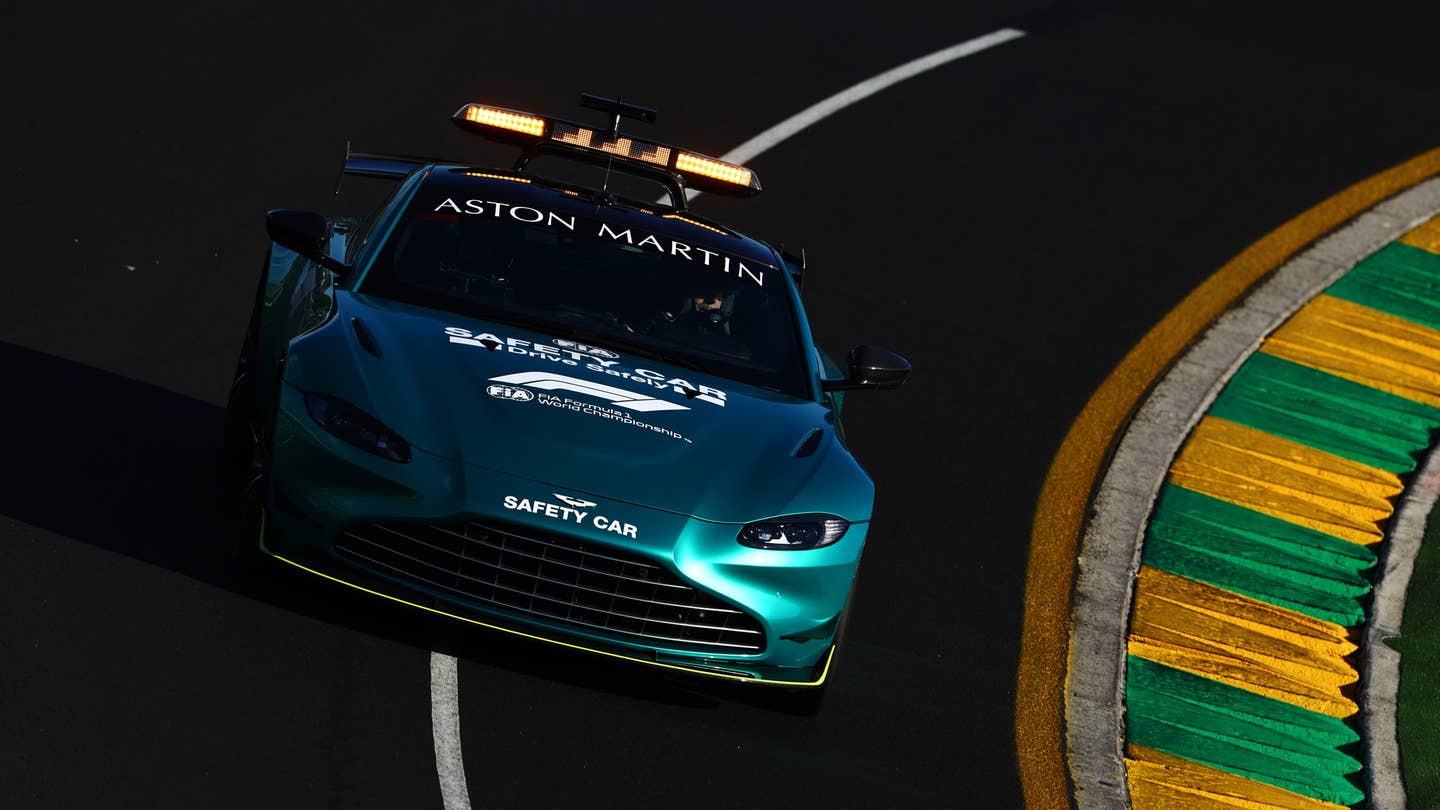 After Formula 1 drivers had a big groan about the Aston Martin safety car being slow "like a turtle" during the Australian Grand Prix, the FIA has reminded them that the point of it is to let cars go 'round at a safe speed, not to keep their tires warm for them.

At the first two rounds of F1's 2022 season, safety car driver Bernd Maylander had the luxury of his new whip, the Mercedes AMG Black Series, but the Aston Martin Vantage was back for the Australian Grand Prix. Multiple drivers had things to say about it, from Max Verstappen making the turtle comparison to race leader Charles Leclerc saying that he'd wanted to have a groan but had seen how badly Maylander was sliding in the corners and decided not to bother.

The problem is that F1 cars are very much made to go at F1 car pace and other cars are very much not. The Aston Martin Vantage might be an absolute track day weapon but compared to the 2022 Ferrari it'd get left in the gravel at any corner, which turns into a genuine problem for the F1 drivers when they're trying to manage temperatures on the car. On the one hand, they need to keep their brakes and tires hot enough to not totally lose grip and stability when they get going again; on the other hand, they have to manage airflow over the car that's craving much more speed to cool the engine and powertrain. So for once, this isn't just F1 drivers being a bunch of whiny divas but then again, the point of the safety car is to slow them down, as the FIA's responded in a statement today.

“The Safety Car procedures take into account multiple objectives, depending upon the incident in question, including the requirement to ‘bunch up’ the field, negotiate an incident recovery or debris on track in a safe manner and adjust the pace depending on recovery activities that may be ongoing in a different part of the track.

“The speed of the Safety Car is therefore generally dictated by race control, and not limited by the capabilities of the Safety Cars, which are bespoke high-performance vehicles prepared by two of the world’s top manufacturers, equipped to deal with changeable track conditions at all times and driven by a hugely experienced and capable driver and co-driver.

“The impact of the speed of the Safety Car on the performance of the cars following is a secondary consideration, as the impact is equal amongst all competitors who, as is always the case, are responsible for driving in a safe manner at all times according to the conditions of their car and the circuit.”

So, basically: drivers might think it's slow but that's the point of bringing it out. Safety cars aren't brought in when there are no obstacles on the track (well, apart from once in Formula 2 this year but that was a transponder issue that made it seem like a car had stopped) and the point of it is to keep momentum to the race rather than a red flag while letting the track get clearly safely.

It's not called the danger car for a reason, fellas...

F1 Fines Sebastian Vettel $5,432 for Riding a Scooter on Track

Sure, more grip would be great, but unless they get up to temperature, they’re way worse than normal tires.