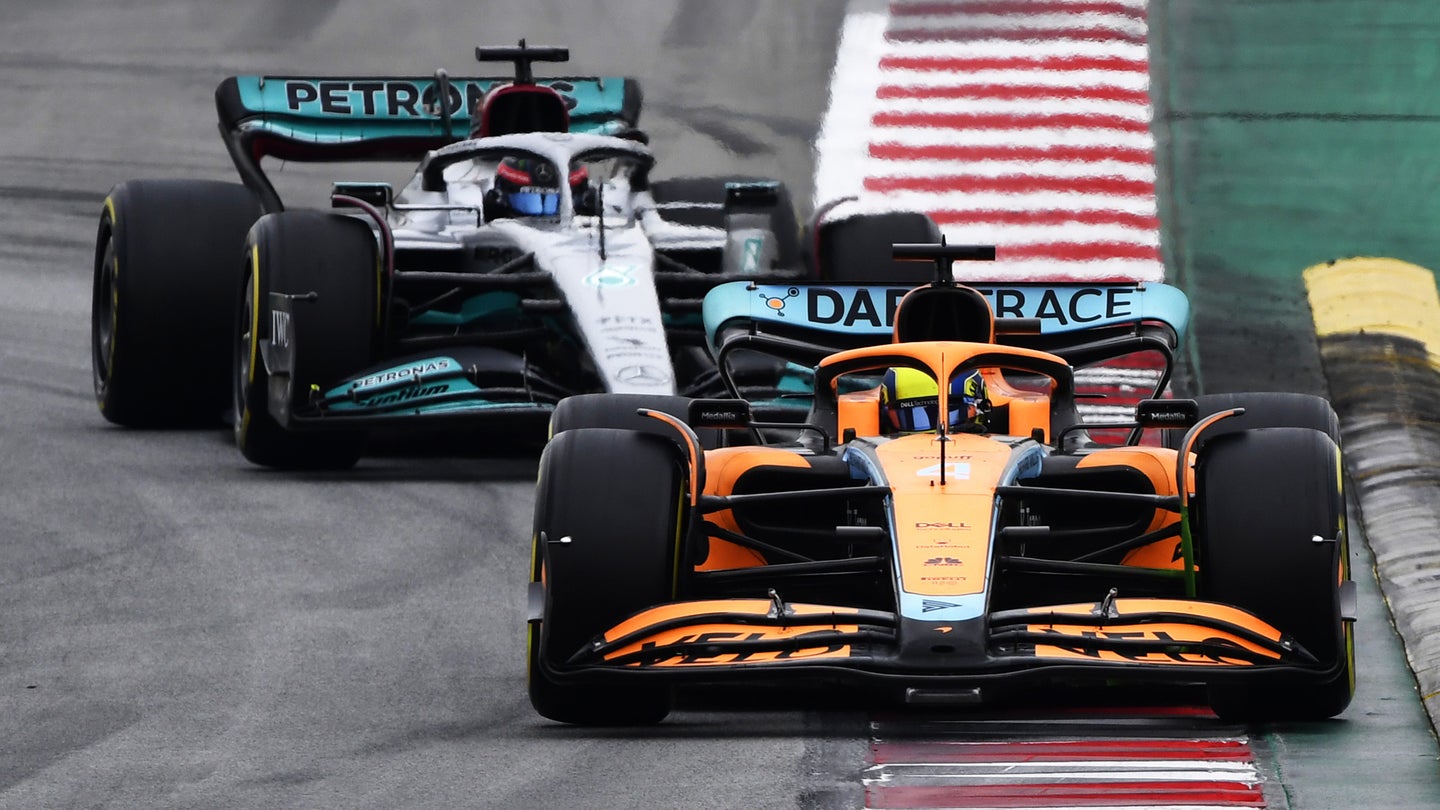 Formula 1's pre-season testing is currently underway, and after three days of running at Circuit Catalunya-Barcelona, there are some tentative early signs that maybe, just maybe, the dirty air problem that's dogged grand prix racing for years may have been fixed by the new regulations.

As you may already know, Formula 1 has changed its rules radically for the 2022 season. But after unveiling an example show car last year, there were concerns the rules had finally got so proscriptive there wouldn't be much difference between what individual teams did to interpret them. Now that we've seen all 10 teams running at Barcelona, they actually look pretty radically different—and it's clear teams have gone for a bunch of approaches when it comes to working out the challenges of 2022.

Unlike IndyCar or Formula E, F1 doesn't run a series-wide chassis. Every team is expected to manufacture or buy their own interpretation of what's permitted in the rulebook. So when there's a major change in the rules, sometimes you end up with everyone converging, as it pretty much happened in 2014 with the shift to the turbo-hybrid era—and other times you end up with a lot of diversity to the way each team tries to get the most out of the guidelines.

During the months leading up to pre-season testing, teams were jealous about guarding their car designs, including a lot of them launching liveries on show car models that didn't actually reveal anything about what they were doing. But once you hit the track, there's no option but to bolt things on and hit the track—even if it means showing others your cards.

Running during a pre-season test doesn't reproduce a grand prix weekend, so it's really hard to say what teams are doing or whether their programs are producing what they want, unless something's obviously going wrong for them, of course. But overall, it does look like F1 might have got this one right—maybe. Cars don't look identical but it does seem like they can follow each other better. A bit of flow-vis testing (a fluorescent liquid that shows how wind reacts to aero) and a wet session during testing on Friday have shown us more about how the new aero's actually working.

Mercedes' George Russell couldn't stop himself grinning when he was asked if cars could follow each other better under the new regulations, even as he tried to downplay whether you could gather much data from the test. Of course, they're not really racing each other, and Barcelona has been the first opportunity to run more than one car on track at once, as F1 teams are limited to running a single car during the filming days they pretend are for marketing, not engineering purposes.

The problem with dirty air has been that cars were designed to use their aerodynamics to force air over the car, therefore sticking it to the track at speed. That makes massive plumes of turbulence behind the rear wing, which then disrupts the aero of the car behind. So unless you somehow have a gigantic speed and horsepower advantage over the car ahead, you lose downforce through the corners and can't out-brake to overtake the car ahead because you run out of speed and grip. So essentially there was a forced distancing of cars if they wanted to be able to, well, work like F1 cars—which is really bad for wheel-to-wheel action.

F1's new regulations drastically trim the side of the cars, removing the array of carbon fiber foils at the edge of the floor that directed airflow around the cars upwards. When downforce was primarily being generated by the front wing, these were massively important for stability, but now with the move to ground effect downforce, with air intended to flow under rather than over the car, the problem should be mostly reduced. In theory, at least.

Obviously, because these are F1 teams there have already been several different approaches to that; Mercedes and Red Bull have very different-looking pieces of carbon fiber along the sides of their cars, which is to be expected. Red Bull's super aggressive, shark-like look shows (via the flow-vis picture above) that airflow is being directed down even on the sides of the cars, being sent along the edge of the chassis and down, rather than spiraling into the air.

Wet running on Friday showed a bit more of how the aero redesign is working. Although there is a huge plume of spray coming off the back of Lando Norris' McLaren, it's almost exclusively off the rear rather than a wall of water coming up and over the car. You can see a clear line of spray from the front to back wheels, which as Lawrence Butcher highlighted in the tweet above is showing water getting wicked away from spraying up on the tires.

In the shot below of Nicholas Latifi in the Williams, you can see it even stronger, the way the water is mostly being sluiced under the bodywork, rather than flung into the air. Hopefully, that not only means there's less of an airflow issue around the cars but that we won't see a repeat of last year's Belgian "race," where the spray was so awful drivers couldn't do anything other than a few laps behind the safety car. The image on the right is Max Verstappen on that Spa weekend and you can clearly see a much bigger spray effect from the front wing onwards.

That doesn't mean F1 has solved its dirty air problem completely or for good, of course. And there are other things, like a persistent front-to-rear rolling motion that cars are experiencing called porpoising, which definitely needs to be fixed. But just maybe, fingers crossed, this has actually been a change for good in terms of the technical regulations.