This formerly-polite retro wagon now has an in-your-face personality. 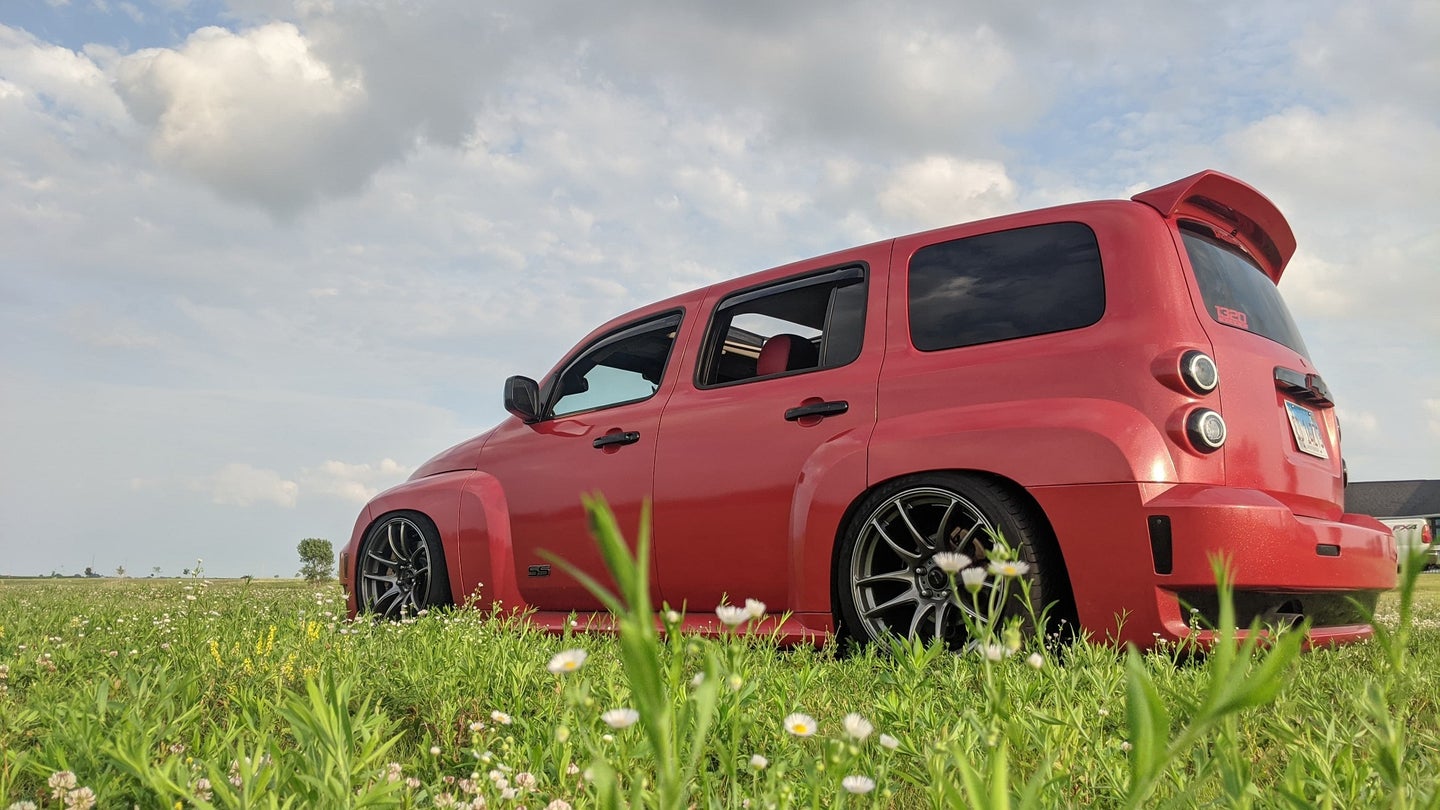 My father bought a brand-new Chevrolet HHR SS in 2009. He liked (and still likes, since it remains his daily driver 11 years later) the 2.0L turbocharged direct-injected four-cylinder with 250 horses and 243 pound-feet of torque.

Lake Villa, Illinois resident Joe Hutchcraft bought a 2009 HHR SS like my dad’s from a guy in Texas and convinced the seller to drive it up to Kansas City. Then Hutchcraft took ownership of the car and put the seller on a plane back to the Lone Star State. This HHR already had an air suspension, and Hutchcraft threw on a Borg Warner s252 turbo as soon as it brought it home. His new-to-him HHR SS also had a manual six-speed f40 transmission swapped in to replace the factory f35 five-speed.

According to Chevy, the HHR was inspired by the 1949 Chevrolet Suburban, and there's a panel version of the HHR that is all Beach Boys-era surfer bliss. Bryan Nesbitt was the lead designer of the also-retro Chrysler PT Cruiser, launched in the early 2000s. He defected to GM in 2001 and is credited with designing the HHR as well, and that retro look is part of what my dad loves about it.

Hutchcraft’s previous vehicle was a 2005 Saturn Ion Red Line, which had a 1.3-liter supercharger on a 2.0-liter engine with a five-speed transmission. He bought the HHR because he’s a father with a four-year-old daughter and a two-year-old son; the two-door Saturn just wasn’t cutting it anymore. He pulled the wheels from it and installed them on the HHR, and a set of slicks are on the way. He says he runs the turbo on 23 psi since it’s a stock motor.

The HHR got a whole lot of nips and tucks, including a new bonnet made from a ZL1 Camaro hood insert, and Hutchcraft also made a new grill, eyelids, spoiler, splitter, and side skirt extensions for it. He’s in the process of constructing a new rear bumper and wrapping some of the interior elements in suede.

The Chevy has a ZZP high-pressure fuel pump, plus new injectors, charge piping, intercooler, three-inch stainless exhaust from the turbo back.  Along with the turbo, Hutchcraft added a knockoff TiAL blow-off valve to release pressure on the engine and to give it an enhanced growl. It also has a hood-dumped external wastegate.

But the coolest feature, in my opinion, is the airlift 3P suspension, which Hutchcraft can control via Bluetooth on his smartphone. Dad says his HHR rides perfectly on smooth roads but he can feel every bump if it’s not, so I’m thinking I should convince my mom to chip in with me and get him a new suspension for his birthday. After all of the body modifications, Hutchcraft’s HHR SS is even lower to the ground than it was originally, so the airlift is a necessity versus a nice-to-have accessory.

Hutchcraft is planning to take his HHR SS to the track in 2021 to see what it can do. With that glittery wrap and blow-off valve, you can’t miss it.

Will It Boost? Watch These Guys Feed Random Objects Into an Open 88mm Turbo

It’s a rare beast, but the HHR SS didn’t even sell for that much when new.