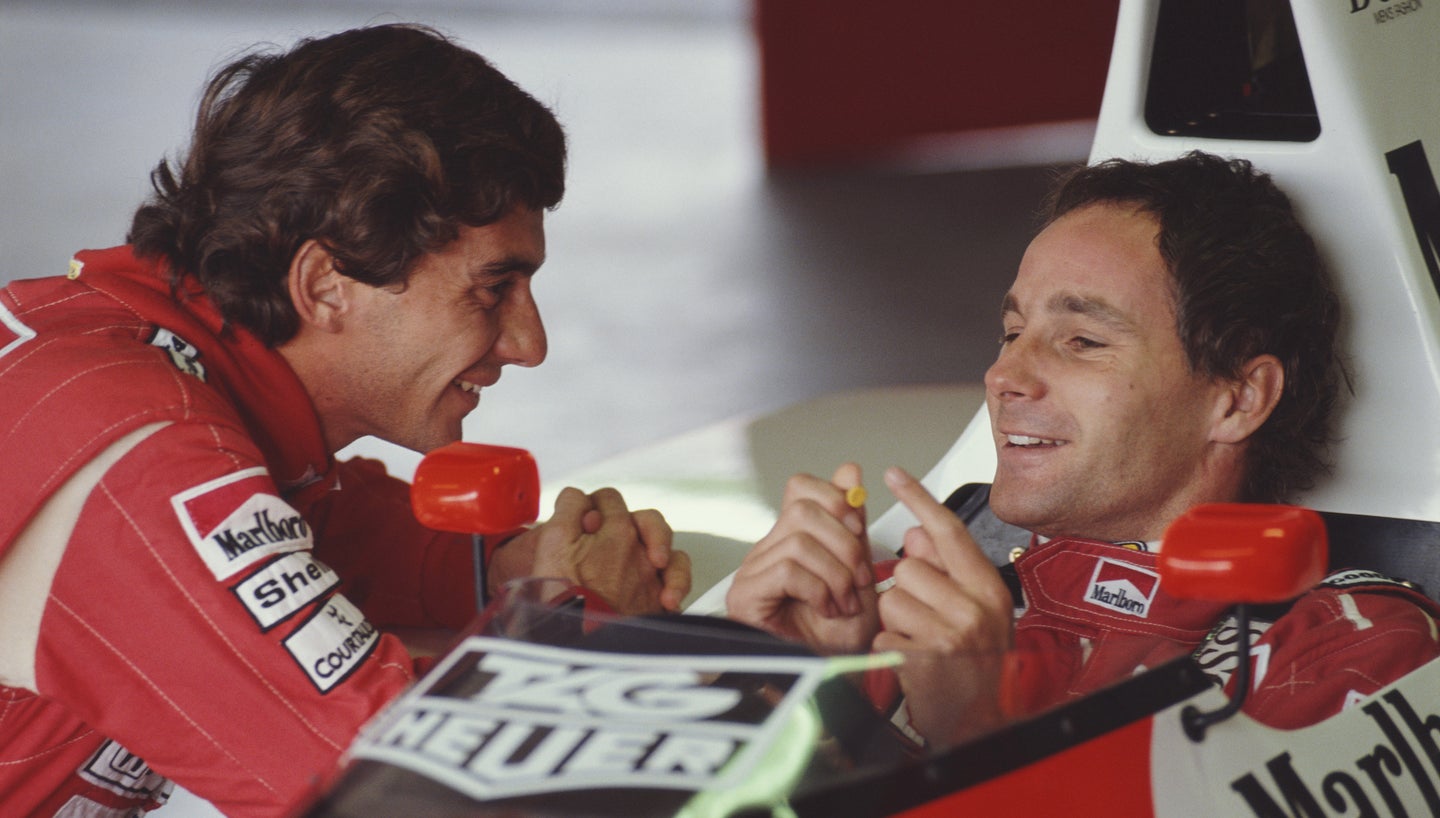 Ayrton Senna da Silva impacted Tamburello corner while piloting his Williams-Renault FW16 Formula 1 race car at over 185 miles per hour on Sunday, May 1, 1994, during the San Marino Grand Prix. The moments that followed the crash will undoubtedly be remembered as some of the saddest, and perhaps the most controversial happenings in the history of motorsport. Had Senna listened to his friends, family, or even F1 doctor Professor Sid Watkins, he wouldn't have raced on that ill-fated Sunday at the Autodromo Enzo e Dino Ferrari. Had Senna not requested last-minute changes be made to the steering wheel position, which prompted adjustments to the steering column, he would've most likely walked away from that crash. And according to a recent interview with his former McLaren teammate Gerhard Berger, had Senna and Berger looked deeper into repositioning Tamburello years prior to his crash, the feisty Brazilian would most likely be alive today.

Today, 25 years after the fatal crash of one of the most talented, personable, and loved Formula 1 drivers in history, a report by the Independent reminds us of the series of minuscule events that ultimately led to Senna's death. Furthermore, accounts shared by Berger depict a smiling Senna on the grid of what would be his final F1 start. This last bit comes as a surprise to someone who has read all the books, examined all the reports, and glossed over every bit of Senna history throughout the years. Those who had contact with Senna the morning of May 1 have always claimed that the three-time world champion appeared uneasy, upset, and that he made it clear he didn't want to race. Let's not forget, this was just two days after Rubens Barrichello suffered a massive collision that saw him fly through the air and land upside down on a gravel trap, and less than 24 hours after fellow driver Roland Ratzenberger had died as a result of a nasty crash. Nevertheless, now it appears that Senna, perhaps, found some inner peace before firing up his engine one last time.

"I remember looking at him, and he was laughing underneath his helmet," Berger told the Independent. "He had always been happy when something good was happening to me. That was my last eye contact with him."

Allegedly, Senna was happy that Berger was starting from a good position on the grid, and that like most Ferrari drivers do when surrounded by Italians, Berger was cheered on by the Tifosi nearby. From that moment on, Berger had a first-row seat to Senna's unraveling.

"We started the race and Michael Schumacher was behind Ayrton, and I was behind Michael. I remember exactly when Ayrton started to go off the track," Berger said. "He crashed, and I thought he had hit the wall at a good angle and there would be no problem. They stopped the race and I saw Bernie Ecclestone who said Ayrton was out of the car. I thought that meant he was okay so didn’t ask anything else about it and restarted the race as usual."

After retiring on lap 16 of the race, Berger says he was informed that Senna's situation wasn't good. Shortly thereafter he chartered a helicopter to Bologna to visit the hospital where he had been airlifted.

"Professor Sid Watkins, the Formula 1 doctor, was there [at the hospital] and told me it didn’t look good, but asked if I wanted to see him in the operation room."

"I went in and they were doing something with his head as it was covered, but he was already dead. We stood in front of him for a while and then we left. Immediately after this it was confirmed he had died," said Berger.

As revealing as Berger's account is, Senna laying lifeless on an operating table is the end to a story that began in 1989, when Berger himself suffered a big shunt at Tamburello in Imola during an F1 race weekend. According to the Austrian driver, Senna joined him at Imola during pre-season testing in 1990 to inspect Tamburello and find out if it could be made safer.

"I said ‘Ayrton, we need to move this wall because one day somebody is going to die there’. He agreed," said Berger. "The next time we were at Imola we went to see what we could do about it. I remember it like it was yesterday."

"At lunch, Ayrton and I walked out from the pit-lane and down to the Tamburello corner. We looked over the wall and behind it there is a river. We both looked at each other, and said there isn’t anything we can do. There is no space behind the wall, we didn’t think about putting in a chicane to slow the cars down, and we just accepted it for what it was. So, we walked back and didn’t do anything."