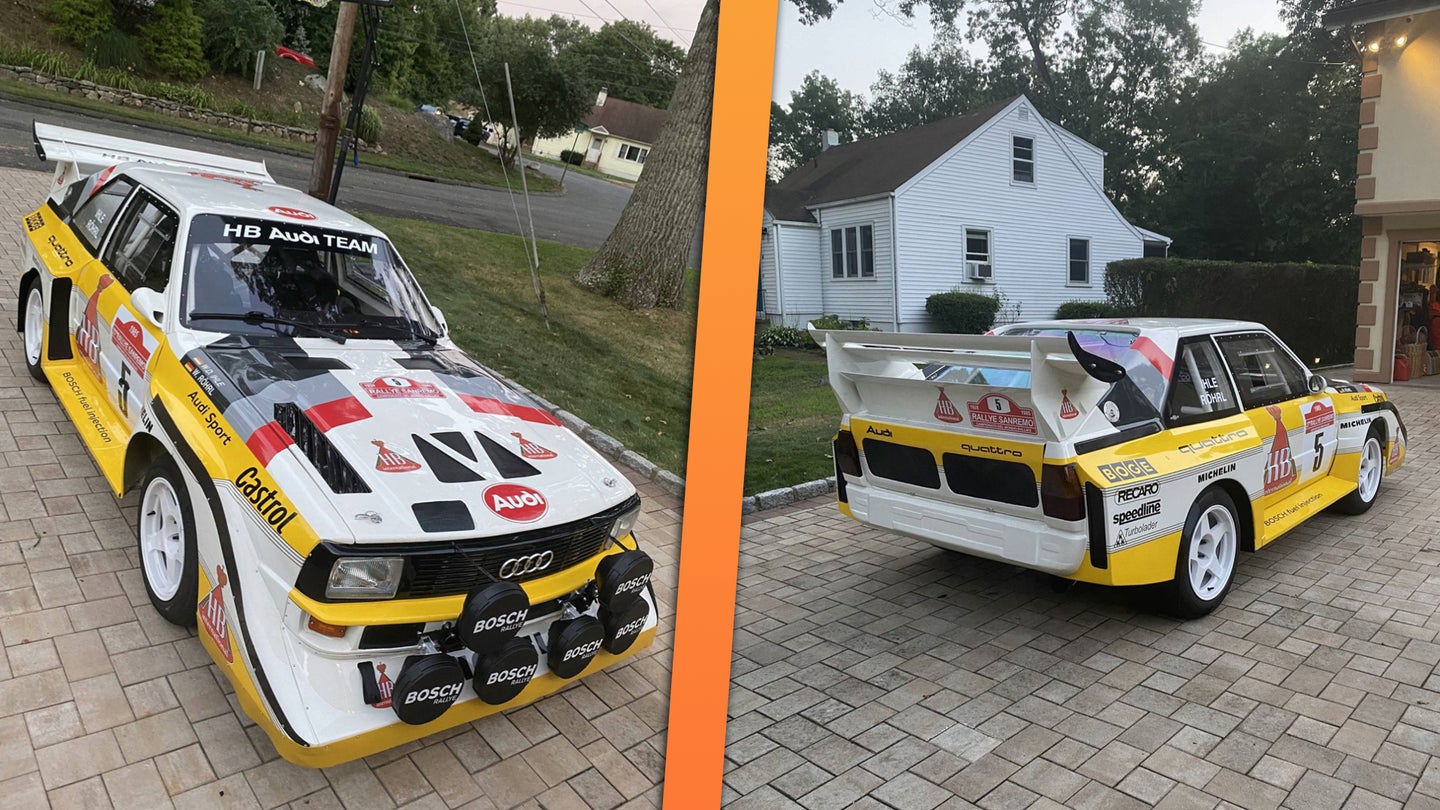 There's a wise piece of advice in motorsport: Never race anything you're not prepared to lose.

Some of us don't have this qualm about any race cars. Racing them is what you're supposed to do. Yet some folks cringe at the possibility of writing off some of the most legendary cars from racing's history, like those from rallying's infamous Group B era. So, why not race the next best thing?

Up for sale on Hemmings right now is a 1986 Audi Sport Quattro Coupe S1 E2 replica, built to look like the legendary race car that made all-wheel-drive a must-have in top-level rallying after a streak of domination.

The first Quattro rally car debuted in 1980, and the S1 E2 was a 1985 update with more power, improved power delivery and upgraded aerodynamics. It competed not just in stage rally, but at the Pikes Peak International Hill Climb—racking up wins in both.

The original version of this car weighed 2,403 lbs (not bad considering all of the trick AWD tech) and had a 2.1-liter inline-five engine that put 473 horsepower to the wheels, according to official figures cited in the listing. The real party trick for the S1 E2 was its turbo's new recirculating air system that kept the turbo spinning so the engine could produce its full power as soon as you got back on the throttle. It was all about less lag and more speed.

Sadly, the S1 E2 was Audi's last Group B car ever made—and a real one might make even the hardest of "race everything" fans a bit sad to see crashed. That's the beauty of this replica, though. It's not the real thing, and you can absolutely send it as hard and as often as you please.

Pictured in what appears to be a nondescript neighborhood driveway (what? I'd daily it, too) is this 1986 Audi Sport Quattro Coupe S1 E2 tribute car, which seamlessly blended an Audi 80 sedan front into a Quattro Coupe rear end to look as close to the original short-wheelbase Quattro race cars as possible.

We're not sure how close this replica's power output is to the original mid-eighties race car, as the seller lists an unusual measure of "600 ehp" and "550 enm" for horsepower and torque, respectively. We're assuming this refers to power and torque at the engine or crank, not at the wheels as the real S1 E2's official stats list. Either way, that sounds close enough to be a blast.

You can peruse the full build spec sheet on the Hemmings ad here, which includes a 60-mm Turbonetics T3 turbo, a 46-mm Precision Turbo wastegate, close-ratio six-speed sequential racing transmission, Bilstein rally suspension built by Sellholm Tuning, Audi S8 brake caliper, a hydraulic handbrake, a full FIA-spec roll cage, six Bosch accessory lights and full kevlar doors and roof. It even rides on beautifully period-correct Compomotive S1 wheels. It's slightly lighter than the original, too, coming in at just 2,315 lbs with its driver and codriver inside.

According to the seller, the car was built for hill climbs, time attacks and sprints. That's exactly what it deserves to keep doing. At $180,000, it's not cheap, but living your dreams usually isn't.