This Driverless Semi-Truck Parks Itself If Systems Fail

The fallback system monitors truck hardware and software, automatically pulling it over if something goes wrong. 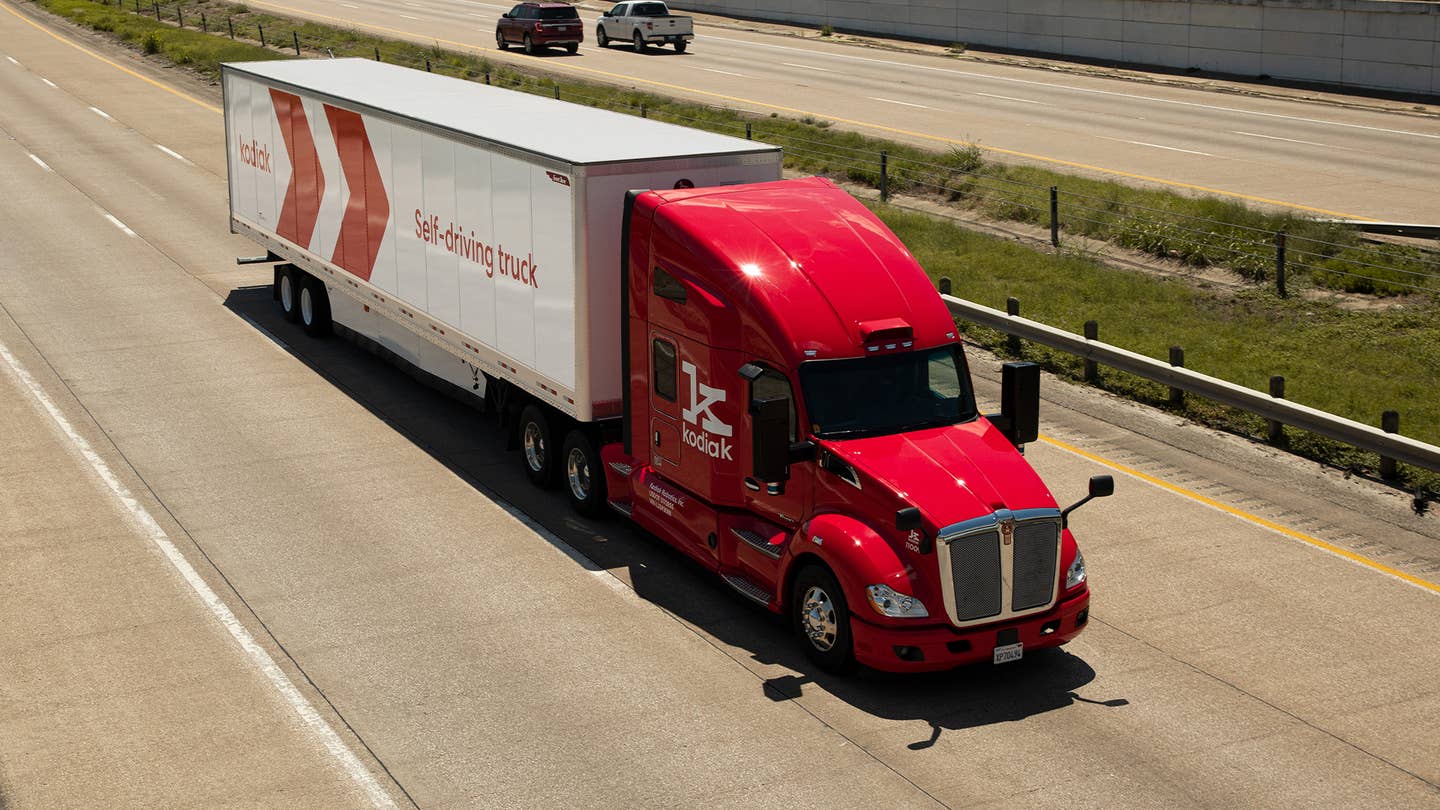 As the world readies itself for self-driving vehicles on its roadways, one of the biggest concerns on everyone's mind is safety. After all, sharing the road with autonomous vehicles can be a bit daunting to people who don't exactly trust computers. And it's not just passenger cars gearing up for an autonomous future, either; there are plenty of companies launching fleets of self-driving tractor-trailers. That includes startups like Kodiak Robotics.

On Thursday, Kodiak took one more step toward putting minds at ease. The California tech firm claims to have become the first to demonstrate a built-in fallback should equipment fail during an autonomous trip.

In the video above, one of Kodiak's trucks can be seen traveling down the highway at 65 miles per hour in the right-most lane. An occupant inside the truck (but not at the wheel) cuts a cable to simulate a sudden loss of communication between the truck and its main computer. That's when Kodiak's Actuation Control Engine kicks in. ACE is Kodiak's fallback system which enables the truck to safely pull over to the side of the road when it notices a crucial system failure. In this circumstance, ACE recognizes the interruption from the cut cable and plots a lane path ahead of the truck to move onto the shoulder and begins to brake.

“To launch an autonomous vehicle without a human driver, you must ensure the vehicle will protect motorists in the case of a truck or autonomous system failure,” said Kodiak's Founder and CEO, Don Burnette. “Implementing a fallback system is a fundamental necessity to achieving that level of safety. We are the first autonomous trucking company to demonstrate this capability on public roads. We have integrated fallback technology into the Kodiak Driver’s architecture from the beginning—it would be incredibly hard to add this capability as an afterthought.”

Kodiak says that the ACE monitors more than 1,000 processes and underlying vehicle components while the truck is in motion, as often as 10 times per second—this includes engine parameters, oil level, tire pressure, and more. The hardware is able to detect when one of these components fails or responds outside of the expected parameters and will immediately begin executing a fallback plan automatically.

Burnette told The Drive that in the event that a road doesn't have a shoulder, the truck will pull over as far as it can while still avoiding obstacles like parked cars or overhanging trees. If the truck is unable to pull over at all, it would engage its hazard lights and continue to find and execute an alternative safety plan to pull off of the road. The same goes for a highway or smaller local roadway that the truck might be traveling on.

Kodiak isn't the only company out there looking to automate the trucking industry—there's also Waymo, Aurora, TuSimple, and plenty of other startups to name. However, Kodiak does boast that it is the first such company to demonstrate such a failsafe system on public roads. Being first in this industry is a big advantage, especially given the potential to supply more than half a million trucking companies with what could potentially be driverless money printers. But more importantly, being safe could prove to be the real winner in this scenario as the race to market heats up in the coming years.