Who needs a blower when you’ve got wicked race engine mods like this? 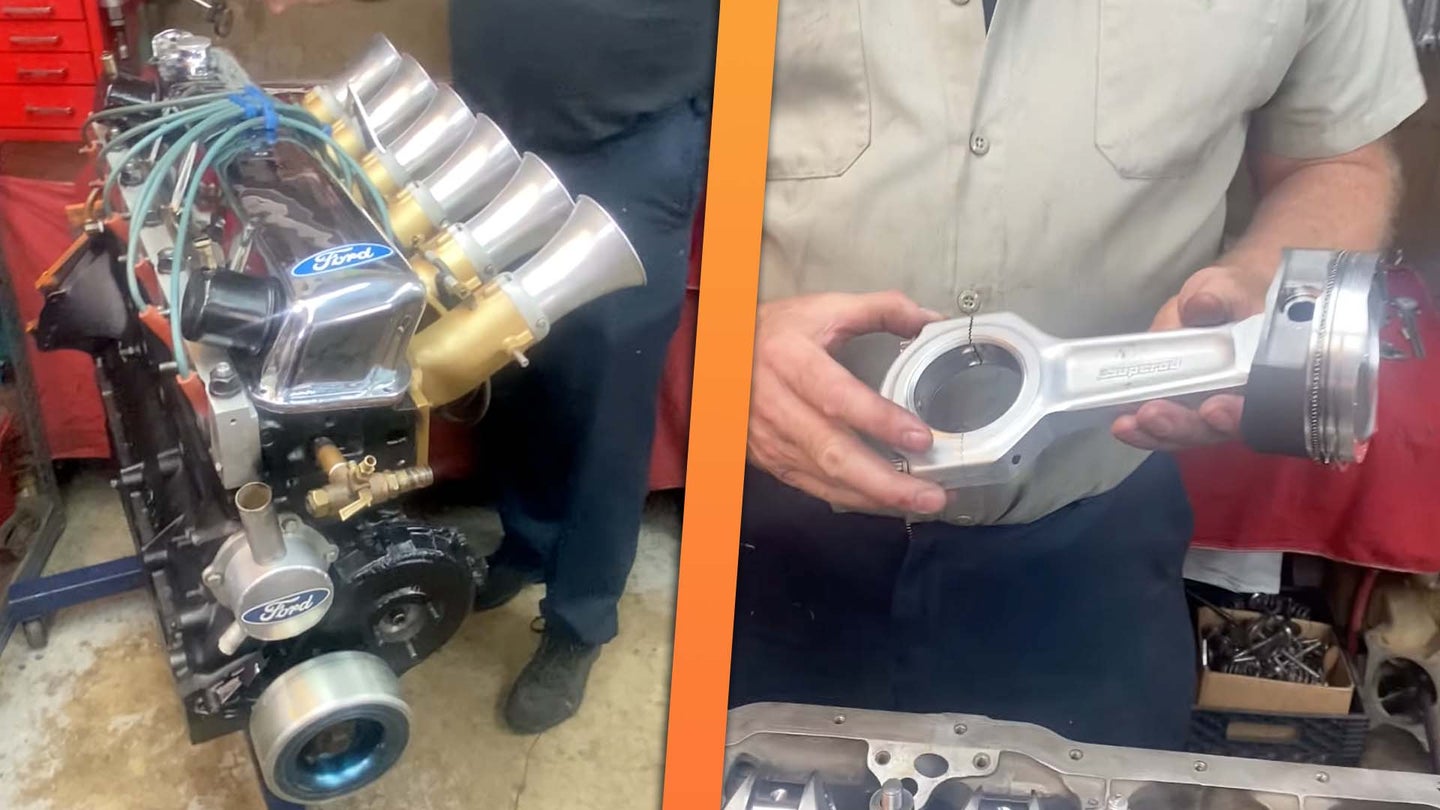 Pushrod V8s dominated the American automotive performance scene in the 20th century, and they arguably still do today. Hot rodders have been modifying and hopping them up for decades, but there have always been other options. With far less aftermarket support, inline-six cylinders haven't historically gotten a lot of love in the U.S. However, that doesn't mean there aren't any ambitious builders who've modified the pedestrian motors into serious firebreathers; truly impressive engines like the "Boss 300" we see here.

An amalgamation of parts and homebrew engineering that has its roots in the 1970s, the Boss 300 is a rare, non-OEM engine based on the tried and true Ford 300. The 4.9-liter inline-six with a gear-driven valvetrain was found in a ton of vehicles from the Blue Oval; this one, though, is unlikely almost any other.

Reportedly designed by a drag racer and tinkerer named Sherman Sligh, the Boss 300 is engine design gone mad. Bored out 70-thousandths to 310 cubic inches and with a laundry list of modifications, this pushrod, naturally aspirated, 5.1-liter inline-six allegedly makes 625 horsepower. That's more than two horsepower per cubic inch, and even more horsepower per liter than the rev-happy F20C found in the USDM Honda S2000.

One of these motors has been rebuilt by Ken Ellison, a popular engine builder with a large following on social media. According to him, it's one of around 50 built, and its secret sauce revealed itself as the rebuild process took place.

Let's cut to the chase on the wild mods; first of all, this does not have the stock head. It's a custom unit made by joining six separate segments from Boss 302 heads together. Apparently, the bore spacing is different, so the sections had to be individually cut up, welded, and epoxied back together before finally being bolted back onto the motor itself. That's not it, though.

On top of making a whole new head, the exhaust side of this new combination was further modified to increase flow. Most of the regular exhaust port area was milled away, and a plate with a raised port was installed in its place. With a clearer shot to the back of the valve, the exhaust flow was greatly increased, and interesting steps were taken on the intake to boost power as well. Instead of porting out the runners, they were partially filled in. This, according to Ellison, is in order to increase the air velocity down the port in an attempt to increase cylinder filling.

In addition to all of the port work, the valves are changed as well. The intake and exhaust valves are both titanium. Closed with help from triple-nested valve springs, the intake valve measures a massive 2.25 inches, and the exhaust comes in at an equally impressive 1.71 inches. They're opened by, bizarrely, two-piece pushrods that ride on roller lifters. Camshaft specifications aren't mentioned; however, the valvetrain features lightweight aluminum rocker arms and stud girdles to keep flex under control.

The bottom end has a 4340 forged steel crankshaft with a four-inch stoke, connected up to heavy-duty forged aluminum rods and forged aluminum pistons from JE, enabling 13:1 compression. The high-compression pistons themselves are "gas ported," meaning they feature tiny holes that are milled through the crown of the piston, down behind the compression ring. On the compression and power strokes, the pressure within the combustion chamber flows through these tiny orifices, pushing the compression ring against the cylinder wall and enabling better sealing. And speaking of sealing wizardry, the block's deck is milled to accept round wire inserts around the combustion chamber. These inserts sit below the head gasket itself and also provide greater sealing when the whole ordeal gets torqued down.

This creation, more reminiscent of something cooked up by Dr. Frankenstein, is then topped with Enderle Fuel Injection. Big intake trumpets complete the picture, and although the engine isn't put on a dyno in any of the videos released by Ellison, it definitely screams up at high rpm to make the sort of power that's claimed.

The engine allegedly set a world record in the NHRA's Competition Eliminator class in 1970. According to Ellison, it powered an altered wheelbase car down the quarter-mile in just 9.2 seconds. It also saw use outside of drag racing. Apparently, engines with similar modifications were used in circle track racing as well with great success before allegedly being banned at several venues due to their potency.

The plan for this engine is apparently to put it back in the car it was found in, which has been parked since 2000. It's not specified what sort of vehicle it is, but needless to say, whatever this engine ends up in, it'll be a piece of hot rodding history. Just like a motor that helped crank over an SR-71, it's a seriously cool conversation piece that we can't wait to hear fire up.

The ZZ632 is 10.4 liters of naturally aspirated, American fury.

Turbo Godzilla sounds both like an ’80s monster movie and a good reason to hold off on buying a Ram 1500 TRX.