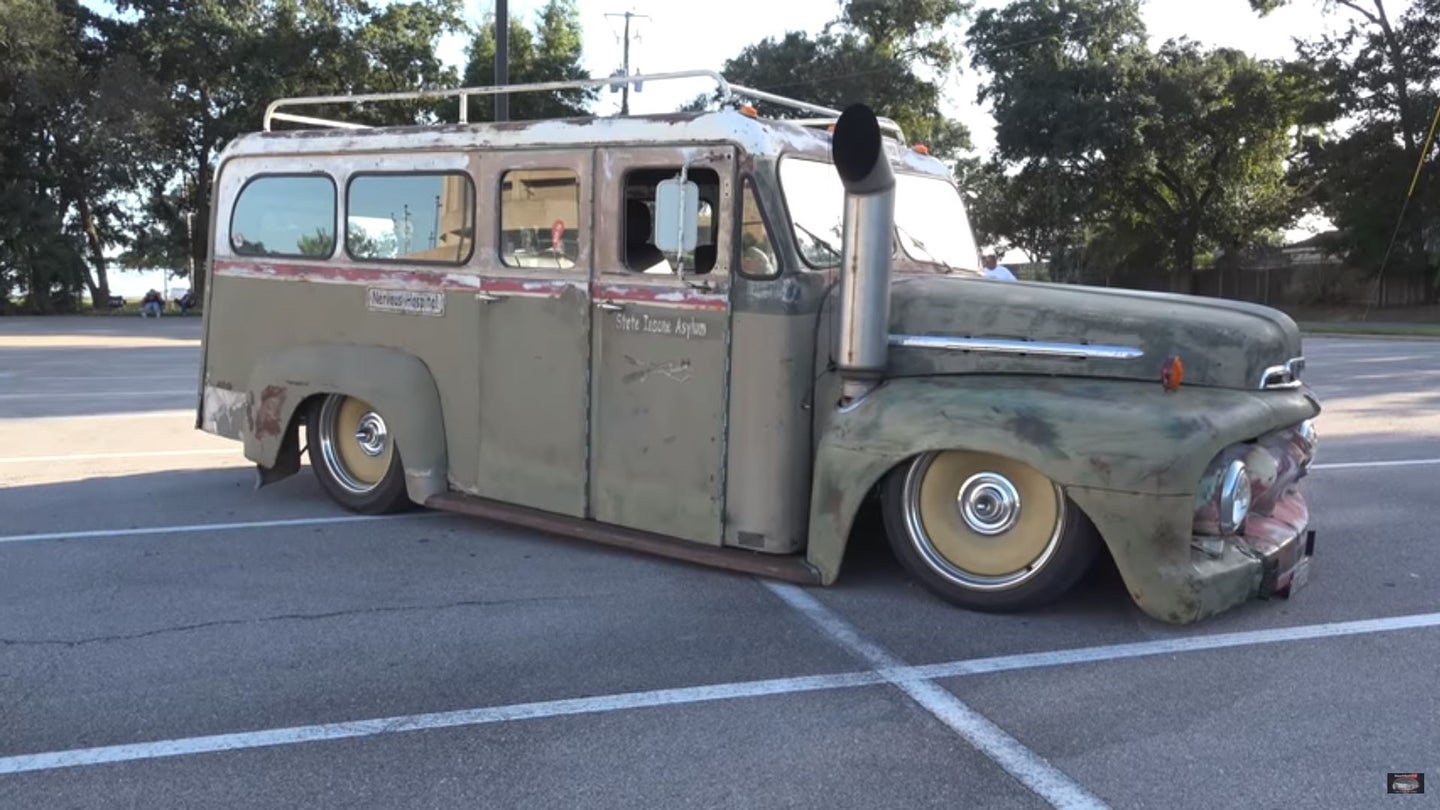 What better way to prepare for Halloween than with a scary old rat rod wagon made for transporting crazy people? Shelbyville, Tennessee-based Street Rods by Michael has created what they call the Straight Jacket Express out of an old 1951 Ford Stewart Safetymaster wagon. It was found in Arizona and its original use was transporting mental patients to a New Mexico insane asylum

The body was built by a Brooklyn, NY-based company called Stewart which specialized in armored vehicles and it sits on a Ford F2 frame. This body is what Stewart called the Safetymaster. Tom, one of the guys who built it, describes the Safetymaster body in the video below as “an armored car that they put windows in.” It’s not quite a van and not quite a bus which is why it’s officially classified as a wagon, which seems accurate considering it was designed just for transporting people.

In the long list of modifications of this rat rod, let’s start with the engine. It’s a Cummins 6BT diesel inline-six with smokestack exhaust that makes “somewhere between 500 and 600 horsepower” because Street Rods “did a few things to the head and the top end.” The wagon sits on adjustable RideTech air suspension not just to look cool, but because it gives the Straight Jacket Express a smooth, comfortable ride.

The body of the Straight Jacket Express has mostly genuine wear with some fake patina here and there that’s almost impossible to notice. Some of these body panels are brand new but made to look old to match the rest of the wagon. Street Rods did a fantastic job giving this project just the right amount of wear to look cool.

On the inside, it’s been modernized with amenities like a modern stereo, reclining seats, air conditioning, cruise control, and a tilt steering wheel. That might not sound that fancy, but those things sure make a vehicle from 1951 easier to live with and drive around on a regular basis.

Check out the video below to hear the full story and get a detailed look at the Straight Jacket Express.

All of the proceeds from this off-road pony car will go to the Juvenile Diabetes Research Foundation.