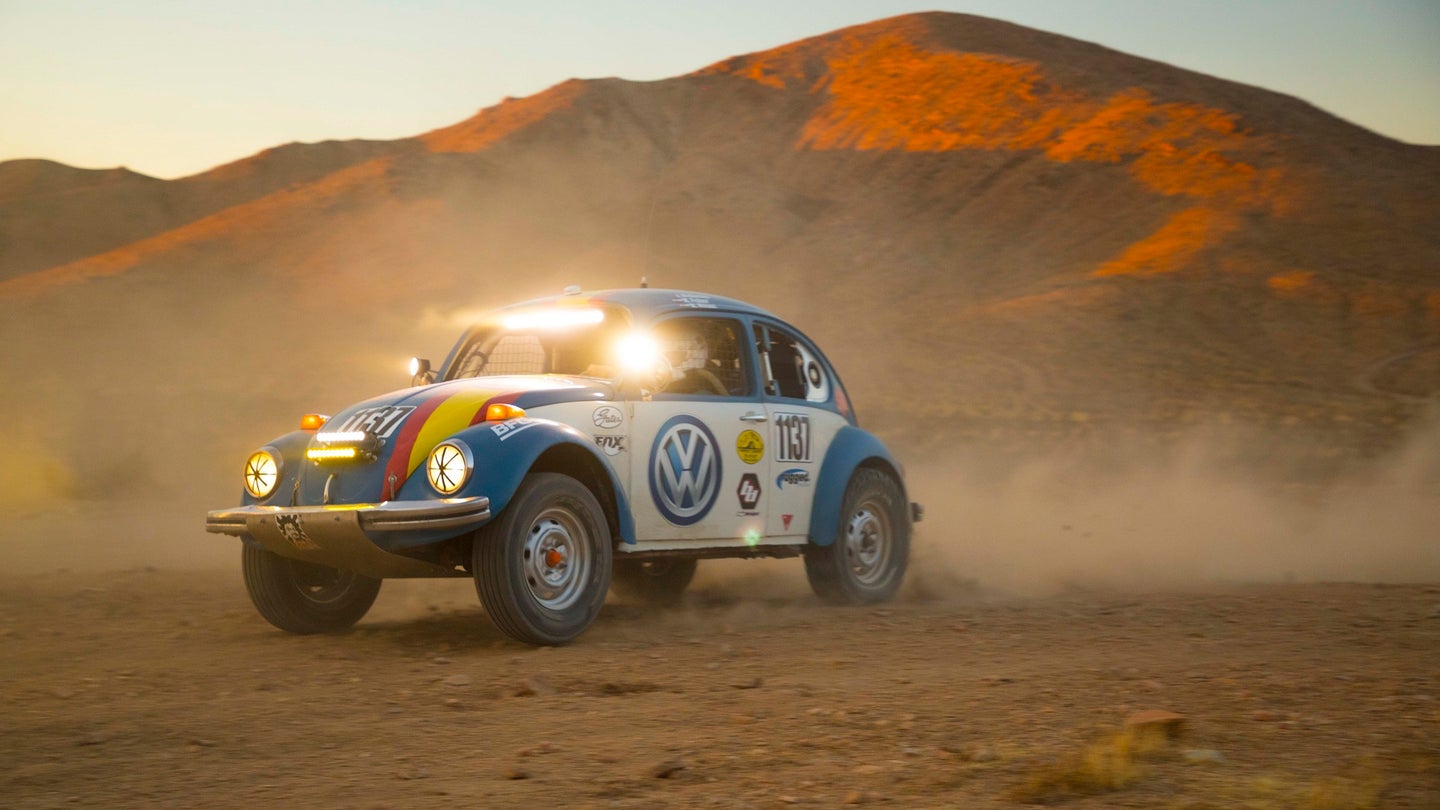 Volkswagen is known for dominating Red Bull Global Rallycross, with the Volkswagen Andretti Rallycross Team's highly modified Beetles winning both the driver and manufacturer championships for the past three years. On Monday Volkswagen announced its sponsorship of a rather different kind of dirt racing Beetle, the 1970 Class 11 car of Josh McGuckin and ProjectBaja.com for this year's running of the Baja 1000.

Volkswagen is inextricably linked with the Baja 1000. Having started as a motorcycle race, Bruce Meyers entered a Meyers Manx, a dune buggy kit based on the Beetle, to compete in what was then called the "Mexican 1000 Rally" in 1967. It proceeded to beat the current record time for the bikes This not only helped the "Baja Bug" explode in popularity but proved that despite its meager roots the Bug has some good racing potential.

Today the Baja 1000 offers Class 11, a class dedicated to the classic Beetle. Comparatively few modifications are allowed in Class 11 compared to the trophy trucks and other vehicles that compete in the Baja 1000. McGuckin's car has upgraded shocks and springs, but the basic suspension design remains the same as the original car. Beefier BF Goodrich all-terrain tires replace street tires, but they must still fit on the original narrow steel wheels. All Class 11 cars use the 1.6-liter flat-4 engine—no Porsche engines or LS swaps here. Of course, the car has all of the necessary modern safety equipment, but functionally its modifications for attacking the desert are quite minimal.

McGuckin and his team first entered the Baja 1000 in 2014 but failed to finish. This year, with VW's backing for the 50th anniversary of Bruce Meyers' entry, the team hopes to complete the 1,134-mile race from Ensenada to La Paz, Mexico, and show what the spunky little Beetle still has.

With VW's winning ways in Red Bull GRC, as well as its excellent performance in the World Rally Championship until withdrawing last year, it's great to see the company supporting a smaller effort as well. The Class 11 Beetles are also giving me some ideas for future tweaks to our Jetta Ute...

Buy This Subaru STI-Powered 1965 Volkswagen Beetle Before We Do

This German-market Bug has been upgraded in every way, including Subaru STI power.

This Brat/Beetle Crossbreed Can Be Yours for Just $7,000

In case you love flat-four engines and four-wheel-drive, but can’t afford a WRX.

This Couple Drove Across the Planet in a VW Beetle (Twice)

The only thing better than an epic road trip is doing it with someone you love.