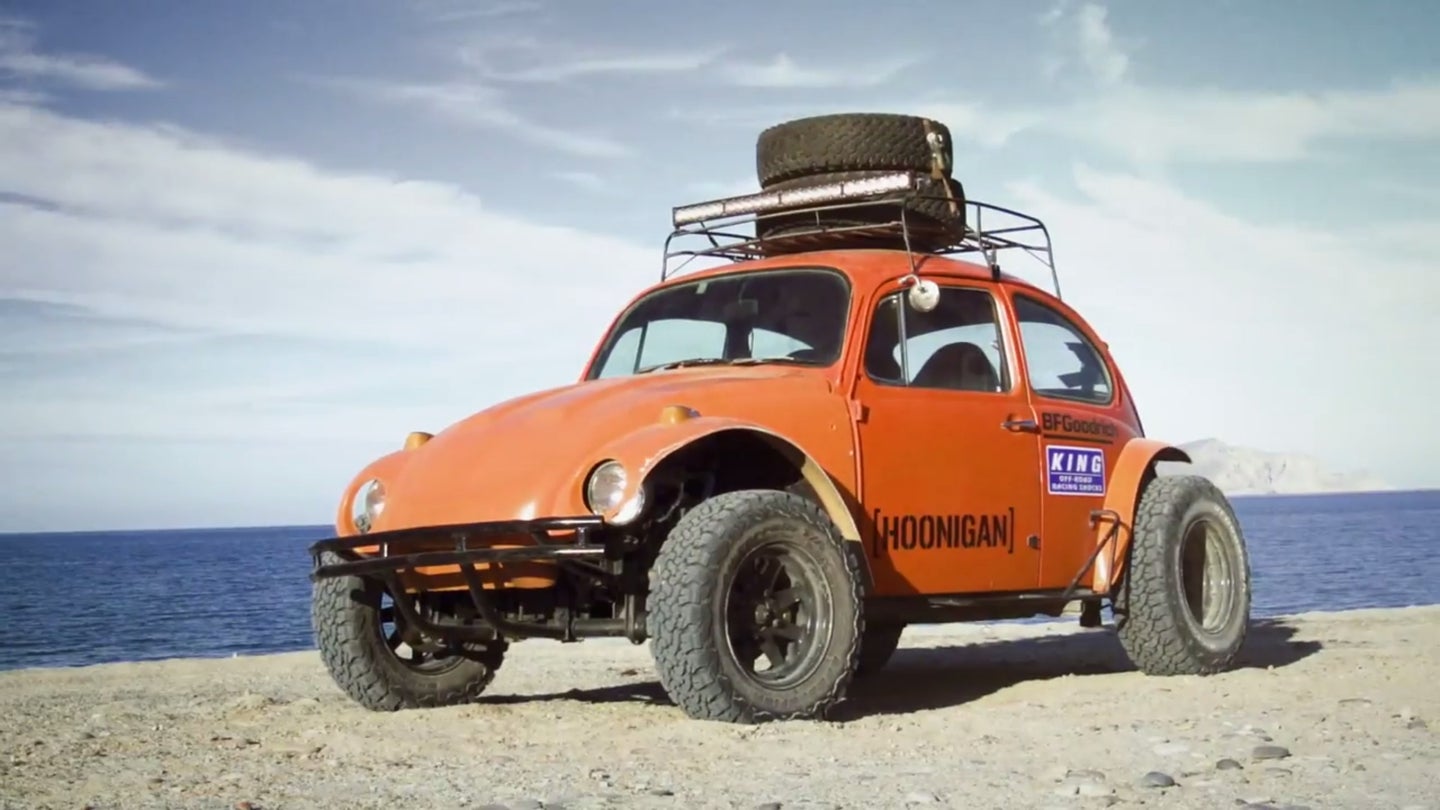 Hoonigan recently debuted its new project car on an episode of Daily Transmission—“the ScumBug”. The car, a Volkswagen Beetle, cost a mere $2,500 and was purchased with one goal in mind. The goal was to follow the Baja 1000 on the race's chase roads. The Hoonigan crew featured their journey to Mexico with the ScumBug in last week's episode of Field Trip, and this week, they finished their coverage.

In Part 1 of the Hoonigan crews Baja adventure, the crew showed the beginning and the failing of multiple planning stages of their trip. The crew eventually makes it to Ensenada, Mexico where the start line for the Baja 1000 is located. Hoonigan co-founder Brian Scotto called it “lawless” because race trucks are just driving around in the streets with normal traffic.

Many friends of Hoonigan cameo in the video like Jessi Combs who was going to “ironwoman” the Baja 1000. Ironwoman (or Ironman) is when you attempt the race by yourself with no driver change. World-renowned automotive photographer Larry Chen pops up in a portion of the video as well. If you want to see how a photographer of his caliber tackles the world's most famous off-road race, check out Hoonigan’s Daily Transmission Tangent episode on his time in Baja. Driver Casey Currie showed off his race truck and conveyed the Baja 1000’s best-hidden secret—the free pits. If you run BFGoodrich tires you can utilize the BFGoodrich pits for free.

The Scumbug faired well considering the conditions. The Hoonigan crew had to cut the fenders and they attempted to install Fox Racing shocks they got for a friend that are probably worth more than the car.

Part 1 ended with the Hoonigan crew camping on the side of a highway road that was part of the race route.

Part 2 of the Hoonigan's Baja 1000 Field Trip began with the trophy trucks beginning to fly by at speed including friend of Hoonigan driver BJ Baldwin.

The Hoonigan crew drove up to the first BFGoodrich pit to watch the racers begin to work on their cars. They took note of the tools at the pit including an endless supply of impact wrenches, grinders, and hammers. They got to see drivers Jessi Combs and Casey Currie who they chatted with in Part 1 while they visited the pit.

The Part 2 video shows a great behind the scenes of chasing the Baja 1000. Originally, the Hoonigan crew was planning on following Bill Caswell, but he did not arrive to the race in time, so the Hoonigans borrowed his race book and went on their adventure.

The ScumBug fared well considering it was driving on roads that few hundred thousand dollar trophy trucks have trouble with. The steering wheel needed to be screwed on while driving and at one point it came completely off.

The video shows the Hoonigans watching the race, the beautiful beach side camping locations, and fun they had bombing around in the desert terrain. Check out Hoonigans Part 2 video of their Baja 1000 Field Trip below.