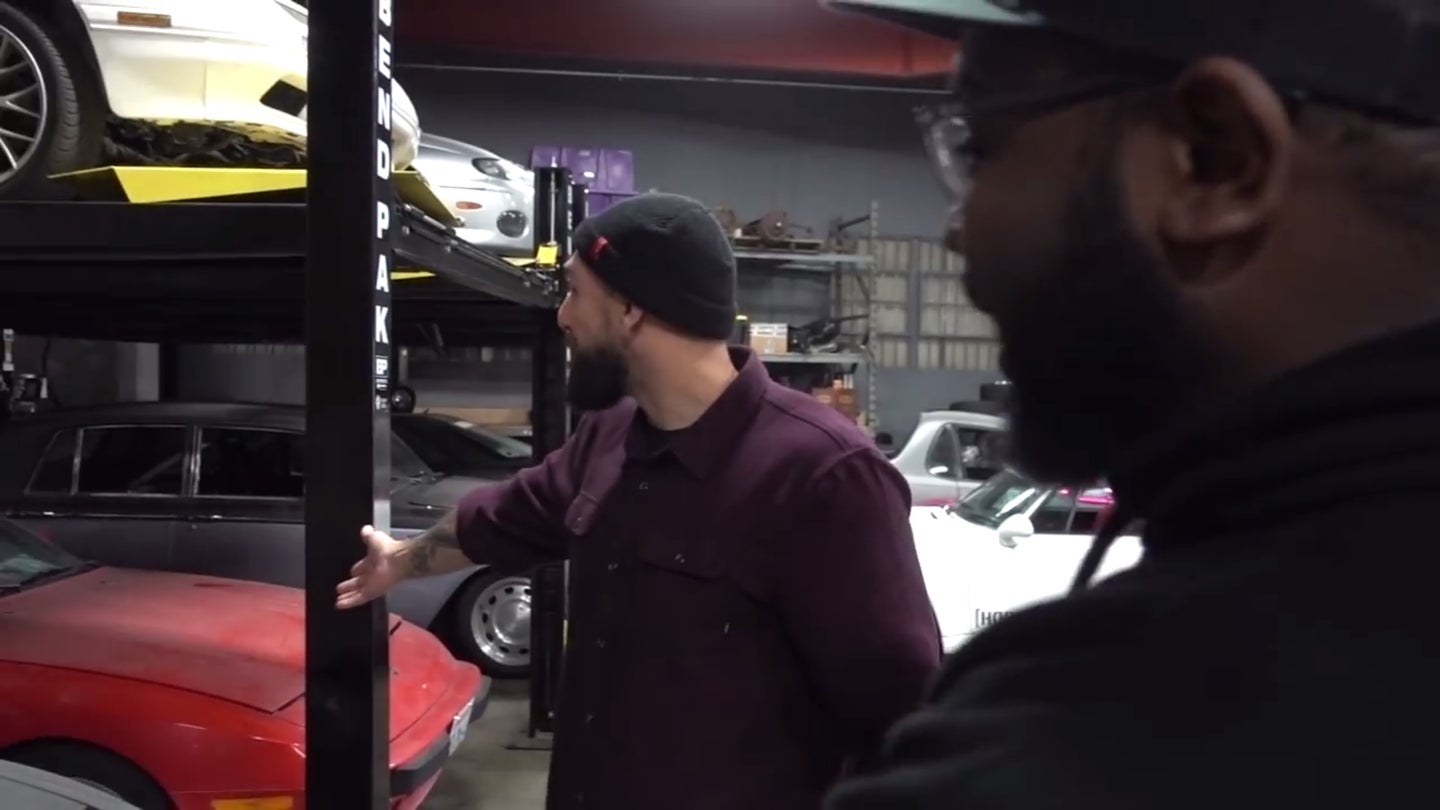 Hoonigan has put out a steady wave of content during the last year specifically for the series Daily Transmission. With more than 200 videos and millions of views showing you the inner workings of Hoonigan's headquarters, the Donut Garage. In many episodes, there are cars in the background shots, but not talked about on camera. For the most recent episode of Daily Transmission, a few of the Hoonigan crew take you through the Donut Garage and talks about every car on its premises.

A lot of the cars follow the long-standing joke and the hazing of Hoonigan co-founder Brian Scotto, "Is it Brian's? Does it Run?" because Scotto apparently collects a lot of vehicles and they never run. His "way of life" has supposedly rubbed off on his wife, Ashley Scotto, as the first car they chat about is her Porsche 944 build. The car has been painted, has a wide body kit to be added to it, and even has a donor parts car parked next to it.

As the Hoonigan crew goes through the cars, some are stars of other Daily Transmission episodes and some of Hoongain's sister series Field Trip such as Hoonigan's ScumBug which they took to Mexico to follow the 2017 Baja 1000. Perhaps one of Hoonigan's best-looking cars is Brian Scotto's Porsche 911 Turbo Rauh-Welt Begriff build which was featured way back in episode 39 of Daily Transmission where Scotto did some burnouts and broke his car. Another oddity is the 1978 Rolls Royce Silver Shadow. The Silver Shadow was featured on the one-off Discovery Channel show Car Saviors. On that show, Scotto along with race car driver Andrew Comrie-Picard put a 6.4-liter Hemi V8 engine in the car along with a hydraulic e-brake.

A few other cars previously seen in episodes are the SEMA UTE build along with its GTO donor car, Scotto's Audi Coupe Quattro, the tank which is powered by a Chevy LS3 V8 engine along with King suspension. Hoonigan's Hertrech "Hert" Eugene Jr., Vinny Anatra, and Brandon Kado's cars the TwerkStallion, BMW E46 M3, and Honda S2000 have been featured extensively on the Hoonigan's series Unprofessionals and Field Trip.

The most unique build, which tries to change peoples lives has to be Rob "Chairslayer" Parsons and his hand control driven race car. He is bound to a wheelchair as a result of an accident and uses his car as a lightning rod to get those in wheelchairs a chance at driving a race car through his foundation, The Chairslayer Foundation.

Check out Hoonigan's Project Cars Update Daily Transmission episode below for a look at more of the Hoonigan crews' cars.