It had to be dragged through the brush and a lot of water during the recovery. 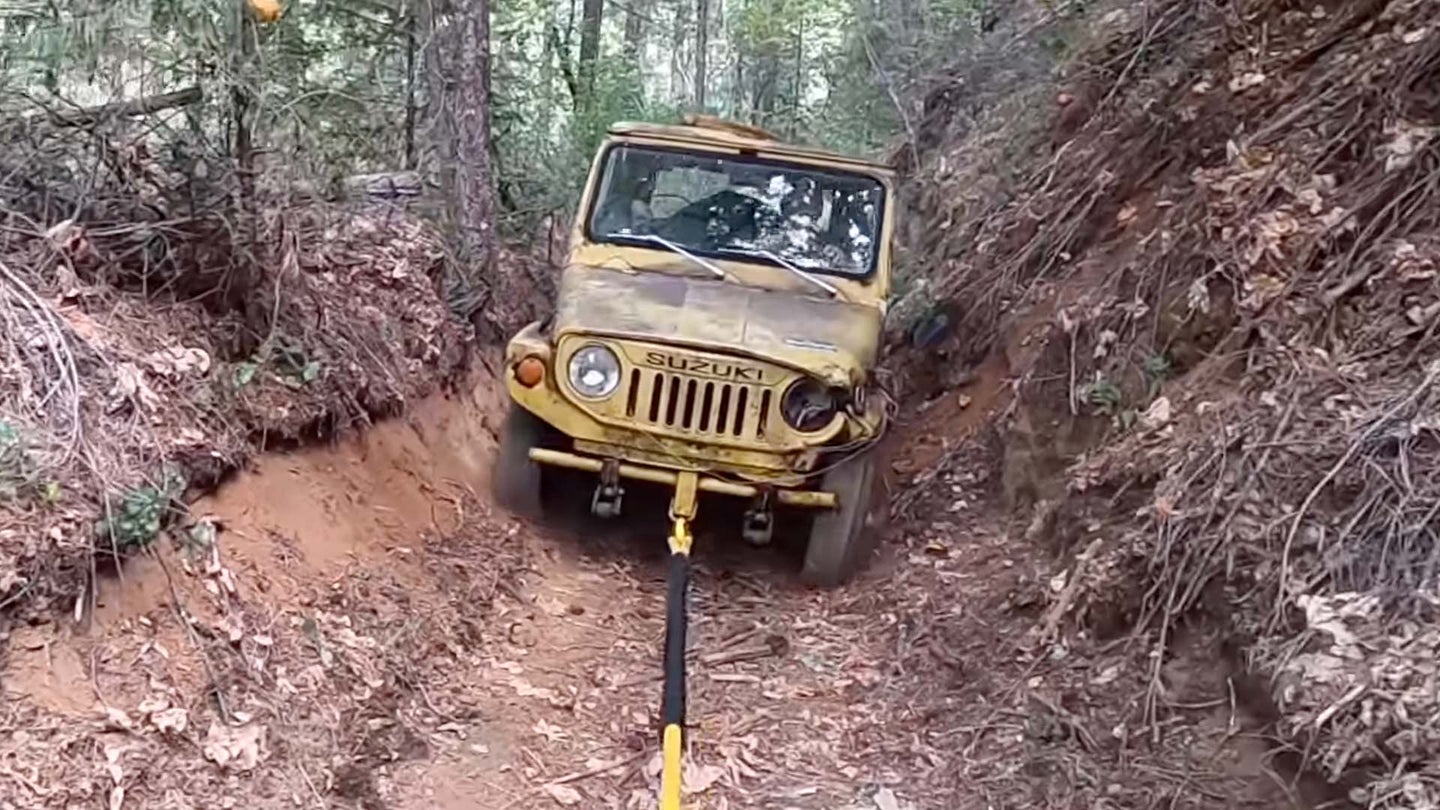 Forget a Klondike Bar; the greatest test of desire is what someone would do to get their hands on a beloved Suzuki Jimny 4x4. Some would go to extremes to acquire one, like going off-grid down a disused mining trail in the Sierra Nevada Mountains to recover one that has been stranded for almost half a century.

Such an extraction was chronicled in a trio of videos from Matt's Off Road Recovery on YouTube, which was tipped off to the LJ20 Jimny's location by its owner. As he tells it, he drove the Suzuki up the trail 47 years back while working on mining operations in the area, only to have the vehicle isolated by a landslide. He offered to sell his Jimny for a pittance to the recovery team, which appropriately christened it the Golden Nugget.

The team scouted the route on foot, finding the mining trail narrow, overgrown, and in some parts impassable to vehicles, with rubble strewn across a path that sometimes amounted to no more than a drainage ditch. Yet over the river and through the woods to the yellow Suzuki they went, reaching the teensy off-roader is unsurprisingly rough shape, with a weathered body and a seized engine.

They determined its recovery doable, though, and returned in their yellow XJ Jeep Cherokee recovery vehicle, nicknamed "Banana." The Jeep, which the Suzuki's owner said was the biggest vehicle ever to drive in there, could barely make it; the trail was so tight that it had to drive at an angle to avoid slipping off the side, and at one point even leave the trail to circumvent a tree blocking their way. After traversing an absurdly rocky ex-road by the riverside, they finally reached the Suzuki and strapped the two together.

Recovery was complicated by the Suzuki's decrepitude, its brakes nonfunctional and its steering barely working due to the deteriorated tires. Even so, the Jimny did alright until it had to be winched through the water, at which point it submerged and got caught on a rock that smashed in its headlight. That wouldn't be the last damage the team sustained, either, as after it freed the Suzuki from the water, they knocked out one of the Jeep's taillights on a rock.

Nevertheless, Matt's Off Road Recovery got the Jimny on their trailer and paid its owner $10 more than he originally bought it for back in the day—$210. And now that it's in their hands, it's probably about to live an even more adventurous life as a recovery vehicle than it ever did before.