Car Bibles Got a 2005 Subaru Outback and It Exploded Immediately

Plus, off-roading a new Range Rover and cleaning out a disgusting Chevy Cruze—here are the best stories of the week on our sister site Car Bibles. 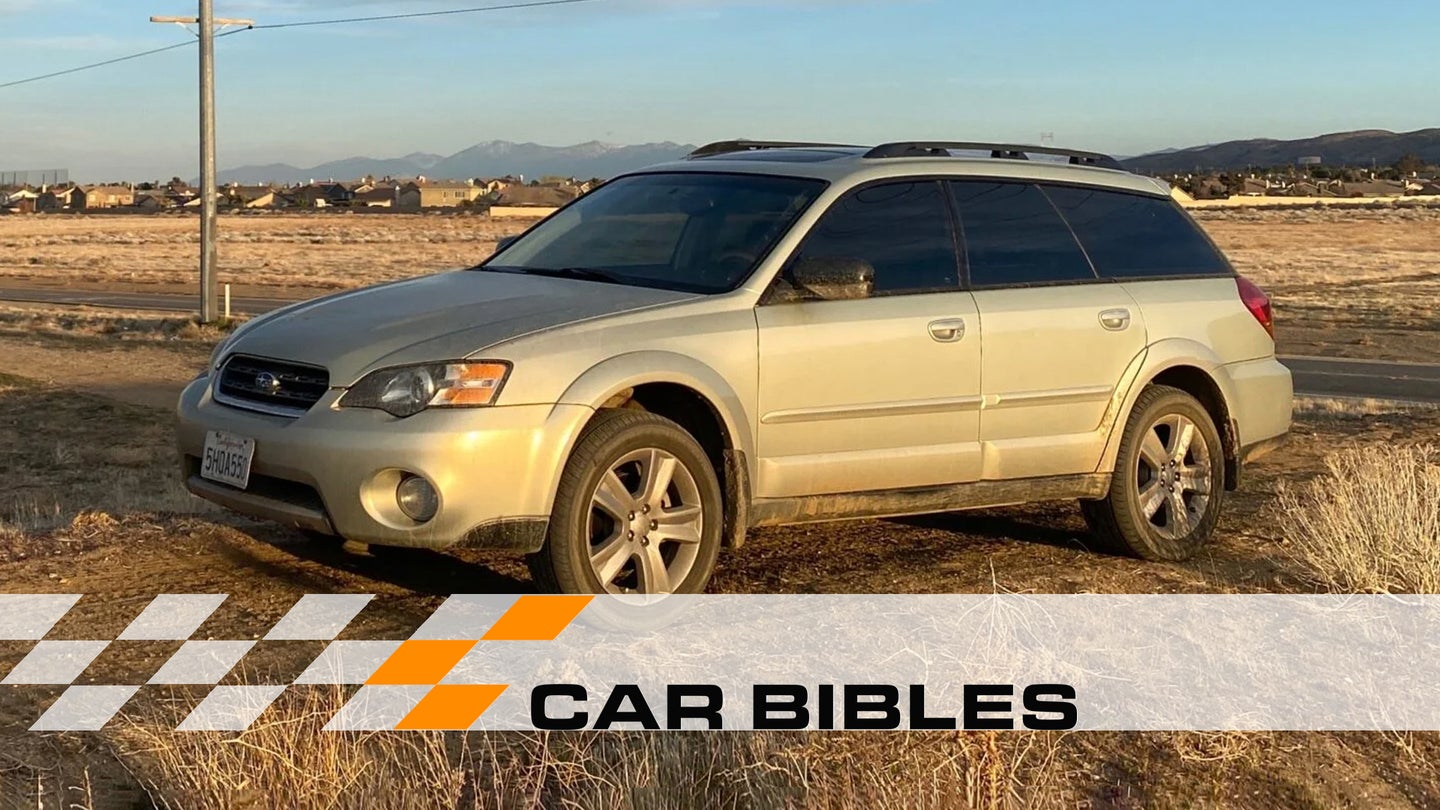 It seems to me that Subarus have a reputation for being both great and terrible. They're essentially the official car of both the Pacific Northwest and New England, yet I also keep hearing that they eat head gaskets like wear items. Car Bibles' Chris Rosales took a leap on an old a Subie because he "wanted a truck and a flat-six engine," but he ended up doing a lot more wrenching than wheeling.

Here's a rundown of a few Car Bibles stories we threw up this week, including that Subaru explosion one, which I think you'll really dig.

As Editor-In-Chief of the new-for-2021 Car Bibles, I'm doing my very best to spread the word about it and get car fans like yourself to check it out. The Drive's editors have graciously allowed me to start this new weekly column on their site calling out the week's Car Bibles highlights, so please enjoy my favorite stories from this second June week!

Car Bibles is generally focused on DIY-related content, practical advice, cultural commentary, and automotive entertainment celebrating low-to-medium budget motoring. We generally publish five posts a day, including a feature photo, so if you like what you see below I would love to see you over on our site to check out the rest of it! Anyway, on to the roundup:

Kevin Williams did a lot of miles as a rideshare driver, and has some sage knowledge to pass down to anyone who needs to relieve themselves on the road. Well, not literally on the road, ideally. Starbucks, it turns out, is generally the best public place to take a dump. I made the accompanying artwork and I'm very proud of it. Should we make this into a sticker?

Range Rovers are common as Camrys in LA traffic, but despite their branding leaning on "adventure-luxury" vibes you very rarely see one actually go off-road. That seemed like all the more reason to take the vehicle thorough the natural obstacle courses at Hungry Valley.

Our writer Peter Nelson got his hands on this high-feature Rover and got to use its deep array of traction control toys. He was excited to confirm that they're not just gimmicks – despite being loaded with a raft of luxury appointments and tires that had no real business scrambling around sand, this six-figure SUV did pretty well.

I Bought a 2005 Subaru Outback and It Exploded Immediately

Chris Rosales went with a six-cylinder Subaru from the mid-'00s instead of a four, partially because he wanted to avoid the head gasket failures common with the smaller engines. Well, that didn't really work out like he hoped. This will kick off a miniature saga, stay tuned.

When I Was Nine, I Thought I Accidentally Bought a New Dodge Neon

If you grew up with the early internet, you might remember how mind-blowing the first "build-and-price" car websites were. For those of us who wasted after-school time changing the colors and configurations on Hondas and Dodges decades ago, this might ping some nostalgic memories.

Our writer Kevin Williams made me smile with this silly story about how when he was a boy, he was terrified to make it to the end of one of those build-and-price configurations for fear of accidentally ordering a car.

I Made $500 Saving This Sad and Disgusting Chevy Cruze

This week's entry into Kevin's Flippin' Out series is a rundown of how he bought a roached manual-shift Chevy sedan, cleaned the heck out of it, fixed a whole bunch issues, got to drive it a bit, and then passed the car along to a new owner.

There's an animated GIF of a vacuum sucking filth from the seat. Come on, you can't miss that!

Every day we run a Feature Photo post, which is just a nice picture and little story providing some context to the shot. Sometimes we talk about the car(s), sometimes we just pontificate using the picture as a prompt. I really liked this picture in particular this week because the framing has such a satisfying cut to it – the sharp angles are so orderly. The maroon paint job really pops on that BMW 840i, too. What a handsome-looking predator of a car.

If you liked any of those stories, I hope you'll join us on the regular over at Car Bibles. Our comment section's always open and we'll be doing a lot of experimenting throughout the year as we look for new and fun ways to bring automotive entertainment to you. Now, have a great early summer weekend.