Subaru may be known for its pet-friendly interiors, but this one couldn't stand the bear-and-tear. 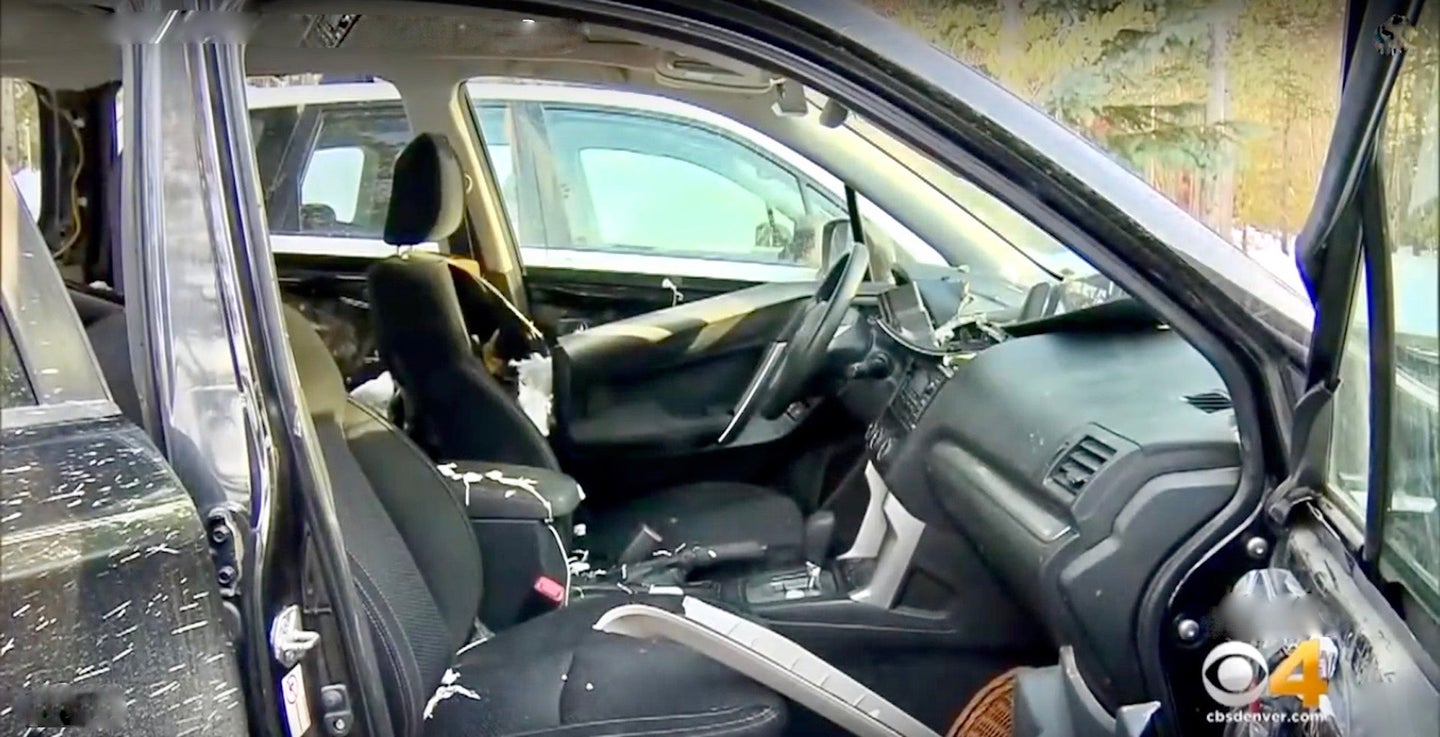 A Breckenridge, Colorado woman's 2014 Subaru Forester was trashed by a bear after she forgot a package of gummy bears in the car overnight.

Cate Siegel recalled the incident to CBS 4 Denver, explaining that on Wednesday, April 3, she returned to her home in Breckenridge in possession of a gift basket, inside which was a sealed bag of gummy bears. Normally dutiful about keeping food out of her car—which can attract bears—Siegel's vigilance happened to lapse on the same night that a bear visited her neighborhood.

As reportedly suggested by a set of animal tracks meandering through Siegel's neighborhood, a bear went around trying to break into anything that smelled of food. As evidenced by trash strewn about neighbors' yards, the bear managed to get into a few garbage cans, though its real prize lay inside Siegel's unfortunate Subaru.

"He must have just got in, went back and got in the backseat," Siegel told the local CBS outlet, speculating that the bear may have been a juvenile. "I assume he's not too big because he was able to get into my car and maneuver around."

Whether the bear found what he was looking for went unreported, though it made its presence known by tearing up the Subaru's interior and leaving "a little surprise in the backseat." Siegel reportedly discovered the mess the next morning when she walked out to her car to find its hatch open, the insides gutted, and her garage door mysteriously open (the Subaru was parked outside).

"There was a garage opener in the car, [he] must have stepped on it and opened the garage door," guesses Siegel. "But luckily our trash had just been taken out."

Siegel saw the irony in having her car broken into for a bag of gummy bears, but the damage nevertheless made for a learning experience.

If you feel like you've read this story before—bear breaks into Subaru Forester in Colorado, wrecks it—it's because you have. A similar incident occurred in 2017 in Durango, Colorado, though in that case, the bear accidentally knocked the Subaru out of park, sending it straight into a mailbox. Bear burglaries are on the rise in Colorado, likely due to an influx of residents from out-of-state, many of whom don't know to secure their food or waste when in bear country. If you visit Colorado during bear season, be sure not to keep anything that a bear might want to eat away from your valuables, be they your family, your pets, or all-original Shelby Cobras.