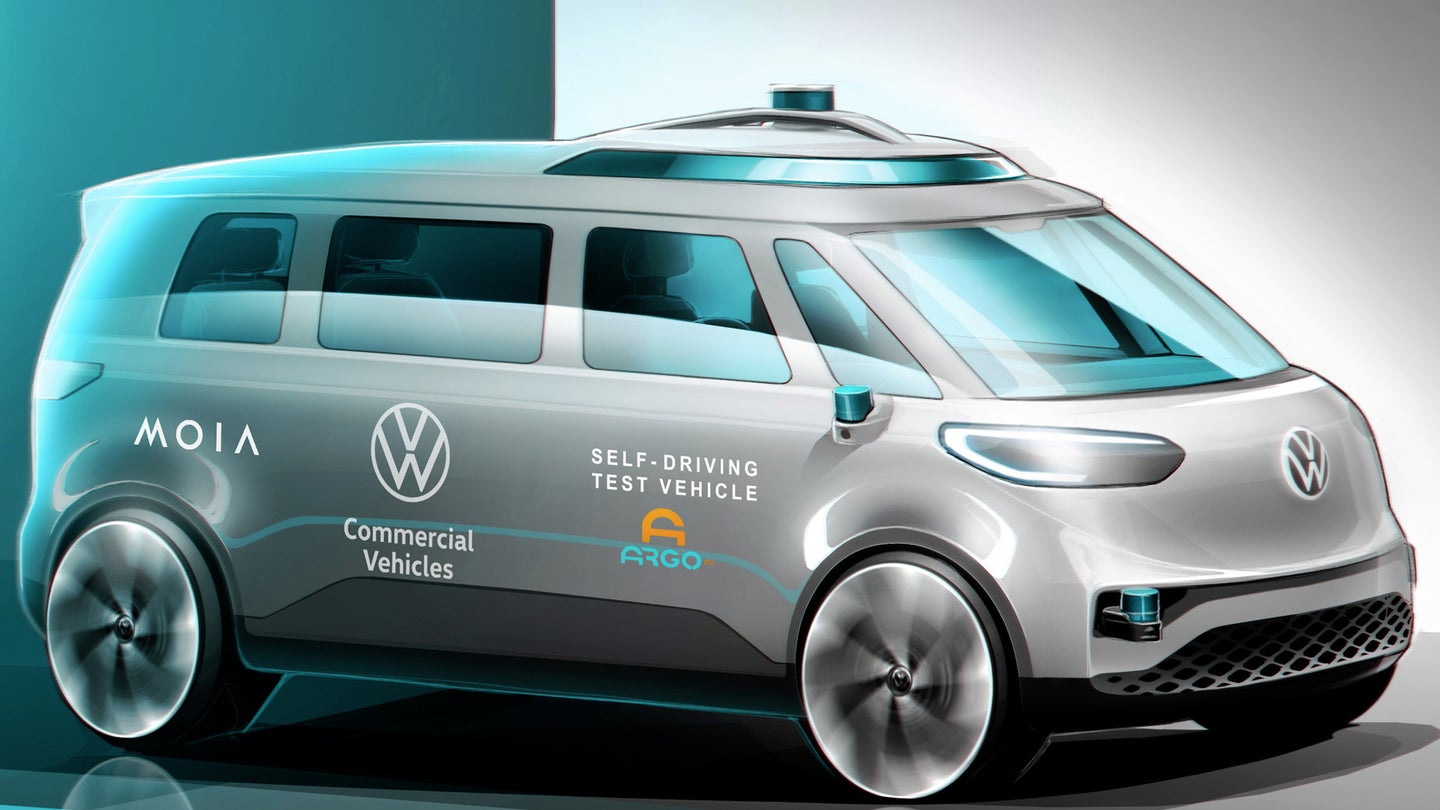 Volkswagen announced that the ID Buzz, its electric, autonomy-intended minibus, will be rolling out as a "robo-shuttle" of sorts to provide accessible ride-sharing solutions in cities thanks to Level 4 self-driving technology by 2025. Trials with autonomous ride-sharing company MOIA will be rolling out in Munich and Pennsylvania later this year, using prototypes of the ID Buzz.

The "digital driver," as VW calls it, for the ID Buzz is not yet complete. Neither, actually, is the car. VW is going to start building them next year but what the automaker is announcing today is that it's working with autonomous technology company Argo AI to build an ultra-ambitious self-driving system. That will be rolled out in specific urban areas by MOIA as part of its ride-sharing program.

Level 4 is a sort of autonomy that has been proven possible in a trial by AutoX in Shenzhen, China, where robotaxis really are driving themselves. It's defined as the vehicle having the ability for a human to override but otherwise being completely self-sufficient within a geographically restricted area. So the idea is that you tell the car it can go anywhere it wants in, say, Pittsburgh, and it'll be equipped with the knowledge and experience to cope with anything that's thrown at it.

Argo is literally throwing stuff at it, during the tests they're running right now in Pittsburg. Having sites in two time zones means engineers can get more running time to run what company founder, Bryan Salesky, says is ten million scenarios per day.

"At our track, we're recreating rain and weather conditions," he said during a call with the press. "We generate steam and fog like out of a sewer pipe. We have fake pedestrians, bicyclists, and motorcyclists that will jump out in front of our vehicle at the last minute and test to make sure we're handling those pieces correctly.

"And we even have what's called a mud cannon, which is a lot of ingenuity among our test engineers where we blast dirt and debris and our sensors and make sure that the cleaning systems are working correctly."

Argo's AI uses cameras, long-range lidar, short-range lidar, microphones, and radar to try and replicate the awareness around the vehicle that's needed. It tests its AIs by forcing them into "difficult" scenarios like complex interchanges, and although they're not there yet, Argo is confident it'll be able to roll out Level 4 autonomous drivers by 2025 and that the ID Buzz is the right platform to do it. MOIA is so confident in Argo's AI, it's already the first customer for VW's project, which is set to meet that 2025 date with a roll-out in Hamburg, even though Uber just had to sell its disastrous self-driving attempt. So, it begs the question, why do this?

"Vehicles with a digital driver enable access to mobility for really everybody, you democratize mobility is a service product," said Volkswagen's head of Mobility as a Service Christian Senger. "The digital driver will be even safer than the human driver. And as our commitment to electric vehicles mobility for cities can also be very clean, cities become more attractive to live in."

If only there already was any widely available form of accessible road transport around set routes in cities, eh. Oh wait, there is: it's public transport. The humble bus has been doing this job for decades without anyone thinking "the real problem with this is that it has a driver" instead of "the real problem with this is Some Weird Guy is speaking to me again, oh man."

Buses already have kneeling suspension so they can bend down to make a wheelchair ramp easily accessible; they're also big so that you can fit lots of people on board, and they're widely available in urban environments. VW says that 50 percent of the ride-sharing market lives in 10 U.S. and European cities: LA, New York, Chicago, Atlanta, Dallas, Houston, Miami, Boston, and Washington D.C. in the States; and Hamburg, Barcelona, Rome, Madrid, Paris, Naples, Milan, Berlin, Athens, and Vienna in Europe.

As The Drive's European staffer, I had to check with the rest of the team if the U.S. did, in fact, have buses, in case this was some sort of massive baguette moment for me. But yeah, you guys do have buses. You got 'em. Hamburg actually has a pretty extensive public transport system in the efficient stereotypical German way.

So, obviously, I had to ask VW if they weren't just taking a long route to reinvent a short trip on public transport. CEO of MOIA Robert Henrich gave me an answer: "Well, the main difference is that MOIA is on demand. Buses are, as a vehicle, typically large and follow fixed routes. On the other end of the spectrum, I would take a taxi, for example, as a small vehicle, a passenger vehicle with only one passenger, most of the time, onboard, and the MOIA model sits in between."

"We are on-demand, we are as flexible as a ride-hailing service or taxi but the vehicle is a bit larger and if possible, without doing too much of a detour, we are really then pooling passengers to increase the efficiency. So it's really something somewhere in the middle, the flexibility and the convenience for the passenger are very comparable, I would say, with a taxi or ride-hailing service."

For anyone who's ever been to eastern Europe, that does at least clear things up a bit. They're not inventing robo-buses, it's the worrying concept of removing the chainsmoking driver from a marshrutka.

Levandowski was sentenced to 18 months in prison but avoided serving any time as the pandemic delayed his start date.